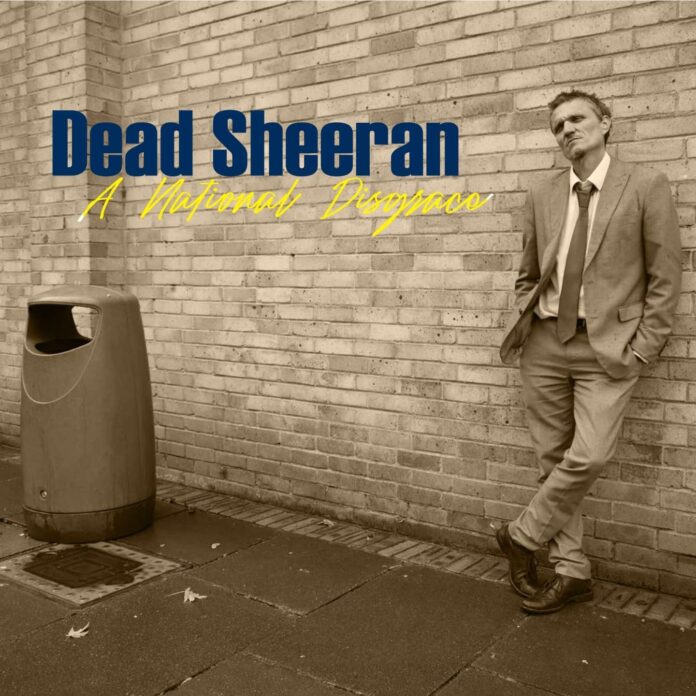 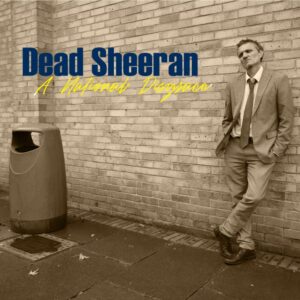 When the Fonz appeared it seemed to be a brilliant one-off by a one-man lock-down parody-of or tribute-to Sleaford Mods. Then came the Dead Sheeran EP/mini-album – minimalist, protest-music with no guitars, that was as savagely funny as it was deadly serious. Now a full album which is even better…  Parody-of a rock-critic Ged Babey is a one-man-fan.

The problem with this country is its full of fucking twats…

Sharpest, sweariest, funniest, lockdown album of the year.  Punk Rock laptop hiphop made by a 50 year old bloke who treads a fine line between polemic, pisstake, profanity and profundity.

I love Dead Sheeran: a boxing coach called Paul from Herefordshire who used to be in hardcore bands in his youth. He started this project to relieve the boredom of lockdown but it’s turned into the most successful thing he’s done in music.

Dead Sheeran performs a quite brilliant balancing act: A ‘Novelty act’ with gravitas who can simultaneously address the State of the Fuckin Nation through socio-political observation AND rip the fucking piss out of it and laugh in the face of everything – because you have to laugh or you’ll fuckin’ cry.

It’s genuinely angry too. But when you get so angry with the way people are treated – you have to use that energy and rage to create… and there’s no time for subtlety and irony when you can use the blunt instrument of loads of big and clever swearing, some laptop beats and simple tunes.  But even whilst you are doing it, you realise you have become a cliche – so you target yourself as well as everybody else…

Dead Sheeran is a fuckin’ genius. Fifty years of pop culture from TV comedy to anarcho-punk to hip-hop (the Two Ronnies ‘topical’ pastiche song-sketches to Crass via Eminem and the Sleaford Mods) all encapsulated in his work. Protest and Survival that you can dance to, whilst pissing yourself laughing -so that you don’t put your fist thru the screen every time Boris appears…

A prime minister making more U-turns than one of those 2005 Sat-Navs. No direction.

Half the songs are explicitly about lockdown, covid, government failures but the rest cover local issues like fly-tipping and acquaintances influenced by tabloids. There is a response song to his own 80’s nostalgia song and a very personal accounts of an everyday supernatural experience and a bit of self-deprecating self-analysis.

There is a lot of fuckin’ swearing on this album. But it’s equal parts real frustration and for-comic-emphasis.

The album starts with the Summer of 2020’s singalong feel-bad anthem –Can Things Get Any Worse?   It’s like that awful D:Ream song in reverse.  The Tories are verbally annihilated for their handling of the pandemic but scorn is saved for the gullible public who voted them in. With more F’s than Bodies.

(I’m An) Interesting Bunch of Guys is the most revealing song about the split personalities of the man behind the music.   I’m a working man, I’m a boxing fan ….  And I’m an expert in absolutely nothing  / But you’ll never quite figure me out /  I’m a chancer, romancer, an overnight flop…

Kicking Off In The Streets  has the downbeat vibe of something by Anarcho-punks The Mob, with added beats by Tone Loc and a touch of Erik Satie on piano.

Counter protest gammons proudly stand beside the statues / Of historical figures that they never even heard of.

As usual though there is an ever-present pathos with lines like  We had nothing in the first place, so we got nothing to lose

Pick For Britain picks up on the short-lived campaign to get furloughed workers to work in the fields for minimum wage.

The Problem With This Country is a 2020 equivalent of ‘The Great British Mistake’. It’s hard work being us sometimes cos we never fucking learn..

They’re All Laughing At Ya   -a neatly titled tune about the state of paranoia and lockdowns effect on mental health.  A mix of pathos and parody with some great violin and synth lines. The deft skill of the arrangements is easily overlooked because of the content.

Doesn’t Make me A Sinner is a melancholy confessional with a vibe of Mile Skinners The Streets. The song which gives the album a humanity amongst the profanity.

Now I’m not convinced that I even believe in God
I’m still not sure if I saw an angel or not
And being a better person, well I’m trying
But i do know I’m scared of dying

Who’s That Twat? is a song a lot of us can probably relate to, much as we’d rather not admit to it. Being about someone you know who falls for all the tabloid shite and feels compelled to regurgitate it instead of actually thinking about it.

Who’s that twat / Spouting right wing bollocks / He can fuck off, he can fuck off / I know he’s ‘a mate’ but he can still fuck off.

Keep Your Distance is a hilarious no nonsense message to anti-maskers, anti-vaxxers and twats-in-general.  Stop your fucking whinging its a piece of fucking cloth. / Its hardly a fucking aqualung / So stop your mouthing off

Sleaford Mods were just the starting point for Dead Sheeran – slapstick anarcho-laptop-punk rap’n’rant is a sub-genre just purpose-built for him.  Pissed-off, righteous and funny as fuck..

Dead Sheeran is the dogs bollocks. The one album which makes you laugh at the impotence of the collective rage and feeling of desperation in the UK in 2020. He doesn’t have answers, he doesn’t even know the fuckin’ question.  But he is some kind of accidental genius and a vital antidote to the misery of 2020.

Lyrics reproduced by kind permission of the twat wot wrote them.