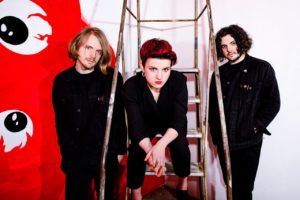 Rare is the ferocious new single from Leeds rock trio Dead Naked Hippies. The three-piece thrashed into life in late 2016 and I reviewed their debut single here for LTW around that time.

Alongside  band  mates  Joe Clarke  (guitar)  and  Jacob Marston  (drums),  vocalist Lucy Jowett can  express  and  tackle  her  own  internal  issues, whilst Dead Naked Hippies  offer  a  space  for  others  to  do  the  same.  Rare was released on August 29th and was produced  and mixed  by Matt  Peel  (Pulled  Apart  By  Horses,  Eagulls,  Menace  Beach) and mastered  by Robin  Schmidt (Placebo, Maximo  Park, Our  Girl).

This is Lucy expanding  more  on  the  band’s  mission,  and  where  latest  release  Rare fits  in:

Ok, back to the single and a gorgeous infectious bassy riff launches this track. Drums come in and it’s reminiscent of DFA’s throb. Jowett’s vocals start and they yelp and howl over the ensuing noise. You can immediately hear Jowett’s frustration, anger and passion in these opening seconds.

The chorus is joyously noisy and brilliantly sung by Jowett. This is when the three of them come together for that one unifying job. To make an almighty racket, yet one that has a beat and a punch the air refrain.

The breakdown half way gives some rest bite, until the band come back in with the drum and guitar combo that shreds with Jowett’s pained vocal delivery.

Rare is a promising start to their new campaign and one that leaves me wanting to hear more from the DNHs. Hopefully the follow ups will be in the same bouncy noisy vein as Rare and cement the sound of this talented and tight band.