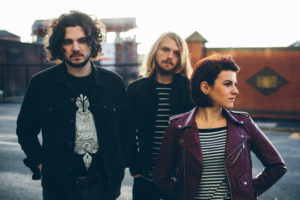 Louder than War get a listen to a debut single from Leeds’ Dead Naked Hippies.

Produced by Matt Peel (Eagulls, Pulled Apart By Horses, Autobahn), ‘Lights Out’ is a first glimpse into the raucous sound of Dead Naked Hippies.

An absolutely thunderous riff starts this romper and it just doesn’t let up. Insistent and relentless drumming kicks in and you get a really good feeling about this band in the first 30 seconds!

The noise and ferocity of the track builds up and up and the passion comes across in front woman Lucy Jowett’s vocals. The way she sings/shouts/screams “can’t put your finger on it” and “you just say” shows the integrity and balls this band have.

Coming from the mighty Leeds and having such a great producing pedigree behinds them, this band is surely one to look out for. Oh and the name is great too!

All words by Ioan Humphreys. More writing by Ioan can be found at his author’s archive. You can also find him on Twitter at @ioan_humphreys