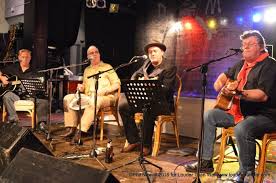 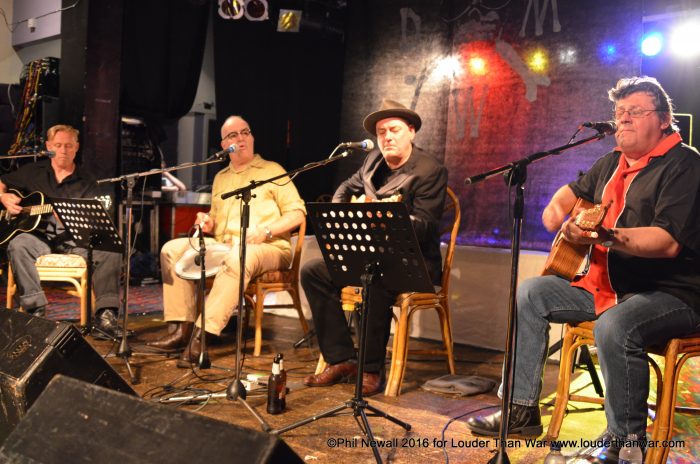 I’ve never been to Darwen. It had a feel to it that I sort of expected for whatever reason – it was cloudy, grey and very quiet. I did notice the biggest Wetherspoons pub I’ve ever seen. It was a Sunday night and I just thought how strange it felt being here, to see such an impressive line up of Punk and Post Punk Rock legends in such a quiet, seemingly far flung town. The seated venue was surprisingly ok and I liked it. In fact, it was ideal for the night ahead…and so was Darwen as it turned out. Chatting to a local lad at the end of the gig, I learned that there is a thriving Punk scene in that area, with several bands on the local circuit. He was genuinely delighted that I’d travelled up from Manchester, along with my friends from Knutsford, supporting the venue, the scene and the town.

What is it though with people chit chatting at acoustic gigs, during the performance? Some in the room were chatting so loudly, they presumably thought it was the music that was the disturbance! It’s rude and inconsiderate and needless – if you want to chat, go outside to the bar. Tonight’s support act Skeletal Family Acoustic felt the need to make these very points – whilst, I may add, delivering a most enjoyable set, akin to associated (in one way or another) bands Ghost Dance and March Violets.

I’m not very familiar with Skeletal Family, but on the strength of this set, I plan to make myself more familiar.

We kick off with Something That I Said, followed by Nobody’s Hero and then on to The Price. I was fascinated by Kirk’s story about this classic SOD tune and the National Union of Mineworkers reference, who cited the track and lyrics as an inspiration

There was standing room only and on we went with Love in Vain, smoothly moving into Police and Thieves, much to the delight of the capacity crowd. We were in full swing and we hung on every word as each of our hosts recounted stories about the songs they were about to perform. Wasted Life, new Ruts DC track Kill The Pain and then My Dark Places, a song written by Jake Burns regarding his suffering from depression. His message was loud and clear – don’t treat depression as a stigma, to be swept under the carpet. Talk about it and be open about it, because that’s the first step towards recovery. I agree.

Another good story from Jake Burns related to Paul Young’s original band The Q-Tips. I remember their single SYSLJFM (Save Your Sweet Love Just For Me) in 1980. They didn’t last very long in that form as Paul Young went solo in 1982 and launched his massively successful career with Wherever I Lay My Hat. Anyway, they were friends with SLF at the time and were the “horn section” on the Silver Lining single. SLF invited the Q Tips to play the song on stage with them at a Rainbow gig, but were horrified when they came on stage in their flash blue suits. The Q Tips were equally horrified when subsequently covered in spit by the Punk Rock crowd – it was the one and only time SLF used a horn section!

We were approaching the end of the night and the classics kept coming – SOD’s Never Take Me Alive was perfection. It’s one of my all time favourites and no matter what was to happen after that, I would go home happy…but after that, it was Staring at the Rude Boys, which is easily my favourite Ruts track and probably in my Top 5 Punk tracks of all time.

There was still time for Jake Burns to introduce Drinking Again (all challenges in life can be resolved by having a pint!) and Kirk Brandon to introduce the Theatre of Hate classic track Do You Believe in the Westworld?

We ended the night with Alternative Ulster (written for but rejected by a fanzine editor at the time, who was wanting a flexi-disc track) and the legendary Ruts track Babylons Burning, basically dedicated to the former Ruts guitarist Paul Fox. Jake Burns joked that it took all three of them to cover on guitar what he’d done with just one, showing how good Fox was. To be fair, it was a brilliant performance of a brilliant and timeless Punk Rock classic, on just 3 guitars, a drum skin and a pair of brushes!

And that was that. There was a pretend encore – we clapped and cheered for more, even though nobody had actually left the stage. Dave Ruffy has had a recent hip operation and it was to avoid him getting up, going off and coming back on again.

It may be struggling to walk just now, but Punk’s definitely not dead and on tonight’s evidence, it never ever will be.