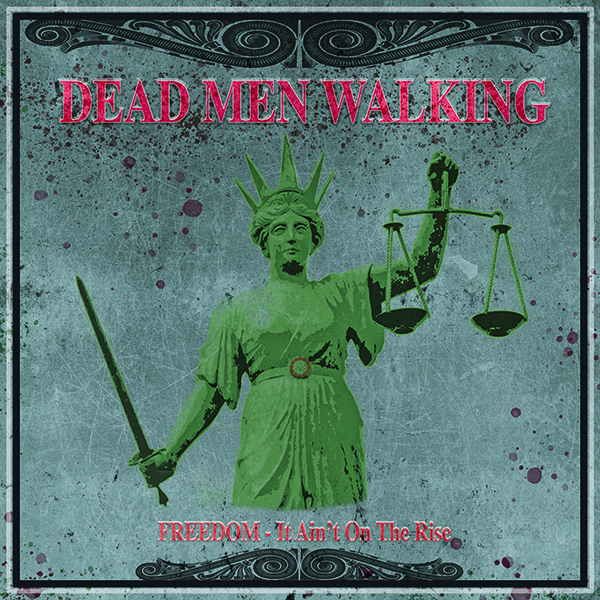 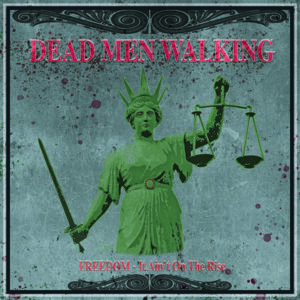 Dead Men Walking is the long-time side project of Theatre Of Hate & Spear Of Destiny founder Kirk Brandon; an evolving collective of friends from the punk scene that over the years has seen its numbers swelled by the likes of Glen Matlock, Slim Jim Phantom, Mike Peters, Capt. Sensible, through to Pete Wylie, and Billy Duffy; the current and seemingly stable line up consists of Brandon, Jake Burns from Stiff Little Fingers and both Segs and Dave Ruffy from Ruts DC.
From 2001’s eponymously titled debut album, a raft of further live recordings have been released, whilst Graveyard Smashes Volume 1 was the first studio recording, this was followed up in 2015 with Easy Piracy – sadly, both releases are nigh on impossible to get hold of, hopefully, Freedom – It Ain’t On The Rise will be more readily available.

We get thirteen tracks which includes four new Brandon and Segs compositions specifically written for Dead Men Walking during the recent lockdown, the restrictions demanding a non-traditional approach to making the album – Ruffy, Segs and Kirk recording their parts at Pat Collier’s Perry Vale Studio in South London and Jake Burns recording his contributions at his home studio in Chicago. The album was then mixed in Brixton by Greg ‘Wizard’ Fleming.

Opener Dorothy being one such track, an atmospheric beginning that is sonically similar to Paul Simon’s Diamonds On The Sole Of Her Shoes before transitioning into a more typically Spear Of Destiny rabble rouser, Brandon takes the vocal lead whilst Dave Ruffy provides a strong propulsive platform for that infectious guitar riff, the backing vocals of Segs and Burns fleshing out the track.

Most people will be familiar with Ruts DC in the acoustic arena, their Rebellion sets are a highlight of the entire weekend, and with this years ElectAcoustic Volume One album, that transition from full on electric to acoustic was finally captured, however here with Kill The Pain the inclusion of Brandon and Burns has added further emotion to the track. Segs leads the vocals, his maturing voice is a joy – yet Brandon’s distinct notes dropped low in the mix seem to add width to the entire piece; similarly with Stiff Little Fingers Guilty As Sin from the bands 2014 No Going Back album. I have seen this performed live, it was presented in a semi-acoustic fashion, though here as Dead Men Walking the levels of both musicianship and production are faithfully captured, this is a joy to hear.

Both the mournful Man Down and Blame are new tracks, the former, a slow paced, brooding piece that retains more than enough menace to keep those punk rock credentials intact. Blame sees the pace increase, once again Segs providing the vocal lead as the track seems to widen as it plays whilst also providing the title lyric for the whole collection – the guitar work of Brandon and Burns is magnificent, sitting atop Ruffy’s beguilingly relaxed drumming.

Brandon reaches back to 1988’s The Price You Pay album to revisit The Price – the album was not well received and came immediately prior to the bands dissolution, however the track does make occasional appearances within the current Spear Of Destiny live set and for damn good reason; this is arguably one of Brandon’s finest compositions and to have it revitalised in such a fashion is a treat to behold, clearly the originally featured brass has gone, but the inclusion of a Spanish tinged guitar is a delight as it compliments Brandon’s throaty roar. Jake Burns also leans back into his more recent archives, once again revisiting the No Going Back, this time for My Dark Places, a highly emotive number that in the DMW live set will become an instant crowd favourite. Golden Boy was the Ruts DC ode to Malcolm Owen and was released on the bands Music Must Destroy album, apparently a favourite of Kirk Brandon who insisted that it be included within this project; somehow this partnership have added to the originals fragility, yet at the same time the track oozes power – breathy vocals, glistening guitar, distant drums shimmering – as soon as it fades, hit repeat!

Dave Ruffy got his way selecting Slave from Theatre Of Hate’s 2016 Kinshi album, presented here in a very welcome ultra-stripped-down version with loads of percussion to accentuate the track dynamics. The whole album is neatly wrapped up with a track from each artist, we gets The Ruts Staring At The Rude Boys, Spear Of Destiny’s Never Take Me Alive, and SLF’s Wasted Life; despite being played acoustically by Segs and Ruffy for a number of years Dead Men Walking are still able to bring something new to Rude Boys, the song retains is familiar pattern and structure yet new accents of colour are added, likewise with Spear Of Destiny’s Never Take Me Alive which whilst being instantly recognisable is still able to bring something new to the fore all of which is testament to the musical talents collected here.

Wasted Life is the perfect album closer, stripped away, Jakes vocals still retaining just enough of that familiar rasp, a lilting mouth organ fitting perfectly, Ruffy’s subtle drumming – this is so far from the aggression of the Inflammable Material days, yet the track has taken on a whole new level of poignancy.

There is no dominant force within this recording, each of the artists involved have a clear respect for each other, genuinely acknowledging their respective talents, each allowing the other room to breath and that is why this album works so well.

The Covid lockdowns were hugely impactive, countless lives have been, and are still being lost, business failed, futures were ripped from people, yet out of it treasures like this album are beginning to emerge. It would be foolish to suggest that an album can be some sort of panacea for it all; that said Freedom – It Ain’t On The Rise will bring a smile to your face and shows how that working collaboratively really can overcome whatever difficulties arise.