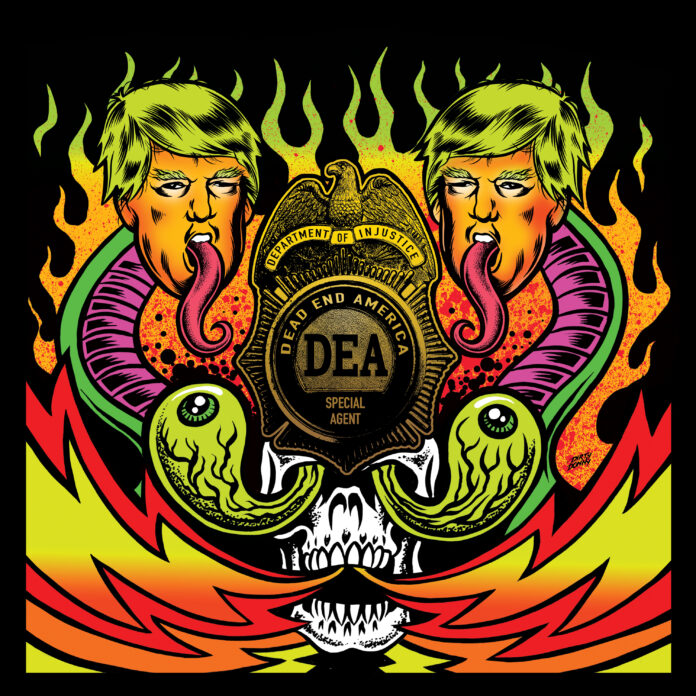 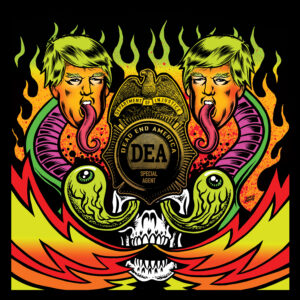 There are no other ways to describe the sound of Dead End America than comparing it to the combination of The Accused and Poison Idea. Taking into account that both members of these bands contributed to the creation of the album, Crush The Machine, how else would it sound?

Even though Steven Hanford tragically passed away this May, his child continues to live. Formed by Hanford and guitarist Tony Avila (World Of Lies, Why Won’t You Die, Aborted Cop), the Dead End America was later joined by various members and collaborators – such as Ian Watts (Minmae. Ape Machine), Nick Oliveri (Mondo Generator, Kyuss, Queens Of The Stone Age), Mike IX Williams (EyeHateGod] and Blaine Cook [The Accüsed A.D., The Fartz ).

It’s not much about the members, but the collective sound they’re creating together – uncompromising nerve-wracking punk-rock. As powerful as an earthquake, an incredible melting pot of all the influences and styles these musicians brough to the table. Crush The Machine is released today through Southern Lord Records. I got the chance to speak to the members of Dead End America about their love of Poison Idea and formation of the band, about punk-rock attitude and first musical discoveries, about future plans and writing process.

LTW: Dead End America was basically started with the idea of collaboration. And at the beginning you didn’t have an intention to put out a record. How did it all come together for you?

Mike IX: Steve (Hanford) had thrown me the idea of singing on a track for this project he was putting together during the lockdown and I of course said yes. I didn’t know how far it would go, but when Southern Lord picked it up it was on. I would never pass up the idea to work with Steve, a great guy with a great musical track record as well as being an incredible drummer.

Tony: Steve and I agreed to do a COVID-project and within a week of agreeing the songs were written and recorded. I thought it might just be him and me on it but while we were recording he started bringing up the names of everyone who ended up on it.

Nick: Steve “Thee Slayer Hippy” Hanford asked me to play bass on the 4 tracks that he and Tony had recorded. He also asked me to sing and write lyrics for one of the songs. Ian Watts had also recorded my band Mondo Generator’s last record Fuck It with Slayer Hippy producing it, had put down lead guitar on DEA and mixed the full ep. I then sent it to a friend of mine Greg Anderson who has a label called Southern Lord Recordings. Greg liked it and said he would gladly put it out! I then asked poster artist Dirty Donny to do the cover art, he said he would! I asked one of Steve’s old pals and a friend of mine, Mark Lanegan to do some liner notes for it and he gladly said “Yes!” as well! Not to mention Steve had put in a place Mike IX from Eyehategod And Blaine from accused A.D. to write lyrics and sing on tracks, and it was an honor to be on the same songs with such bad-ass-inspiring musicians. And being a friend of Steve’s, a huge fan of his drumming and Poison Idea obviously I’m more than stoked about Dead End America! 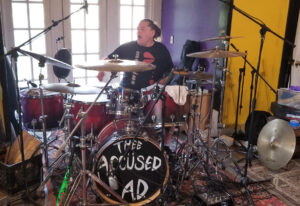 LTW: Mostly, D.E.A united different musicians within their love of punk rock. When you started working together – what it was like?

Mike IX: Like any other project starts, it all came very easily. I was anxious to work with Steve and Nick and now that I know the other guys it’s been a very natural process.

Ian: It was very natural. Things just came together quickly, because we were all on the same page musically and we love a lot of the same stuff. Also, Steve and Tony had a lot of vision ideas for the music.

Tony: It was awesome, seemed like everyone was aiming for the same thing and we definitely achieved something special.

Nick: Again, more than honored to be in the company of such hard-core greatness!

Blaine: When Tony contacted me about the songs, I was in. I’d been playing music with Steve for a few months before his passing. We had a lot of plans. This just seemed natural.

LTW: One of the things that amazed me within the single itself is that within each of the songs you used to bring different vocalists, whether it’s Blaine, Nick or Mike or Steve. But at the end, you don’t feel dissonance listening to all the songs. They sound true and organic. What helped you to reach a certain contiguity within these songs ?

Mike IX: I assume it’s because of a shared love for the music. Everybody here has put in some long years being in bands and being affiliated with this music, also all being friends with Steve brought a unity type of vibe since we all knew what we wanted this to sound like and to bring together his shared vision and ideas.

LTW: How did you discover hardcore\punk-rock itself ? What attracted you ?

Mike IX: Coming from being a childhood KISS-fan and loving stuff like Alice Cooper, Sabbath, Aerosmith, the Who etc. From two older brothers, I first got into punk in 1978 as a kid and never looked back. Hardcore in the 80s was a natural progression of that and later on in 84-85 or so, post-punk and thrash metal/crossover were the next exciting things to get my attention. Being an outcast weirdo kid back then drew all like-minded people like me together under a common banner of alienation, anti-authority and loud aggressive music. I never grew out of it.

Ian: I discovered it from Tony (laughs) – when we were kids and he had a massive punk rock record collection!

Tony: I got two of Corrosion of Conformity’s 80’s hardcore records and I was hooked! Back then you’d buy albums based off the cover art. Which is how I discovered The Accused. For example, I bought The Return of Martha Splatterhead…And went back the next day and bought their entire catalog (laughs).

Nick : Motorhead. I want to go see them when I was a kid. [In] 1986 I was into the crossover scene and I saw the original Cro-Mags opening for Motörhead. They came out and talk to fans in between bands which I never thought of a backstage before. But they were talking to us answering my silly questions and giving their time to us! I thought “I wanna play music. I know what I wanna do”. Life changing experience. Not to mention the guitar player was videotaping different shows in the crowd and stuff – I jumped in front of the camera wearing a Cro-Mags shirt with my long ass hair and I ended up in the video We Gotta Know!  Again life-changing! Years later, end up playing on a record doing a tour with John Joseph in the band Bloodclot – never would’ve thought in 1 million years.

Blaine: The intimacy compared to going to see big rock shows of the time. Being able to get right up to the stage and being part of it.

LTW: There are lots of music styles that sound dated. Like nobody would play new wave these days. Or at least, it won’t sound current or innovative like back in the days. With punk rock, even though the realities, and musical environment has changed, it still sounds the same. What makes it so current for you, these days?

Mike IX: Personally, for me, I’ve been immersed in heavy aggressive outsider music since the beginning. There’s no changing for me. Of course, I listen to tons of different types of music but rock and roll and punk is where I come from. There’s a lot of inauthentic bands making records these days But I know in my heart what’s real and what’s not.

Tony: Our vision was simple, mix classic Poison Idea with The Accused, no more, no less. I think we did a great job of doing that.

Nick: How I’m living. And the music and bands are the best outlet so I don’t go Postal. I still have a lot of passion for music, it’s not everybody, but it’s for me, and I can hold my head up when I walk into a room because I only play music that I enjoy and like and it makes me feel better about life! After all, life is short and music like 80’s hardcore and crossover makes it a lot better.

LTW: Within your musical careers you’ve always been putting that punk-rock element, punk-rock-type-of-attitude into what you’ve been doing as musicians and individuals. But it has always been mixed with various other tendencies. How does it feel to get to this style fully?

Mike IX: This Dead End America record is as fully realised as we set out to do and I’m very happy to see and hear the final product.

Nick: D.E.A’s Crush The Machine and Bloodclot Up in Arms are my two favorite releases that I’ve been part of. Indeed, it feels good!

LTW: Have you discussed what the end result may sound like? And in general, when you work on something, is there a place for discussion ?

Nick:  Yes, absolutely. Make the recording the best you it can be.

Ian: Definitely. Up front we discussed what we were going for and then attacked it as such.

Mike IX: There were some ideas tossed around as far as lyrics and concept. But I believe that through everyone involved we knew what we wanted…

LTW: What makes the music interesting are the dynamical changes? When you started your career, being musicians, what helped you to shape your songwriting skills ? Was there a song or a certain experience?

Blaine: Right there with Mike. Seeing Black Flag with Ron Reyes as phenomenal. Germs GI LP was a monster for the time. Hearing Discharge shortly thereafter…

Tony: I learned how to play by learning punk covers. Then later metal covers. By doing that, it totally shaped how I play and write my own material.

Ian: Simultaneously learning from punk covers. But also, metal and sixties rock. Kind-a covered the dynamic range between those and they all influence together.

LTW: There’s always some kind of balancing of chaos involved. Twitter Troll probably would be a good example of that. What helps you to find the edge between the melody and chaos, when you’re working on something?

Nick: Well, I try to always have a hook line or word that I can repeat for a chorus. Since the songs are short and to the point, I thought it would make sense to have kind of a group sing-along instead.

LTW: And finally – what are your future plans ?

Tony: Yeah, we already have something special in the works.

Blaine: Staying on the right side of the grave.

You can find more about D.E.A. on their Bandcamp.