Delta Echo 1 Festival was intended to be the first multi-venue one day event for Derby. Through a series of unfortunate events (like a venue catching fire and one of the original headliners splitting up) it scaled back with a reformed line up at a single venue.

People spill from the front of the pub and form an excited crowd for the man stood on the cobbles. The light from the windows and the squares of phone screens in each person’s hand provide a spotlight for what is about to happen.

The now familiar ceremony of oration begins and a murmur passes from person to person as individuals are picked to take up the baton, all eyes growing wide as the anticipated climatic moment draws near. The ice bucket is lifted and the big man squeals in the pleasure/pain ecstasy of freezing water cascades over him and slaps onto the street. Here then is your Facebook newsfeed in the physical world. Here, then, is the zeitgeist of summer 2014.

But rock n roll pays little heed to the fickle zeitgeist, to the myriad trivialities which catch the eye of the attention-poor masses (even those somewhere rooted in charity); it plays on regardless.

And so, in the back room of the Victoria Inn, the dark energy of live music pulsates as Paddy Considine, the frontman of headliners Riding the Low (and yes, BAFTA-winning Hollywood acting, film directing local boy too), high kicks to the beat and holds those choosing to point their eyes and attention at the real show, in the palm of his hand.

The Delta Echo 1 Festival was supposed to be a grander affair, finally bringing a multi-venue one-day music event to the small city of Derby. It looked to emulate the likes of Sound City, Dot to Dot and Swn, multiple gigs happening simultaneously in various venues. And it was all looking so good…then one of the main headliners (Twisted Wheel) announced they were calling it a day as a band and the biggest capacity venue, the council-run Assembly Rooms, was forced to cancel shows following a fire on the premises.

Rather than call the whole thing off organiser Micky Sheehan, owner of tonight’s venue, local music mogul and drummer in The Third Round, reshuffled and dealt a new hand for DE1 – no longer the multi-venue dream but a one location line up of mainly local bands. Regardless of the format it packed in plenty of raw, dirty rock and a decent size crowd to lap it up (well, when they weren’t pulled by the traction beam of an Ice Bucket Challenge at least). 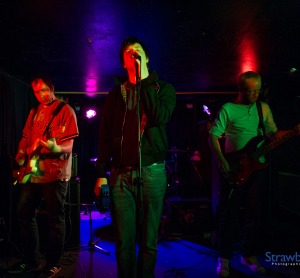 The Third Round, one of our bands to watch in 2014, are launching their self-titled debut album tonight. Lead singer Tom Walsh swaggers at the front of the small stage, the collar of a dark Harrington jacket popped and they play through a set on which the influence of the Stone Roses is clear but the vestiges of Oasis and even Depeche Mode are also woven.

Recent single The Sun Shines Miles showcases this with it’s leading bass line, rhythm that remains steady yet manages to shimmer and trip without being showy. The riffs too remain understated despite enough flourishes to picque interest and make this more than just another generic guitar band.

Eva Plays Dead also twist a number of well played elements into something exciting and compelling. Tiggy Dockerty’s vocal rips through the wall of sound built by the band, raw power at times barely harnessed by the classic rock sound.

The band have built a loyal local following and the crowd is shoulder to shoulder in the dark of the room as the musical power blasts over them from the stage. This is not an audience which is passively submitting while trying to keep ahold of their pints though. No, this is a coupling that means those massive riffs and unbelievably impressive vocal also have to hold their own against the energy of their audience. This is band who are quite something live.

That energy stays but curls like smoke into a new shape, a new feel, for headliners Riding the Low. Paddy Considine is a charismatic frontman whose presence draws potency tonight not only from the starry-eyed looking upon a familiar face from the big screen but also the resonance of local pride (he’s from nearby Burton). But this is only a part of it – anyone who doubts the authenticity of this band based on what they know of Considine’s success in other areas of his artistic career is setting themselves up to miss out on some really rather good indie rock.

This is the sort of music which has filled many a pub back room but with to the point riffs and refreshingly cliche-free lyrics Riding the Low have a collection of songs which rise above others in the genre, which manage to resist becoming overwhelmingly masculine like so many other guitar bands. This is a band that have swagger without needing to intimidate, who team chiming guitars with tumbling beats, and who take great pains to make un-fussy, straightforward yet intelligent and emotional rock.

DE1 may not have been the event intended for the city – one often overlooked by wider scenes, and that’s creative heart is beating stronger than ever – but it was a great line-up of bands nonetheless. It showed that even the sometimes hackneyed genre of rock is not fully explored, there are still thrills to be had from the right bands shining a light into that dark.