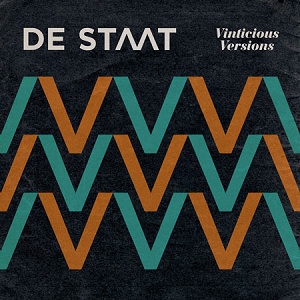 Vinticious Versions is a collection of De Staat tracks from their first three albums. It’s a strange beast. On first listening it sounds like a collection of novelty songs, silly and quite childish. It still does on the second, and the third.

There’s something not quite sitting correctly about it. Get It Together, the EP opener has some Eastern sounding instrumentation as does second track Build That Buy That. The later sounding like something off children’s TV. Being unfamiliar with De Staat, it’s difficult to see if that is the intention.

Input Source Select then takes us on a rap vocal in the style of The Beastie Boys. In fact the track is cheeky and has a slightly tongue-in cheek sound in the same way that the New York trio had. Drums have the characteristic hip-hop beat and the track itself is harmless enough.

The EP boasts to ‘take you on a trip down an alternative pathway’, but it’s not altogether clear where De Staat are going as Down Town has slightly 60s induced influences. Vocals are semi-spoken and grizzly and it’s appealing as the staggered female vocal makes up the hook line.

The group are big in their homeland and even performed at Glastonbury five years ago so they’re obviously doing something right, but to be frank, it’s hard to put your finger on what it is. The varying styles continue with All Is Dull, an attempt at a lethargic pop-reggae number which again sounds like the band aren’t to be taken seriously.

As Devil’s Blood plays a near homage to Charles And Eddie it becomes clear that De Staat don’t really seem to have a sound of their own, instead apparently journeying through varying forms of anything that takes their fancy.

Sweatshop is appalling as differing members of the group take a turn at providing voices, and Wait For Evolution (whilst having a great bassline) combines a rap vocal with a pretty fierce guitar providing probably the highlight of the EP. Unfortunately, it all seems too much too late and the effect has gone.

Maybe one day De Staat will return and say ‘told you so’ as they launch themselves onto every TV and radio show in the land, but in the meantime it’s all very peculiar.