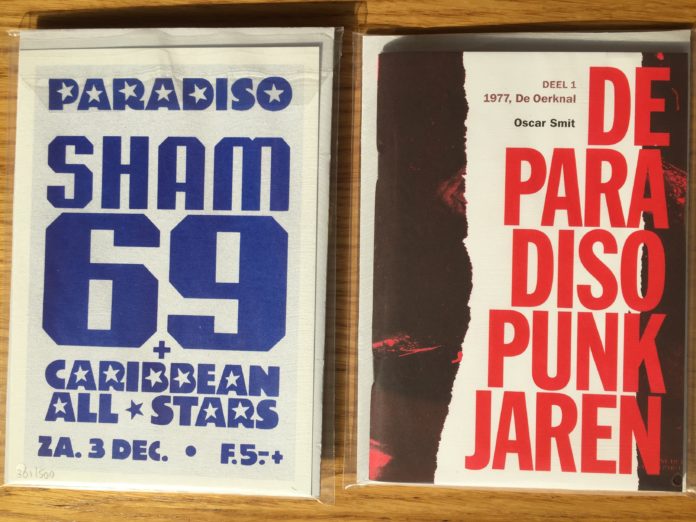 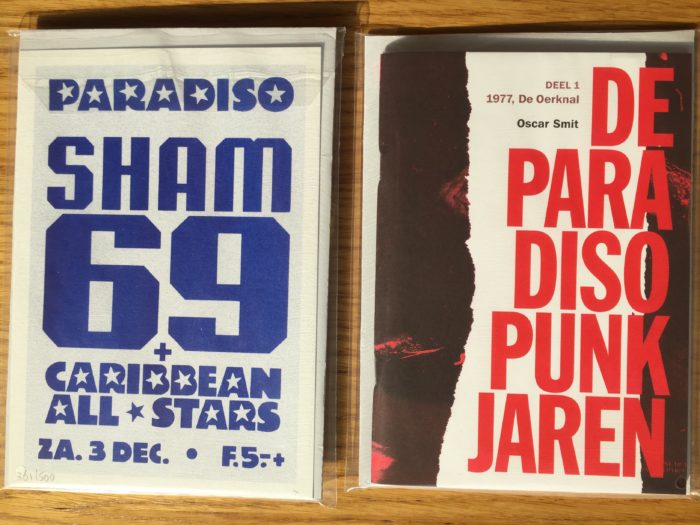 Punk and new wave scholars can do worse can check out a fascinating and ongoing series of slim volumes documenting the years 1977 to (I think) 1980 at the legendary Paradiso club, Amsterdam. Written by journalist and “scene head” Oscar Smit, they are exquisitely riso printed in an edition of 500 for each year (though it seems – due to 1979 being a bumper year there could be two volumes covering it). You also get a card with a repro of one of the famous simple posters the venue then traded in. 1977’s shows Sham 69, 1978 shows the Ramones and the 1979 card has Siouxsie & the Banshees from their “haughty” show of Tuesday 6th February.

The author, Oscar Smit is perfectly placed to tell the story. Back then Smit was a journalist on the equally legendary (if much lesser known) post-punk magazine Vinyl and worked behind the counter at the influential record shop Boudisque in the city. These days – due to an extensive reference library that threatens to take over his house – he is a dedicated keeper of the flame for those riotous years in the capital of the Netherlands.

So far so collectable. The only thing is they’re written, unsurprisingly, in Dutch which means those ‘die kennen geen nederlands’ and who want to know a little more about the history of this, the most international of the Dutch venues, will have to wait for a translation. It’s a shame as they’re worth a read in English, even only as primers or useful start points to flesh out – or anchor – a wider tale.

The tale of the venue itself for instance. This has partly been told elsewhere but is only touched on gradually, throughout the volumes as marker posts. Like its sister venue down the road, de Melkweg (Milky Way) the Paradiso is a building with a dramatically changing face and role. In fact a physical, visual, aural history of the Paradiso itself, as a building, would be a fine idea. (My inbox is open…) The Paradiso was facing an uncertain future in 1976, with debts, the threat of demolition (for a carpark), and, well, for being a smelly and uncool hippy hang out. A physical example of the mid 70s malaise that was called de Grote Matheid (the great sameness). In some ways punk (in all the socio cultural manifestations of the word), became both the Paradiso’s saviour and pilot for its later developments. But despite talking to many at the Paradiso, Smit’s image of the venue doesn’t make itself felt as it should for my money. Smit does conure up some illuminating vignettes (Nina Hagen using rooms there to practice at the height of her fame, the nearly forgotten hippy dude who hung out there and was only remembered when a boiler room fire threatened the building in 1979, the downbeat ambience of 1975), but these only leave the reader wanting to know more of the rhythm of the place, instead of appraisals around whether Buzzcocks’ 1979 show was great or not.

One final quibble. Knowing Smit (and his unquenchable enthusiasm for his subject) as I do, it’s noticeable that the books read a little perfunctorily, and – despite his very readable, simpatico style – feel cramped, as if trying to strip the story down to the essentials, so as to make these books possible in the format. Told chronologically, the volumes often list obvious “year highlights”, with the press clippings of the time acting as the main narrator. Despite the excitement of the new (something tangibly felt in the 1977 volume), the press can’t ever help being the press. In fact is there anything more embarrassing or revealing, retrospectively than a self-important or wannabe-witty live gig review? We get a list of differing reactions ranging from prophetic to utter nonsense. Whilst reading these at face value can be a tad wearisome, what is fascinating for the scholar is a maybe unintentional subplot. A clear picture of an Amsterdam music-loving audience emerges; one that is in turns super inquisitive, independent, thirsty for anything new and often fickle through being spoilt for riches, though one that sometimes displays rigid loyalties. And how these seem to play against the sniffy or over earnest reviews (each reviewer displaying a marked tendency not to be seen as square, and in possession of the right take, however controversial). In an illuminating passage in the 1979 volume Smit posits that the Police’s 1979 show wasn’t sold out because of their earlier 1977 show not being all that memorable. As such they weren’t the hot thing in town. Insights or educated guesses like this may be difficult to prove but they offer an insight to a wider feeling that “happened” around a band, something that doesn’t always translate well to a canonical narrative.

In the telling of all this, Oscar Smit is (nobly) mostly absent. We don’t really get his personal take on those times (apart from the introductions). As said, rather than staking his claim as “a voice” of the era he concentrates on telling a story of musical developments in and directly around the press that the venue’s gigs generated, fortified with anecdotes from Paradiso staff. The matter-of-fact way this story is relayed thankfully excludes much in the way of pop theory or ego. And one thought that sticks in the mind – maybe also an unintentional byproduct of this style of narrative – the fact that the Paradiso, along with de Melkweg, were often the centre of the Dutch international pop world (if not always the beating hearts, or centres of innovation). They were collectively, until these uncertain times, the first destinations (or quick pit stops, depending how much money your label could muster) on rock’s great European motorway for the Anglo-American touring bands. Hence the press, hence the stellar club nights, hence the fuss, and ultimately this ongoing series. I await the new volumes with interest.