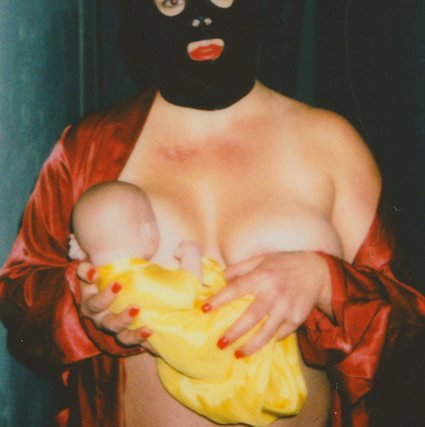 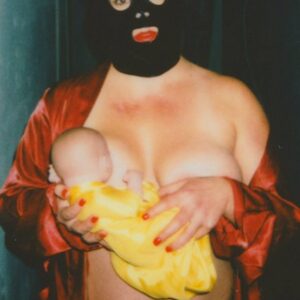 Steve John escapes the clutches of cellar punks Dboy and their blistering album New Records in Human Power long enough to report back.

Dboy come shrouded in mystery and a manifesto which has done the hard yards for the lazy writer with its commitment to ending ‘creative austerity’ and being prepared to ‘forfeit personal identity’. Soviet style internet imagery claims to be the work of a Kirill Kutcholsov from Moscow, but while top notch investigative journalism has unearthed links to Welland, Canada, Dboy really reside in a Pulp Fiction hinterland somewhere between the Hives and the Dwarves. Now the word on my street is that a Dboy peddles drugs, but out here in their province this stuff is delivered uncut. Put bluntly if you have no truck with gimp masks and a singer known only as ‘the boy’ or testifying that ‘rock and roll is what matters’ then it would be advisable to click away now.

With dissidents banished into Siberian cyberspace the true believers that are marshalled by Krill under the banner of the Dboy Scouts, can brace for the impact of a New Records in Human Power that is delivered with customary efficiency by Steve Albini. Clocking in at 17 minutes and from the ‘1,2,3,4’ that kicks proceedings off, the band deliver on their pledge of ‘short plays for the pace age’, with the sort of relentless dynamic that makes the two-minute marathon complete with guitar solo that is Money Talks seem like a double album with gatefold sleeve and art work by Roger Dean. The opening Why Do You Only Luv a Dboy (Who’s Down) making it immediately clear there is enough serrated tuneage and sheer brio to compliment the splay legged guitar. Indeed the body shock double barrel of Thumbless and Gimps Don’t Limp that races through in the slipstream would have been seized upon for a longer workout by bands with less to get off their satin clad chests, and White Denim, which rather than celebrating the Austin born breakdown band is an ode to their trousers.

Performance Horses slows down long enough for a stuttering riff and a ‘new world order’ which should resemble the one in which ‘Assholes, racists, bigots, sexists and dickheads will not be tolerated’. In what seems a band preoccupation the eponymous Hips rolls in on a rhythm which succeeds in getting them moving before the ‘piss and novocaine’ take over. Red Ultraglide is the single and comes sporting the band’s safeword sleaze in a video by underground mainstay Chris Paco and the sort of chanted spelling bee that doesn’t seem to have done Idles any harm. Dboy being so sure they got it right the first time, that the only concession to progress since their Live in Belem debut album, is to omit what sounds like the crowd from a seventies stadium rock act mixed in between tracks.

In boring old reality I’ve no idea know whether Dboy have ever set foot in Brazil, let alone recorded an album there, but prefer the myth making to the details. Sometimes the truth only being stranger than fiction because we haven’t considered something more exciting and Dboy follow in the grand tradition of creating their own universe by imagining it into existence. That Dboy Sells unashamedly ‘wants your money’ preparing the ground for world domination while being a readymade rebuke to the members of the party who cannot share their baby. Following swiftly on from this is Scavengers of Luv’s opportunity for ‘the boy’ to demonstrate a remarkably corroded set of pipes for one so young, before the band lock on for the sort of heads down no nonsense mindfulness which must elevate a Dboy scout to a place of peace in the unlikeliest of surroundings.

If their live offering was ‘The Most Important Album of Recent History’ in another band missive, then New Records is ahead by a Dboy yellow neckerchief this decade. In short then, as an avowedly 3-piece band that is dedicated to fighting the flab of the 4-minute song with self-imposed limitations, Dboy discipline promotes a resourcefulness that should avoid unintentional cliche by sticking a string section on for some easy option gravitas any time soon. The benefit of brevity being demonstrated one last time in the euphoria of standout track Love Will Always Find You which gives hope to all the deviants down in the dungeon, and as a ‘long’ playing record, leaves the listener with his ear against the wall wanting more.