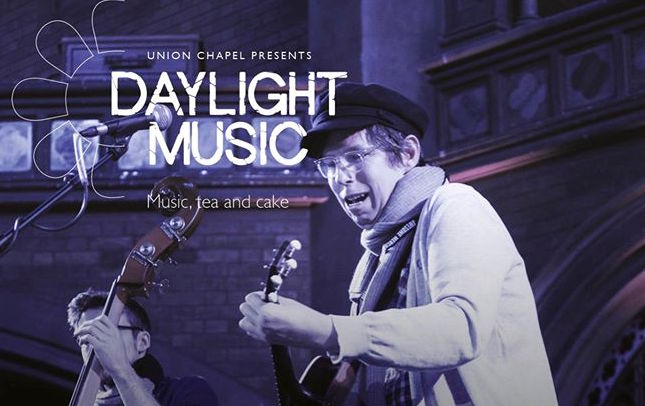 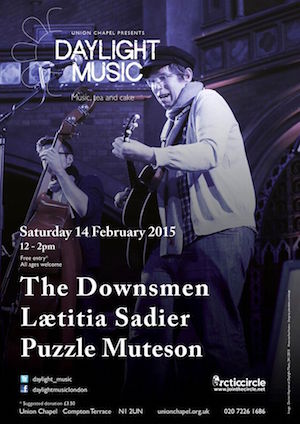 Keith Goldhanger opted for “a lazy afternoon with music, tea and cake” on Valentine’s day attracted, no doubt, by The North Surrey Barbershop Harmony Club.

According to a discarded diary that sits on the shelf labelled 1979 to 1983, exactly 32 years ago to the day this writer attended a Tiswas Road show in Bishops Stortford on the evening of Valentine’s Day 1982.

She was a decent girl but she drew the line at getting soaked to the skin thanks to a stray bucket of water and a teenage boyfriend ogling unacceptably at a certain Sally James and a dog called Spit.

Fast forward to the present and this sad lonely single man finds himself sitting in a chapel pew, surrounded by coffee swigging punters in big jumpers swooning at the music filling Islington’s Union Chapel courtesy of a man who goes by the name of PUZZLE MUTESON.

These Daylight Music Events (This is Number 184) are a pleasure to attend on Saturday mornings if you happen to be in North London with a couple of hours to spare. The eye catching name of Stereolab’s LAETITIA SADIER on the bill has caused the early morning tube journey.

OK, so it’s officially afternoon now but this is my breakfast time and my stomach is telling me so. A big slice of chocolate cake washed down with a healthy mug of coffee I’m sure you’ll agree is always an ace beginning to any weekend but this isn’t the reason for being here. These Daylight Music Events happen in batches of about ten and are very well attended. Anyone who has visited the Union Chapel over the years will testify that the acoustics for certain acts cannot be bettered and the organisers of these events seem to have this in mind when cutating these shows. The hundreds in attendance sit in silence as Puzzle Muteson goes through his acoustic self-written tunes and then he leaves us with a glorious New Order cover version (True Faith). We feel like we’re watching a one man Dry the River and immediately we are patting ourselves on the back for getting up early.

In between acts we’re entertained, not only by those punters appearing to see how many mugs of coffee and slices of cake they can walk though a church carrying without having an accident but announcements regarding more quiche dishes being urgently required and reminders that donations are cheerfully accepted in order to maintain the running of these Saturday events. Children tip-toe around, adults are busy quietly chatting and queuing for more coffee, volunteers are gathering empty mugs and at the back of the stage a figure (Hannah Lawrence) sits at the Church organ pumping out Madness and Abba Cover versions that get a round of applause in between numbers.

Laetitia Sadier is perfect for a Saturday morning gig like this. Armed with electric guitar and possibly the odd effects pedal she goes through a few tunes from her solo album, Something Shines, and reminds us that it’s Valentine’s Day and that many of her tunes are love songs regardless of the date on our calendars. It’s not all lovey dovey though “Do the rich want the poor to be rich?” she asks during Oscuridad, a question that basically sums up the world we’re living in today. Butterside Up, a favourite from the album is also included and after half an hour we find we are reminiscing about the years gone by since we saw her bouncing around singing French Disko and pressing keys on a Moog with the occasional tambourine in hand. It’s great to have her back and hearing her voice again.

The morning…(well afternoon I suppose now there’s no more cake left and its all about to kick off in the lower leagues of Association Football) ends with a fourteen piece barbershop choir called THE DOWNSMEN. Dressed in bright green waistcoats and stripy green and white shirts they delight us with tunes from musicals we all know and love.

Encouraging us to all clap along is a bit too much for some of us still grasping hold of the last cake crumb but it’s still more civilised and drier than singing along to a song about a bucket of water whilst wearing a Discharge T-shirt as some of us were all those years ago back in Hertfordshire.

You can find The Downsmen on Facebook, as you can Laetitia Sadier and Puzzle Muteson.