Home Music Dayal Patterson’s book on black metal is the definite guide to the... 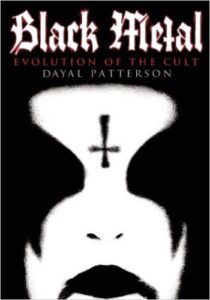 Black Metal comes with a strange and dark history.

It also features some of the most groundbreaking music of the last couple decades. An arcane and complex world, it lends itself perfectly to a comprehensive guide that so few people are capable of doing.

Dayal Patterson has saved them the effort with this book – a perfect journey though a complex form.

You can order the book from here.

1. When you finished the book what did you feel about the state of black metal?
“It wasn’t something I had to think about much to be honest. Because this whole project is being tackled (more or less) chronologically I’ve spent a lot of time examining what might be described as the ‘glory years’ of black metal – ie. its most formative/influential periods (predominantly in the nineties and, to a lesser extent, the eighties and early noughties). But having said that it’s not as if I – or black metal itself – is just backward-looking; indeed, one could say that the black metal scene has never been healthier in many regards. There are more listeners and more people involved than ever before, more recognition of the genre as a whole and a greater appreciation of earlier bands and works that were overlooked at the time. There are also a lot of great new acts appearing and even if one has to perhaps delve a bit deeper due to sheer number of new releases, that seems like a small price to pay.”

2. Why the continuing interest in black metal?
“Put simply, I think there is still a lot to say. The black metal scene is so huge and so varied that you could never really tell its story with a single book – even one as large as Black Metal: Evolution of the Cult. That book was essentially about creating a timeline and exploring the birth and early development of the the genre, whereas this book – and the ones that follow it in the series – are about expanding the understanding of the whole thing and building up a bigger, more complete picture by looking at the different scenes and subgenres that have grown up in different parts of the world. Fundamentally, there were (and are) still a lot of important bands that deserved to be covered.

3. Was it a hard book to write? lots of detail and lots of micro scenes worldwide
“This book was actually much easier to write than the first. For a start, people had a point of reference for what I was putting together, so it was much easier to get bands on board. When I wrote the first book there were only a few black metal books around and most were regarded rather poorly, so I had to spend a lot of time explaining how my work would differ and what I was looking to achieve. This new book actually includes several bands who have either never given an interview before or very rarely – Silencer and Strid being two examples – so there still had to be a certain amount of discussion taking place before the writing stage but things definitely moved much more smoothly this time overall. Another big factor was the fact that I was releasing this book through my own publishing house (www.CultNeverDies.com) and that meant II could decide on deadlines and had complete creative control with regards to content, design, layout and so on.”

4. How diverse is the black metal scene now? Lots of different styles have emerged…
“I think the black metal scene has become a very diverse and varied place stylistically (perhaps culturally too) and with every year that passes a new face of the genre seems to arise, with black metal drawing on elements of death metal, folk, industrial, post-rock, doom metal, death rock/gothic rock, prog and whatever else. And although it has definitely expanded as the years have gone on, it has to be said that there was always a considerable amount of individualism within black metal – even if you look at the early nineties scene, bands didn’t sound particularly like one another; take Mayhem, Darkthrone, Ulver, Rotting Christ, Necromantia, Samael, Blasphemy, Burzum, Master’s Hammer, VON, Mysticum, Satyricon, Emperor, Dissection, Marduk…. all of those bands were considered black metal by a considerable number of people but all had very different sounds. I think there came a point where things streamlined and by the end of the nineties ‘black metal’ meant this very narrow Darkthrone/Burzum template – unfortunately there are a lot of people who kind of got duped into thinking that only this sort of approach is ‘real’ black metal, which is a bit like bands thinking that ‘real’ punk rock has to sound like the Sex Pistols or something.”