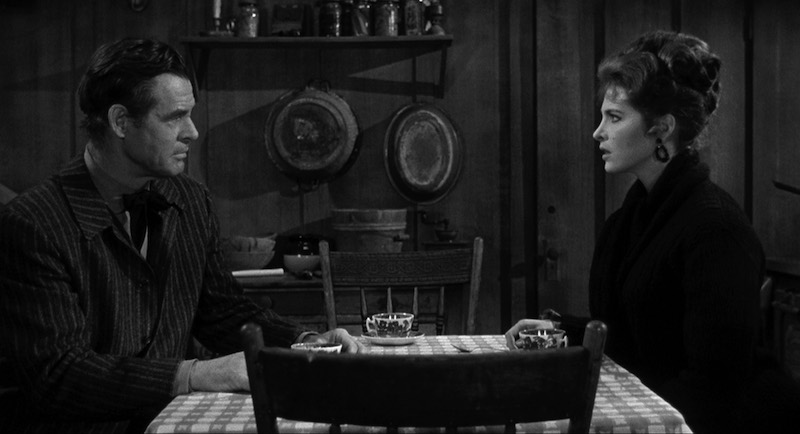 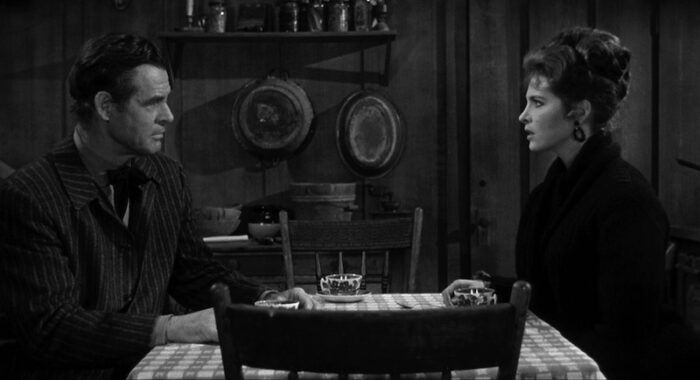 Day Of The Outlaw, one of the greatest and most original American westerns ever made, receives its first Dual Format DVD / Blu-ray release from Eureka! on 7th December 2015. For Louder Than War, Ian Johnston reviews an undisputed masterpiece.

Made in 1959 on a small scale budget by the renowned Hungarian / American director Andre De Toth (who also directed the classic 1948 Dick Powell / Lizabeth Scott noir Pitfall and the brilliant 1954 Sterling Hayden picture Crime Wave), in the snowy wastes of Mount Bachelor, Oregon (odds on that Day Of The Outlaw is a key inspiration for Tarantino’s forthcoming snow bound The Hateful Eight), Day Of The Outlaw is a gripping noir western that never fails to surprise and engage.

Based upon the novel of the same name by Lee Wells, Day Of The Outlaw is an unusually bleak and violent western for the period, which studiously avoids the numerous conventions of the genre. The picture would leave an indelible impression upon the filmmakers of the emerging French New Wave and other western directors, such as Sergio Corbucci, Sergio Leone and Sam Peckinpah. Day Of The Outlaw also features the magnificent black and white cinematography by Russell Harlan and one of the best performances by the superlative film noir actor, Robert Ryan.

The picture opens with an angry Blaise Starrett (Robert Ryan) riding into the snow blasted Wyoming town of Bitters with his head ranch foreman Dan (Nehemiah Persoff). Starrett is enraged because farmer Hal Crane (Alan Marshal) plans to erect barbed-wire fencing around land through which he drives his cattle for sale. “I’m through with being reasonable,” snarls Starrett. Dan replies, “A wire fence is a poor excuse to make a widow out of Crane’s wife.”

So it is quickly revealed in the following scene, in the local hardware store, that Starrett enjoyed a love affair with the beautiful young wife Helen Crane (Tina Louise, a former model and nightclub singer, who would eventually star in the long running US TV show Gilligan’s Island) before her marriage of convenience to Hal, the man whom it is highly probable that Starrett will imminently gun-down. Helen pleads for mercy, to which Starrett retorts, “You won’t find much mercy anywhere in Wyoming.” Starrett claims that he and Dan have made Bitters a safe town in which to live and work, chasing off “every thief and killer in the territory.” Having given a final warning to Hal Crane and his men (“Mr. Crane, you said you’d fight to keep what you want. Well, I’ve been doing that for twenty years and I intend to keep doing it, and no pig-belly farmer is going to stop me!”), the stage is set for a shootout to the death between Starrett and Hal Crane. 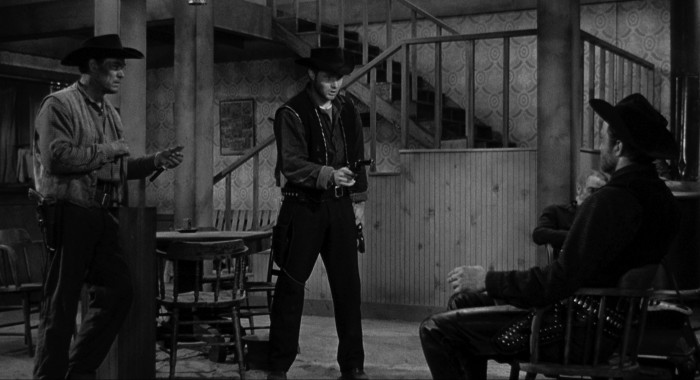 At this near fatal juncture, Bitters is suddenly invaded by former US Calvary captain Jack Bruhn (character actor and singer Burl Ives) and his murderous band of outlaws. Bruhn has total control over his motley and near psychotic wild bunch, but he is seriously wounded. If Bruhn dies in Bitters it is heavily implied that the women will be raped, the town burnt to the ground and the entire population killed. As the Bitters veterinarian struggles to save Bruhn’s life, Starrett starts a painful process of self-examination and re-evaluation after a long look in the mirror, while considering what his next course of action might be.

Ryan’s Blaise Starrett, as should be clear from this brief synopsis, is certainly not a regular, one-dimensional Hollywood ‘wild west hero’. Ryan carefully delineates the deeply conflicted Starrett’s troubled personality, what might have shaped it and how he summons the strength of will, against overwhelming odds, to try and redeem his troubled soul and save the day. Ultimately, Starrett is as forbidding and unknowable as the frozen, harsh landscape that comprises the mountainous terrain in which Bitters is perched. Starrett will use his unforgiving surroundings to wage war against his foes, rather than using his gun, in what appears to be a near suicidal undertaking. Cast against type, Burl Ives’ Bruhn is not stereotypical either. Bruhn might be ruthlessly pragmatic and a stone cold killer, but he is also a man of honour. He matches wits with the tough Starrett for much of the running time of Day Of The Outlaw, but a past massacre committed by his men weighs heavily upon Bruhn’s conscious and he too wants to make amends.

Unusually for a western, the female characters in the drama are very much to the fore and well written. The underrated Tina Louise gives a very committed and considered performance as the conflicted wife, who probably still loves Starrett but realises that times have changed. Venitia Stevenson, as the teenage general store owner’s daughter Ernine, plays well with the youngest member of Bruhn’s bandits, played by David Nelson, rock ‘n’ roll star Ricky’s older brother. Ernine’s subtle attempts to steer Nelson’s character Gene towards a normal existence are utterly convincing.

De Toth maintains a steely tense atmosphere throughout, often creating a tension in scenes that seem ready to explode into physical violence at any moment. This is emphasised by De Toth’s nominal filmic style, Harlan’s foreboding black and white photography and Alexander Courage’s memorable, taut score. If any further evidence were required that Day of The Outlaw was more a film noir than a western, the remarkable, fated character actor Elisha Cook Jr, who was featured in such notable noir pictures as John Huston’s The Maltese Falcon, Born to Kill, The Gangster and Stanley Kubrick’s The Killing, appears in a small role.

This classic western has never looked better in this Masters of Cinema edition. Coupled with a revealing video appreciation by French filmmaker and friend of De Toth, Bertrand Tavernier, a 32-page booklet featuring an essay by critic Glenn Kenny, reproductions of the movie’s original press book and a 1994 interview with De Toth (who died in 2002, aged 89), Day Of The Outlaw is a compulsory purchase for any staunch cineaste.