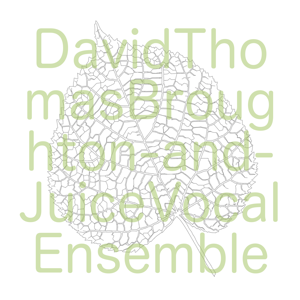 Edinburgh’s Song, Toad Records latest release, is a collaborative effort from singer/songwriter David Thomas Broughton and Juice Vocal Ensemble. Having met at SXSW in 2011, both parties kept in contact, resolving to work together and some two years later the album came together over the course of only a few hours. The result is a collection of songs, with the imperfections such a tight recording schedule has naturally thrown up. This is in no way a bad thing though.
The opening track In Service starts with a nice, simple acoustic guitar. The squeak of the hand down the neck of the guitar is very prominent, which I confess I quite like to hear, while Juice Vocal Ensemble’s contribution is excellent.

While unconventional at times, they really do bring a lot to the table which Broughton’s vocals are rich and resonant. There’s a haunting feel to the track at times and lyrically it gets quite dark, in counterpoint to the music and vocals. Throughout the album certain aspects do crop up regularly, from Broughton’s often untidy guitar playing, to the unorthodox vocal styling of Juice Vocal Ensemble. The latter can be noted on second track The Assurance with whistling, a vocal line that sounded like a buzzing bee. Taken alone that may sound a bit strange but in the context of the song, alongside the great guitar and vocal from Broughton it just works really well.

On tracks like A Man To Call My Own the two sets of vocals act as counterpoint to each other when both are a little more conventional in their delivery and again, sound fantastic. Musically, the song slowly builds from a low key opening but for me the vocals steal the show. Elsewhere the backing or accompanying vocals are beatbox, hissing, purring of puffing. Every and any trick is employed to stunning effect. Been A While is a completely vocal track and make me think of another Song, by Toad Records artist, Adam Stafford who looped vocals, building layer upon layer with some acting as percussion to the main vocal and guitar parts. While not the same genre the techniques and tricks employed certainly brought this to mind.

The backing vocals then feel almost choral on The Promise, while Broughton’s vocals are rich and convey a breadth of experience and authority. Again, this called to mind other Song, by Toad Records artists like Ian Humberstone and Rob St. John, as well as someone like Bill Callahan. It’s a voice that speaks of a life full of experiences and the need to share them with us the listener. On a track like this, it makes me a little worried for the singer/songwriter when he delivers a line like –

every one of you pricks

It may not be the promise I intended”

as I genuinely feel like this may have happened, such is the weight given to the words by Broughton’s fabulous voice.

Where the darkness creeps in, there’s also light like the short and hopeful sounding Woodwork, while Yorkshire Fog also feels a touch lighter. There’s a good change of tempo on this track also, with the song starting slowly before picking up pace to the sound of backing vocals mimicking a train, before it eventually reverts to the slower pace. Oh, Nurse Of Mine darkens the mood thematically. There’s a low key and sparse guitar sitting underneath the vocals and as the track progresses the guitar warms up, adding some texture. There’s even handclaps thrown in for good measure, which never fails to make me happy.

Unshaven Boozer sounds as though it’s actually recorded in a bar, with lots of background chatter going on throughout. The lead vocal is really strong, while underneath is some half heard spoken word. As elsewhere, I really like the way Broughton has incorporated Juice Vocal Ensemble into the songs. At no point does is sound repetitive, always feeling fresh, innovative and interesting and perhaps most importantly it genuinely enhances the album and the individual songs.

Sliding The Same Way closes out the album with a sombre, beautiful guitar initially. There’s also a welcome hint of tape hiss. There are really no more superlatives I can add about the vocals on this album. While I’ve perhaps mentioned the unorthodox nature of the vocals, it bears mentioning that when the vocals are a little more conventional and working in harmony they are equally brilliant and compliment each other beautifully. This is definitely an unconventional record at times, but no less engaging and interesting for it. I was drawn in by Broughton’s voice initially, then dazzled by the Juice Vocal Ensemble frequently.

Strangely I almost forgot about the guitar at times, but this is not to suggest it was in any way defective. Rather it’s intended to highlight how good the vocals are on every track. It won’t be for everyone, probably being filed under lo-fi or something around that reference point but it’s never dull and lyrically it can be surprisingly dark. It’s definitely worth investigating and for me it’s another winner from the ever impressive Song, by Toad Records.