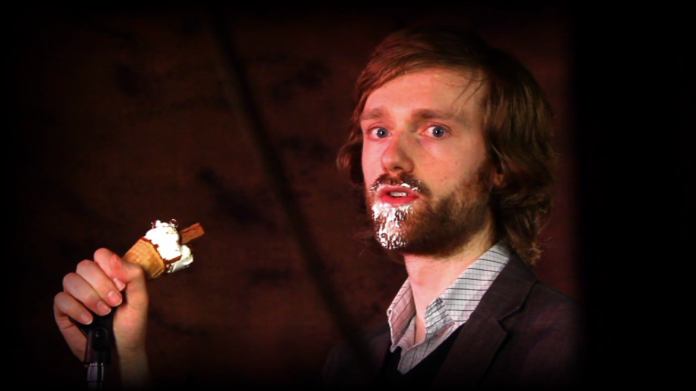 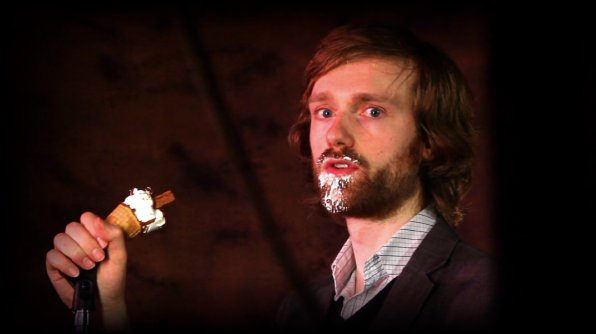 David Thomas Broughton brings his uniquely eccentric talents to Edinburgh; despite the distraction of a hen party, his incredible voice wins out.

It’s been a while since I’ve been to the Electric Circus in Edinburgh. Tonight sees David Thomas Broughton roll into town, sadly sans the Juice Vocal Ensemble with whom he collaborated on his soon to be released album, which we reviewed a few weeks ago. It’s an odd venue. Part cabaret bar, part karaoke venue and part live music venue, there’s around thirty people in tonight seated at tables in front of the stage. The usual wall of video monitors are covered with a black backdrop bearing the name of the venue.

I arrive midway through the support act. I don’t catch his name and can’t see it anywhere but in the nicest way possible he was pretty forgettable. At first I thought it was a couple of punters indulging in some karaoke but to my dawning horror I realised it was the support. Anyway, that aside it’s not long until David Thomas Broughton takes to the stage with little fanfare. His voice sounds wonderful in the small venue and he dives straight into his set with some nice guitar playing. Even when he makes a bit of a clanger, he just pauses, shrugs and gets back on with it.

There’s no distinct break between songs, something that continues for the entire set, with music continuing while Broughton tunes up for the next song. It seems an almost slapdash approach to the live set but he gets away with it and it somehow adds to the charm of it all. I’m distracted from the music momentarily by a hen party emerging from the karaoke wing of the building, garish sashes included, before turning my attention back to the stage to see Broughton put a cap on his guitar while playing. Naturally the guitar doesn’t take too kindly to this intrusion but again he gets away with it.

Musically, it’s very good. His distinct voice sounds excellent and is so powerful he really doesn’t need the microphone and indeed shuns its use at times, standing several feet away from it and belting out the words. The first of several bottles of water gets downed also, before being unceremoniously dumped. Bottle number three gets chucked onto a table of gig goers, which was quite amusing, I must admit.

There are many eccentricities displayed tonight. I’d never before seen a singer stand mid-song and pull out a notebook before writing furiously in it then showing it to someone in the audience. There’s what may have been a rape alarm used in one song, which had until that point been fairly beautiful and low key, yet not diminished in any way by said alarm. There’s even the sight of him leaving the stage and sitting at a table while a song plays.

Broughton is joined by a couple of gentlemen a few songs into his set. One on synth and vocals and the other on guitar and the three make some pretty impressive soundscapes. Broughton employs the use of looped vocals and guitar to add layers to his “live” voice and it works really well. There are a few other instruments employed that I can’t say I’ve seen before from a micro-cassette recorder to his t-shirt, when the microphone gets rubbed across it to create an screeching sound. Bizarrely, it worked really well in the song it was used for.

We’re even treated to the sight of Broughton picking up some of the discarded water bottle lids (I counted four bottles downed over the course of his set) and placing them in his eyes and mouth before stumbling around the stage comically like a blind man, feeling for his guitar. It’s definitely a gig of many firsts but the reason we’re all here is for the music and there’s no doubt that David Thomas Broughton is a very talented individual.  On occasion the songs were minimalist, before diverging into an electronic wall of sound. There was definitely diversity in his set, even though there was never a break and his voice really commanded the room until the last song ended when there was suddenly silence.

Broughton looked into the crowd with a wry smile on his face and it was over.

All words by Steve Mcgillvray, find his Louder Than War archive here.