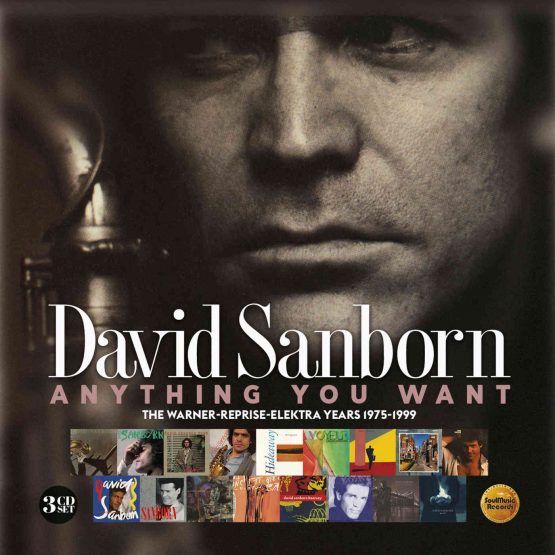 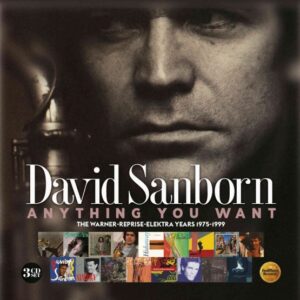 Now it is true that alto saxophonist David Sanborn is no Charlie Parker, or John Coltrane, but he’s also a restless and talented player with a surprisingly biting tone at times, who on this evidence is quite happy to move across genres to challenge himself and his audiences.

Sanborn is a household name across the pond with 8 gold records, a platinum album and 8 Grammys, but perhaps less well known over here outside jazz circles. But if you’ve listened to hits by Bowie, Sir Elton, Chaka, and Stevie Wonder you will have heard his distinctive and soulful runs.

To mark Sanborn’s 75th birthday, A. Scott Galloway has worked with SoulMusic.com founder David Nathan to curate 45 songs, including radio edits, rare mixes, overlooked album tracks and live versions from the 17 solo albums he recorded during this 25 year period.

To make this mammoth task easier they have broken this tastefully produced box set into three areas focusing on specific aspects of Sanborn’s output.

New York Dave & The Cali Crossover Express is disc one looking at his earlier more experimental work,  including the iconic Flight as Sanborn takes on both strings and percussion. There’s the single edit of the dreamily romantic, The Dream, which has been many loving couple’s wedding song.

His plaintive, sharp playing on Carly’s Song is full of pain, and he recruits the estimable Oleta Adams for a slowed down take on Bond theme, Nobody Does It Better, and his playing in the middle eight is amongst this best work, There is an atypical and unexpectedly good version of the traditional The Water is Wide, featuring an on form Linda Ronstadt.

Disc 2 is Sanborn: Soul man as he gets funky from the jazz funk of Believer to Hearsay’s house party vibe as Sanborn’s sax weaves in and out of the chaos.

Bang Bang is a glorious slice of Cuban tinged funk as Sanborn becomes part of a team of crack local musicians.  Completists will enjoy a hip hop mix of Marvin Gaye’s Got to Give it Up, which actually works, and a live version of Al Green’s Love and Happiness, featuring Luther Vandross on background vocals.

The final disc is Evening Ember Essence full of blues, where he made his name as a teenage sideman, and quiet storm, which is probably the oeuvre most familiar to UK audiences. Sade’s Pearl could have been written for him to cover as Sanborn plays some stately sax in this instrumental version, and only an American saxophonist could bring something new to the old standard Come Rain or Shine, which featured on the Forget Paris soundtrack.

Perhaps the oddest choice on here is Sanborn covering the Velvet Underground’s Jesus, which should be an abomination, but actually the yearning leading sax adds something quite poignant.

David Sanborn is still out there playing live looking for new challenges when most of us would be putting our feet up. This collection full of genuine surprises, and some brave career turns, is the perfect introduction to a smart and generous saxophonist at his peak.