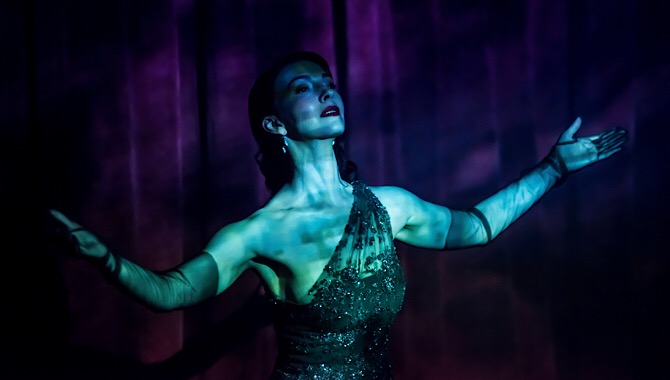 Lee Ashworth heads to the first musical instalment of Chrysta Bell Presents as part of David Lynch at HOME with MIF19 on a night when “anything can happen”.

There is somewhere we have to go. Right now…

It is sunny (the way I like to remember it).  The car door shuts on the working week and moments later we are inside train number one, then train number two, squeezing on and off, Piccadilly, Oxford Road, slicing through the city’s strata, descending the station approach past the old Cornerhouse where wide-eyed, agog, I first saw Mulholland Drive (2001) almost twenty years ago, through the reflective sheen of Jack Rosenthal Street to Manchester’s HOME.

There is somewhere we have to go…

Buffalo cauliflower wings, hot sauce and beer. Friends arrive and order food. It’s hot. The call to take our seats is distorted, muffled by the sounds of the restaurant. My voice comes out of my mouth and the words appear to come from me:

…. there is somewhere we have to go. Right now!

Downstairs in the circle of the theatre, darkness descends. Suddenly the world has shrunk to this, this here and now, this stage and curtains. A low, rumbling sonic texture sculpts the air with Dean Hurley’s DNA in every vibration. The curtains are red, more than just red or perhaps red in its purest, ideal form. Lynchian red. Red Room red. The red of Mulholland Drive’s Club Silencio. The hairs on my neck are standing tall. 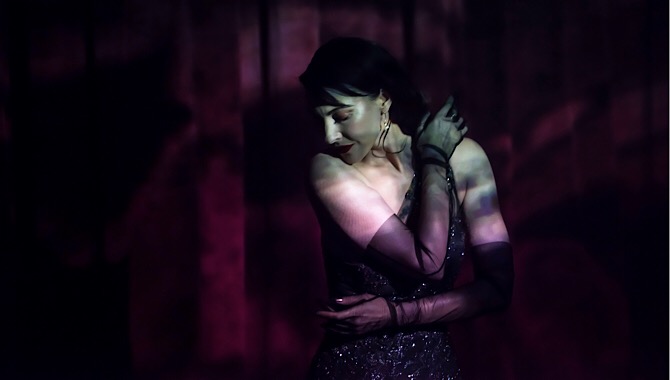 Chrysta Bell glides across the stage and extends her arms, stretching and turning, gesturing forever beyond her words, every twisting pose an expression of that electric something in this supercharged atmosphere, silver sequins and burning hair. Her voice is emotion barely contained, a wild undercurrent beneath the pristine surface. On nights like tonight, whispers Chrysta, anything can happen.  On nights like tonight, she quotes David Lynch, we are supported by nature. Indeed tonight and for the rest of Chrysta Bell Presents’ three night tenure at HOME, she is his emissary.  She strikes a mysterious pose, the configuration of her arms up and off to the side, like the limbs of a Japanese tree suspended upon the canvas of this floating world, suggestive of something more, something just out of reach yet so close you can feel it.

The red curtain opens to reveal the red lipstuck lips and redder jacket of Douglas Dare. With a shock of bright blonde hair and pale complexion, a ghost stalks the stage searching perhaps for the spirits of the great Romantic poets.  Who knows how long he has stood here, motionless, singing his broken ballad unaccompanied by instrumentation? The stage expanding around him, it seems that Douglas Dare has always been here, is always here in this moment into which we too have stumbled.  His silhouette is delicate yet irrefutable, and tracked by the expert lighting, his presence grows.   Suddenly he is upon the piano, the instrument hunching over the stage like a black beetle, a solitary wing unhinged from its case.  Throwing back his luminescent head in the spotlight, arms outstretched beyond the cuffs of his brilliant white shirt, Dare’s leather trousers disappear into the darkness and his fingers are alive upon the keys.  Such is his intensity that at the end of each song I expect him to slump to the stage, spent with transcendence as whatever it is that possesses him roars into the night, for he is channeling some force. The next moment he is cradling an autoharp and he is beyond those red curtains. He has crossed to the other side, taking all of us through the darkness with him. 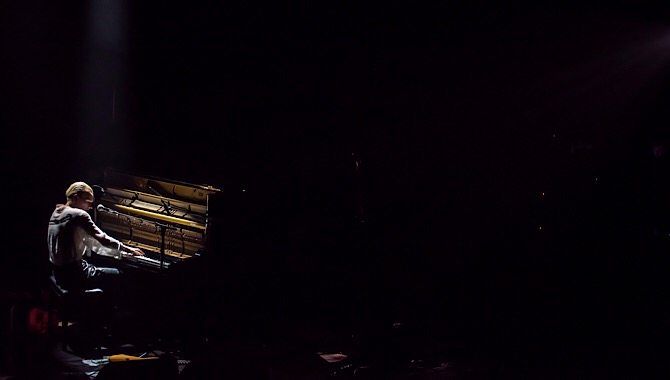 Chrysta Bell returns, prowling the stage bathed in bruising degrees of light. “No Hay Banda!” (there is no band) is the repeated refrain from Club Silencio, and tonight all artist ensembles are stripped right back with percussion provided by backing track. Guitarist Jon Sanchez and bassist Chris Smart stand stock still several steps behind her, silhouetted ominously throughout the short set.  It is through the extended heavily-riffed swagger, several numbers in, that everything in Chrysta Bell’s performance crystallises tonight. The mood intensifies, the rhythm chugs like thick, black oil and the guitar lines are picked over again and again, the slick, sparkling sheen on top.  Chrysta Bell steps forward, imploring the audience, her voice transforming at the heart of it all.

The emotion and the intensity spills out into the corridor and the packed bar beyond.  I try to breathe. I try to speak.  Again, words leave my mouth but I cannot be sure of their providence. It seems impossible that the theatre is just beyond the concrete finish of the gargantuan internal wall… the theatre, the nightclub, the curtains, the music… did this really happen, for everyone? Were you there? Did you see?

Anna Calvi strides out from the wings and within moments of the first song truly beginning we are back in Club Silencio and we are deep, deep into the night. With just an electric guitar, Anna Calvi plays songs taken mostly from her most recent album Hunter. Immersed waist hivy in a torrent of dry ice at one point, Calvi’s performance somehow transcends even that of Chrysta Bell’s to present the perfect balance between charismatic and mysterious detachment and the uncompromising intensity of the real.  In doing so, she comes closer than perhaps any other artist in articulating the Lynchian aesthetic. On Swimming Pool we descend with the repeating scales amidst the dappled lights, seduced beneath the placid surface only to be spat out with the concentrated rage of Don’t Beat The Girl Out Of My Boy and strung out ecstatic with the show stopper Indies Or Paradise. 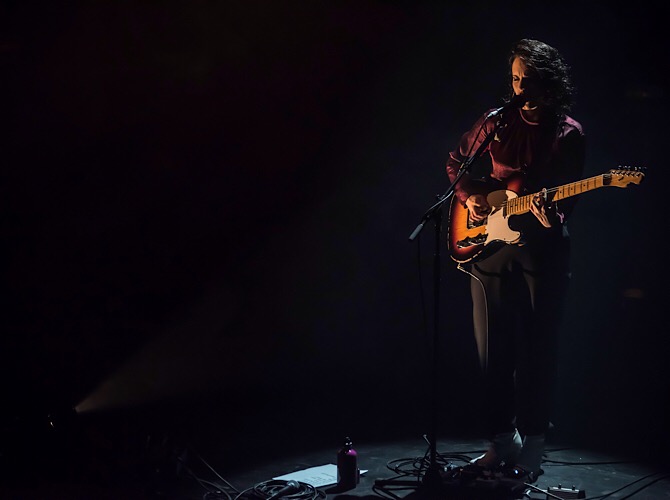 Although I anticipated a singular event on this opener for the musical offering of David Lynch at HOME, huge credit must go to producer Katie Popperwell and curator Mary Anne Hobbs for conspiring to create a Lynchian experience so faithful to an aesthetic vision that is characteristically hard to define yet unmistakeable when seen.  In terms of ambition, themes and experimentalism, Lynch’s legacy is abundant in contemporary culture, but there are few impersonators because to ape his style and fall just short of the mark is to miss the target by some considerable way and collapse into parody or pastiche. With Chrysta Bell, the team at HOME created an authentic Lynchian experience that was totally immersive. Reader: I’m still there.