Above and all other photos on this page © Simon Lee.

Most people on a Saturday evening will have been waiting anxiously all week with eyes firmly on their television for a panel of puppeteers to deliver them the ‘perfect’ musical package. I use the term ‘perfect’ very loosely, I’d rather find my music in live music venues that are accessible and personal and come to my own conclusion of what’s a perfect musical package. It’s Saturday and I hate manufactured music and this evening I’ve a ticket for a gig at Gorilla in Manchester and I’m about to discover a big secret.

Up until Thursday night I had no idea who David Ford from Eastbourne was, let alone what his music was like, but a gig is a gig and a friend had a spare ticket and told me to check out some of his music online. I listened to ‘Go to Hell’ and ‘Song For The Road’, enjoyed both and left it there.

Performing live is the true body of an artist and I decided to wait till Saturday to hear the rest. 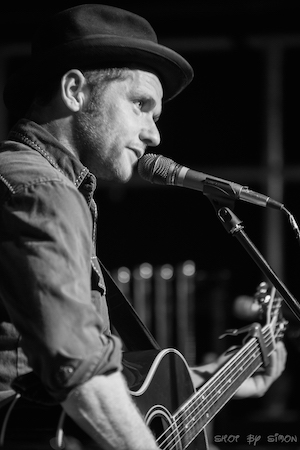 Apparently David Ford gigs are solo affairs with him playing all manner of ‘instruments’ built up during each song with a clever record / loop back system which I’m told is compelling to watch, he even used an old typewriter’s sounds on occasion … however, tonight was altogether different, with a string quartet and a drummer in tow and the songs were to have new arrangements.

I arrived just in time to find a stage set out like a parlour with rugs, wooden chairs and music stands and a backdrop of dials and switches, which I’m informed are from the now demolished Oxford Road BBC Studios in Manchester. The venue is packed with a variety of people of all ages, and even include someone dressed as a panda, all excitedly awaiting what most are familiar with and I have little idea of.

Arriving on stage accompanied by the string quartet, drummer and vocalist / percussionist, David seats himself at the piano and opens the evening with the new and beautifully arranged ‘Hurricane’. I write now with the hindsight of knowing the name of this song and as someone new to David Ford and my ears are truly opened. The gentle introduction of the strings, followed by piano, pull me like a marionette into this new sound. His vocals and lyrics capture and hold me for what seems a time too short and a blur. It’s a fantastic ride and several songs in ‘Song for the Road’ makes its emotional appearance, being about giving up ‘life’ and choosing a life on the road. From where I was stood it seemed one of the players dabbed away a tear at the end.

Throughout the gig I cast my gaze around the venue and the audience’s eyes are fixed on David’s every move, with many singing along, word for word, and it’s at this moment I’m thinking how something so beautiful has gone under everybody’s radar except for a few. ‘Let it Burn’ is up next and Ford’s fierce delivery is having quite an effect on the crowd who are stamping their feet and singing along, he is taking the evening by the scruff of the neck, just in case some haven’t already succumbed to this beautiful sound and before you can draw breath he delivers ‘To Hell with the World’. I am ignorant to the chronological order of his music, but each song seems to follow seamlessly and appears as fresh now as at the time at which they were conceived.

A real treat for me is to follow in Ford’s set and that is a cover of Al Wilson’s ‘The Snake’, an old Northern Soul track interpreted in David’s own evocative style and with the string arrangement it’s something beautiful to behold. ‘State of the Union’, next, is a fantastic song that had me fixed and in a trance, but what was to follow was equally beautiful. ‘O’Sullivans Jukebox’, a song from Fords hometown and youth where he sings of the only Irish bar in Eastbourne where he dwelled and sunk money into the jukebox and his ‘hedge fund’ behind the bar. David tells us how the bar eventually closing down, reminding me of my own favourite bar, The Steam Brewery in Manchester, now sadly gone as is its Jukebox. It’s the song of a man who could have been anything, of a man who lived out his years in the bar and what might have been. He gets a roar of laughter as he proclaims to have been “pretty decent as a footballer, could have been the rock of United’s back four … they could do with one”. 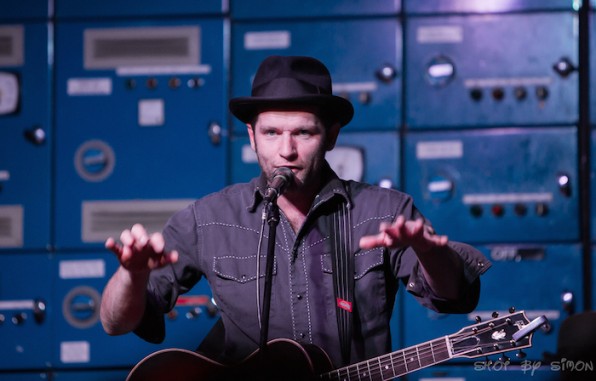 Throughout the night the relationship between artist and audience is unlike one I have witnessed before. There are calls of derision to those in the bar and anyone in the audience who carelessly speaks aloud while David and the band are playing as nobody wants to miss a note of music or a lyric. Between numbers and towards the end we are introduced to his band members and pockets of conversation between David and his audience and appreciation of each member is loudly applauded with shouts of “We love you!” And other proclamations of appreciation.

Like all good things they come to an end, but David reassures us that they will be back for an encore. Finishing the night with ‘Go To Hell’ and then ‘Every Time‘, one of the most animated performances I’ve witnessed and sang with such conviction, is the perfect song to end a perfect evening and the audience’s appreciation is clearly visible in a sea of smiles and admiration. The reluctance of people to leave, shows they want more, but there is no more. However, David signs memorabilia and converses with fans after the show before reluctantly being asked by security to move out into the bar area where he continues to talk and be photographed by fans. I quickly grab a photo opportunity before I leave and he is still in demand for photos while I make my way out on to the streets to spread the ‘Gospel’ of David Ford to anyone who will listen and those who won’t.

You can’t keep something this secret forever, and it seems David may finally be on the cusp of moving up a level or two, having recently been awarded Song of the Year Award in the ‘Les Victoires de la Musique’ ‘French Grammys’ for the song ‘20 Ans’, a big hit in France for bestselling French artist Johnny Hallyday. The wider world may now be starting to pay attention.

Here’s to a bright future!

David Ford’s website is here: davidfordmusic.com. He can also be found on Facebook and he tweets as @davidfordisdead