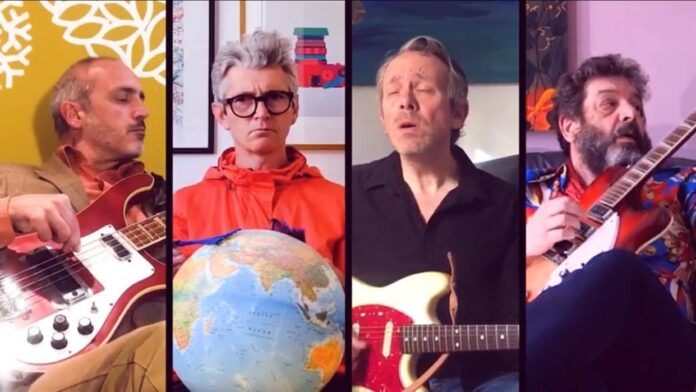 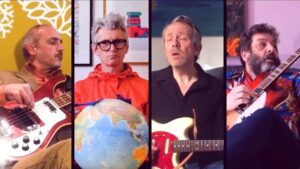 There is a double CD various artists compilation coming out in July on Cherry Red Records called Super Sonics – 40 Junkshop Britpop Greats  – (there was a previous collection of Junkshop Glam) It’s ‘a celebration of the multi-faceted British alt. rock/pop scene which flourished 1992-1998 attracting the term Brit Pop’.  Whist a few of the artists included really do deserve the term ‘Junkshop’, there are some indefinably brilliant bands who feature that don’t – in fact, it’s an insult -and I take offence on their behalf:  the fantastic Mantaray, the sublime Gretchen Hofner and fabulous David Devant & His Spirit Wife…to name but three.

And who should make another of their occasional reappearances? But the Vessel, The Colonel and co.  They’re back! With a beautiful double A side single…

The 90s cult heroes returned as a live force a couple of years back to meet fierce demand from a rabid fanbase, following a 15 year hiatus. After sold out gigs at a series of London venues including The 100 Club attended by fans from across the UK and Europe, they regrouped to record and release their fourth album Cut Out & Keep Me just before Christmas 2019. They’ve also shared a double A-side lockdown single via their website featuring an old live favourite – ‘Taking My Time’ – officially recorded for the first time.

The Brighton-based cult heroes have crafted two perfect laid back lockdown anthems for these strange days. ‘Taking My Time’, begins with sun kissed lazy day strumming and ends in a spectacular sunset of fried-at-the-edges psychedelia. It’s a song that actually dates back to some of the band’s earliest shows but has never been officially recorded until it became the obvious choice for some lockdown euphoria. “It’s an invitation to grasp our newly awakened temporal entanglement and celebrate time’s elasticity. The present is all lived experience,” says The Vessel, better known as band’s singer Mikey Georgeson.

It comes joined by the brand new Bowie-esque drama of ‘When Nature Calls’, written partly as grieving process but also as celebration “of the deeper meaning found through a cosmic entanglement with nature.”

And TONITE! For one night only, David Devant play live online in aid of the Save Our Venues campaign.  Mikey says:

For DD&HSW small venues were the precious life blood that allowed us to gather a collective of the dangerously devoted. As a teenager the local venues in our small town opened the door to a whole new realm of expressive wonder. I am still in awe of seeing the cardiacs perform an other worldly wedding seance at a small venue called champagnes. The rec rooms is a similar kind of venue where we can expect the unexpected and young musicians can shape the future.

As ever with the Devant band, it’s All Done With Kindness.