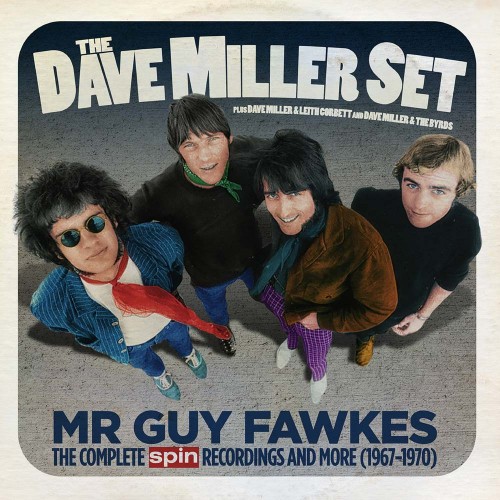 Subtitled “The Complete Spin Recordings And More (1967-1970)”, this collection brings together everything set to tape by NZ-born Dave Miller with his band the Set and also contains selections from his 1970 solo album “Reflections Of A Pioneer”………LTW’s Ian Canty checks out how they did it in the 60s down under……

Dave Miller, a talented singer and guitarist, first set out on a musical career in his Christchurch New Zealand hometown being backed by an aggregation called the Byrds. Acknowledging that there was actually a quite successful combo from the US with that name, he instead made for Sydney Australia with thoughts of launching a duo in the mould of Simon and Garfunkel. When this didn’t come to fruition Dave was asked to put together a house band for the city’s Bowl Disco nightclub. Though ultimately the disco would not require their services, the personnel assembled would become the first version of the Dave Miller Set (though over time the line-up fluctuated, with drummer Ray Mullholland staying the longest). They quickly built up a reputation as a hot live act and were signed up by the Spin Records imprint. Soon they nabbed a coveted spot on the Sydney date of the Easybeats’ national tour, which thrust them in the public eye.

They took the unusual but quite lucrative step of a gig on a P&O cruise ship, arriving back just around the time their Why Why Why (a Paul Revere And The Raiders cover) debut single was meeting with approval from the Beat obsessed sub-continent. Returning to the high seas during the Summer of 68/69, the group reached the peak of their success with fourth single Mr Guy Fawkes, a classic Psych mini-epic which was a massive hit in Australia (it eventually reached number two in the charts and was voted as “Single Of The Year” in the Aussie music press).

Unfortunately, a row between the record companies and radio stations there meant that a rushed “beat the ban” follow-up in Does Anybody Really Know What Time It Is? lacked the impact of its predecessor. As a result, dissatisfaction set in. The group split in early 1970 without ever having issued an album, unbelievable when you consider their popularity in their adopted homeland and the strength of their singles.

After this setback, Dave got together with bassist Leith Corbett to record his solo album Reflections Of A Pioneer (the cream of that LP has been included here on tracks 11-18). Though this record showed him still with plenty of interesting ideas, after its relative commercial failure he instead chose a career in music criticism. A bit of a loss to the music-making world, really, but in 1973 he decamped to the UK and made demos with members of Yes and Rory Gallagher which remain unreleased (Corbett also made the trip to Blighty at one point and ended up playing in Kubie And The Rats, the semi-Punk outfit of later A&M signee David Kubinec).

Listening to his efforts today I would say the great thing about Miller in both his band set-up with the Set and his solo guise was an unwillingness to stick to the tried and tested. He and his associates seemed to always be looking to find a new twist to things, a different path for their Pop instincts to travel down. Mr Guy Fawkes is a Psych classic, full of swerves and invention. Flipside Someone Is Sure To starts like your average orchestrated Psych/Freakbeat number, but beneath the strings the band are tough and some fiery guitar looks towards the future rather than back to the mid-60s.

Later b-side A Bread And Butter Day mines the same seam with, if anything, more explosive fretwork and even adds a touch of funkiness to the mix. For the first ever self-composed song Miller released it is quite a feat. Occasionally things didn’t come off with Hard Hard Year being a bit of a MOR plodding ballad, but more often than not things turned out better like the superior Folk Rock of Hope. Does Anybody Really Know What Time It Is? may have been a hasty single selection but there’s nothing wrong with the song or performance – it’s an uplifting bit of Soul Pop which showed there was more than one string to the Set’s bow. Previously unreleased track I Can Do It Better has rougher sound quality than the rest but shows the band in early stages had a good grasp at what made cracking Freakbeat.

On his solo album, Dave excels with the perfect pastoral Pop or In Your Mind and the LP’s title track Reflections Of A Pioneer makes the most of a glistening guitar line which verges on Who-like Power Pop. The progressive influence creeps in on Leith Corbett’s mood piece It’s Great To Get Up In The Morning But Better Staying In Bed with primeval but wordless massed vocals competing with a sonorous bass, but I’ll Be Laughing is probably the pivotal track – starting as a straightforward 70s Pop mode before wild guitar lines that spiral out of control take over and the song lurches all over the place, but pleasingly so and never being anything less than catchy.

What this new collection makes abundantly clear is what a talented individual Mr Miller was and also what a shame it was that he didn’t record more. His work with the Set played around with Beat, Psych and Harder Rock modes but always added something else to them and he continued to expand his musical vista on his solo album. Thus most of Mr Guy Fawkes The Complete Spin Recordings still sounds fresh and surprisingly contemporary. Though only recording for a relatively short time, Dave Miller and his Set brightened the 60s music scene in Oz greatly, always imbuing things with his own unique touch.