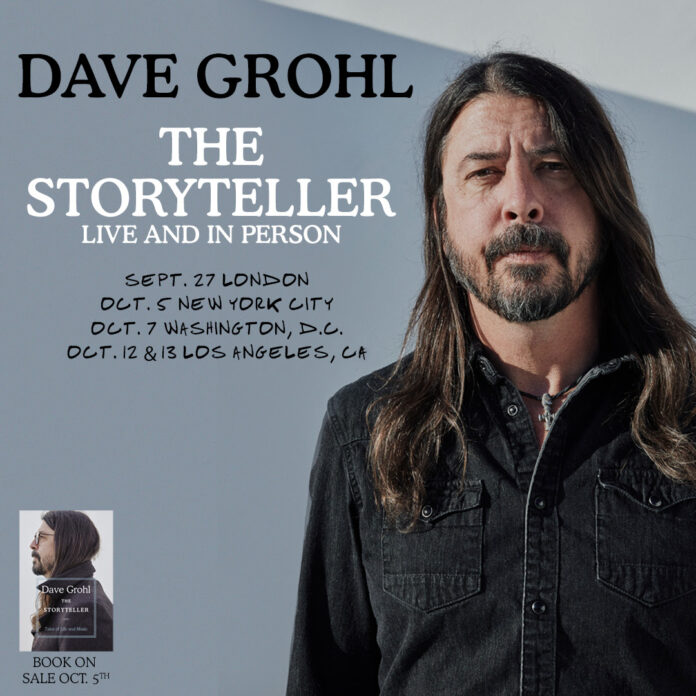 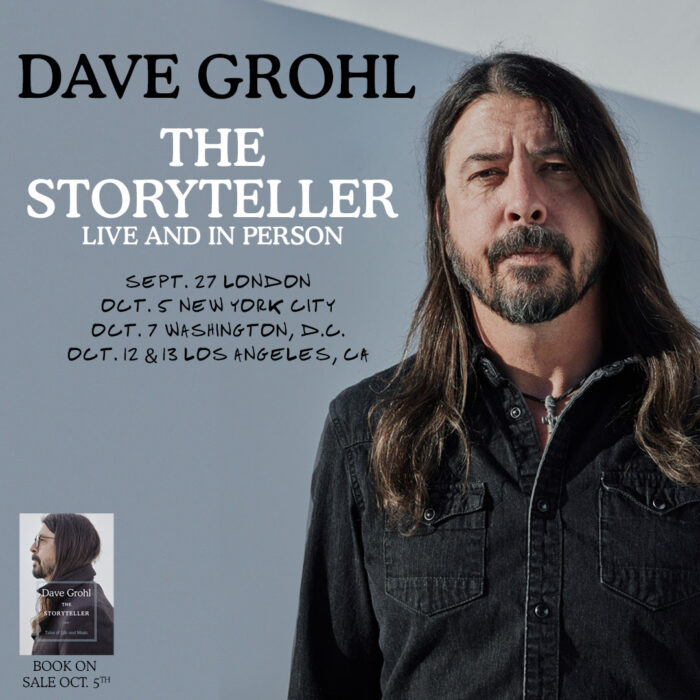 The Town Hall stage in New York City has experienced historical vibrations across the twentieth and twenty-first centuries. Suffragists founded the space to advocate for women’s rights. Margaret Sanger got arrested on that stage while championing birth control in the 1920s. Langston Hughes and Eleanor Roosevelt both lectured there. Billie Holiday, Duke Ellington, Nina Simone, Bob Dylan, and Elvis Costello have all performed on that same stage. For just one night, it’s set up a little differently. There’s a turntable, a beat-up electric guitar, and a pile of floor pillows stage right, a table with some cassette players in the center, and a drum kit stage left. Downstage, there’s an empty stool and microphone. For this single night, the stage becomes the set for DAVE GROHL — THE STORYTELLER — LIVE!

Yes, reader, Dave Grohl wrote a memoir. And over just five nights in four different cities, the book will come to life. It’s a rare thing to hear a rock god share stories about his personal life in an intimate, storied performance space in Midtown Manhattan. Given the intimate setting, I feel like it’s only natural that I’m now on a first-name basis with Dave Grohl. And did I mention there was music? Reader, there was music.

Dave grew up listening to the Beatles, and the show opened with a “bedroom” performance: Dave on his knees next to that turntable playing Eight Days a Week on an old electric guitar. “This is where it began,” Dave said, before describing himself as “a mischievous, hyperactive, fuckin’ nightmare.” Yet he “discovered harmony” singing along to Carly Simon with his mother, a musician herself, while driving in the car and soon became “obsessed with music.” Let me tell you, reader, that Dave and I have this Carly Simon listening business in common. I, too, used to sing along to Carly Simon while riding in the front passenger seat with my mom. But don’t let it tug at your heartstrings too much: years later she also disdainfully interrogated me, “what is this Nirvana music?” as I blasted Nevermind from my cassette player.

What if I told you there was live drumming to Smells Like Teen Spirit? I love the Foo Fighters, but I’ll always think of Dave Grohl as a drummer. Like most Nirvana fans of my generation, I’ve dreamt of time travel that will take me back to an early Seattle gig. Watching Dave drum to this song while Kurt Cobain’s voice filled the Town Hall was like a ghostly reverie.

But before that happened, the Storyteller recounted his discovery of punk thanks to his cousin Tracey: his “first real punk rocker.” As it turns out, Tracey was in the audience, sitting a few rows behind the stage. The lights went up for a few seconds while the audience screamed out, in unison with Dave, “TRA-CEY! TRA-CEY! TRA-CEY!” She was “like a superhero,” Dave said, describing the vital role she played in introducing him to bands like Germs, Dead Kennedys, and Black Flag. But most importantly, Tracey took Dave to see Naked Raygun at the Cubby Bear, a Chicago dive bar. “This was the first day of the rest of my life,” Dave declared. 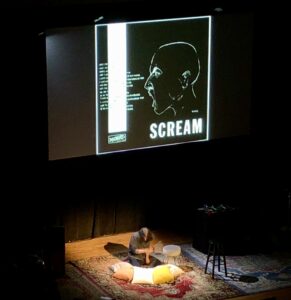 Through some twists of fate, Dave ended up joining the D.C. hardcore band Scream. In case you were wondering how he learned all the songs before successfully auditioning for the band, onstage at the Town Hall he showed us: Dave drummed along voraciously to the track Came Without a Warning on those “bedroom” floor pillows. He was only 17 when he joined Scream, and touring life wasn’t as glamorous as expected. Yet “it was the music that kept us alive,” Dave told the audience. On that tour during a stop in Toronto, Dave got to drum with Iggy Pop. It was at this point in the show that I can tell you I realised, absolutely, Dave Grohl isn’t just a great musician and a fantastic storyteller. He’s also really funny. “Holy fucking shit,” he remembered thinking when he realised he’d get to “share the same air as Iggy Pop.” His description of seeing Iggy Pop for the first time, live and in person as he got out of his car that day, made the audience laugh and also rang true: “It was like seeing a fucking UFO!”

You know where the narrative goes from here. Dave joined Nirvana and moved to Seattle, where he shared an apartment with Kurt Cobain. He slept on Kurt’s couch, and he made us all laugh again as he described Kurt’s pet turtle, longing to escape, banging its head nightly and incessantly against the glass of the terrarium. Nirvana had incredible success, and Dave has warm memories that he seemed to truly enjoy recounting in this intimate space. But it’s also a tragic story with a devastating end. Dave transitioned from Kurt’s death and the end of Nirvana with an acoustic performance of This Is a Call, the first track on the Foo Fighters’ eponymous debut album. When it seems like there’s nowhere to go and it’s dark, there’s still music.

Many years, and many more stories, are punctuated by acoustic performances of My Hero, Learn to Fly, and Best of You. Each of the songs are narratives unto themselves, revealing the interplay between music and storytelling. And finally, as the night comes to an end, it’s not goodbye, as Dave says, but one more story: and, of course, it’s Everlong.

For more of Dave Grohl’s stories, you can buy The Storyteller: Tales of Life and Music and follow @davestruestories on Instagram.