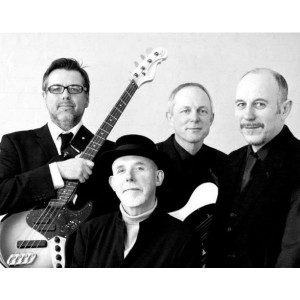 Dave Formula And The Finks

I have to admit that this was a highly anticipated gig by myself and the staff at The Prince Albert added to this by telling me that the soundcheck was one of the best they had heard. Very promising.

The Near Jazz Experience are the side project of Terry Edwards, Mark Bedford and Simon Charterton. Quite a pedigree, but anybody expecting a set of Gallon Drunk, Madness or Higsons covers would be very disappointed.

The band play an excellent set of free jazz improvisations, which should be no surprise to anybody who has listened to Terry Edwards work with Gallon Drunk and Mark Bedford of course has dabbled with this type of music before with Butterfield 8. Terry Edwards is the master of a number of instruments and plays at least five different types here including saxophone and percussion, sometimes playing two at the same time reminding me of The Blockheads Davey Payne, himself no stranger to playing two sax’s at once. A really entertaining set is helped along by the bands good humour, Terry Edwards strolling out into the audience with a sweet jar full of egg shaped percussion shakers, which he proceeds to hand to each member so we can all play along with the songs. Of course, he wants them back at the end of the set and it is good to see everybody lining up to return said items. The set itself is a superb reading of improvised jazz and would make a brilliant soundtrack to a movie about the seedy side of London. Edwards is the focal point and his sax playing is quite brilliant. It reminds me of John Coltrane and there can be no higher praise than this. If this band are playing near you make sure you catch them. You will not be disappointed.

Dave Formula, of course, should be no stranger to readers of Louder Than War. The brilliant keyboard genius behind Magazine and Visage it does at times seem as if he has become forgotten by most of the media, which is nothing less than a travesty because he was one of, if not the best keyboard players of the Post Punk era. His 2010 album, Satellite Sweetheart was criminally overlooked, a number of brilliant collaborations with a galaxy of artists including old oppo, Howard Devoto. This album perhaps points to the direction he has taken with The Finks.

As with The Near Jazz Experience, anybody expecting a set of former glories will probably be disappointed. Dave Formula And The Finks play a quite brilliant set of soul/jazz instrumentals in the style of Booker T, Jimmy Smith and James Taylor. The kind of music that would get the dead up and moving. This should not come as a surprise as Mr. Formula began his career in overlooked 60s outfit, St. Louis Union who dabbled in the Soul idiom. And you can also hear this influence in Magazine numbers like Give Me Everything . Check out the keyboard solo in this. Very Booker T.

The Finks themselves consist of Keith Angel [drums], Dave Angel [guitar], and Andy Seward [bass]. They mostly made their name as session musicians with a variety of acts and are a quite superb band, never missing a beat. It really is a pleasure to watch masters at work. And any band who have a copy of The Kinks logo [The Finks – get it?] on the drum kit is ok with me.

The set contains a number of originals mixed with carefully chosen covers and I for one was transfixed with the brilliance of the playing. Booker T’s Time Is Tight and One Mint Julep, The Phil Upchurch Combo’s fantastic  You Can’t Sit Down, The Meters’ Cissy Strut and even Harry J Allstars’ Liquidator are mixed with a number of originals. This band should be massive with anybody into 60s soul jazz. Dave Formula’s Hammond sound if of course of the highest callibre and I would defy anybody to stand still while this band are playing.

The good news is that it seems an album is to be recorded imminently and I would hope this sells in numbers great enough to put this band on the map. The bad news. Sadly, a crowd of maybe 60 people at a gig with so many famous names on show. I will be singing the praises of both bands to all and sundry now and hope that next time they play there is a decent turnout. These guys deserve that.

This was a quite brilliant gig and anybody out there who sees any of these bands advertised to play near them would be well advised to attend. It is great to see musicians at the top of their game and both of these bands are definitely that. Quite superb.

All words by Simon Kvalheim whose Louder Than War archive is here.