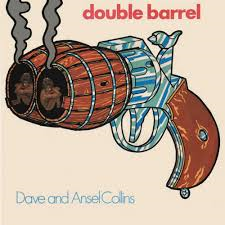 Enhanced re-issue of the Reggae duo’s 1971 debut album, with extras including rare tracks recorded under the watchful eye of Winston Riley from 1969 to 1971…..Ian Canty hears the originators of the “heavy, heavy monster sound”….

In the unlikely event that anyone asks me the question “what is your favourite number one ever?” I wouldn’t even have to think about it. It would be Dave And Ansel Collins’ mighty Double Barrel, which hit the top of the charts in the spring of 1971 (second would probably be Ghost Town, if you are interested). Even the slow slump that was setting in on UK Reggae sales couldn’t stop its incredible momentum. Both Dave Barker and Ansel Collins had been busy on the Jamaican music scene before embarking on a short, but ultimately extremely fruitful, career as a twosome.

Ansel Collins started out as a vocalist and became part of the Bobby Aitken (brother of the brilliant Laurel) and the Carib Beats band. Aitken encouraged him to play piano and there he found his true calling, specialising in the keyboard. He led the RHT Invincibles band and recorded for Lee Perry among others, before hooking up with a certain vocalist by the name of Dave Barker….

Kingston-born Barker looked towards the US for his vocal inspirations, with James Brown being a particular favourite of his. After stints in vocal groups the Two Tones and the rather better know Techniques, he recorded as a solo artist for Coxsone Dodd and Lee Perry. It was while with Perry that he had his first hits in Jamaica, with Shocks Of A Mighty showcasing his style of high and sweet, ecstatically performed Soul singing.

Originally recorded as a piano/organ instrumental workout by Ansel Collins under the auspices of Winton Riley, the hit formula was stumbled on when the producer asked Dave Barker to do Deejay chat on the track, something which up to then was not quite his forte. Of course he stepped into the breach remarkably well and magic was forged. Future Reggae legend Sly Dunbar played on Double Barrel also and the record quickly rose to the top of the JA charts in 1970. Almost a year later it hit the number one spot in the UK, May 1971 to be more precise. Because of the unexpected nature of the record’s success, Riley quickly quickly put together a live band to back the pair for promotional purposes and an album was prepared too.

Like many Reggae albums of the time that were put together in a hurry to cash in on single success, Double Barrel the LP is a bit of a mishmash of Barker and Collins’ solo work with a few “proper” duo recordings. Even though it would have been nice to see what the pairing could have done at the time over the course of a whole LP as a joint entity, this approach doesn’t sully the quality of the material on offer here. Given their collective recordings prior to Double Barrel’s huge success, cherry-picking was always going to be child’s play, although it doesn’t hang together continuity-wise quite as well as it could have (Dave’s not heard from after That Girl, with still of a third of the album left to go). Only two contributions on the original album are credited to the duo, the others Dave Barker accompanied by Winton Riley’s Techniques or Ansel Collins solo offerings.

But that aside there is much to enjoy. After kicking off with that tremendous single, Barker’s contributions with the Techniques give him the chance to show he was much more than a DJ toaster. He has a great voice which is used well on the slow-paced My Best Girl and Elfrego Bacca and, with an unnamed backing outfit supplying the music, the cool Soul vibe of That Girl is a real treat. Among the bonus recordings there are some more Techniques gems, Lonely Lonely Man Am I and The Heart Of A Man both hark back more towards Rocksteady, but are still fine examples of that genre. Both I Feel Alive and Your Love Is A Game are very soulful indeed, Dave was in his comfort zone here and he thrives in it.

On the album proper though Ansel’s organ sound dominates. Though the Monkey Spanner single itself was not included, there is a version of it where Collins’ smooth keyboards take the lead roll and Wild Bunch is a late period Skinhead stormer, with Secret Weapon being another great effort, utilising horns in its instrumental attack. Bonuses include the classic organ-instros Point Blank and Iron Joe, which features an uncredited DJ talkover intro that sounds a lot like Dave.

I The Third is the only place on the album where Dave and Ansel come together, this one is pretty much styled in the same way as Double Barrel and Barker garnishes it with James Brown-style screaming. It works very well, as does the non-LP Soul skank of Doing Your Own Thing and the second, slightly tougher, version of Double Barrel single.

Although the album performed disappointingly in the UK, barely grazing the Top 50 in a two week stay, the next single was a success. Unlike a lot of follow ups, this one didn’t seek to replicate the hit wholesale and the fresh approach was rewarded with another Top 10 hit. Money Spanner was different, its lazy, loping stride a marked contrast to the jagged rhythms of Double Barrel. Barker’s “Heavy Heavy Monster Sound” DJ line would be taken by Madness (the “don’t watch that, watch this” bit was taken from his song Funky Funky Reggae too) and added to their version of Prince Buster’s One Step Beyond at the other end of the 70s, so they obviously made a mark on a certain bunch of North London youngsters. However Monkey Spanner’s success wasn’t enough to make the pair stick together and they went back to their respective solo careers.

Though Dave And Ansel Collins’ stay at the top of the charts and as a pairing was brief, during their time together they knocked out some classic sides and their appearances towards the top end of the UK charts were a much deserved for their sterling efforts. This new, expanded edition, gives us a broader view of both artists and includes a couple of stone cold Reggae classics. Pretty much essential, I would conclude.