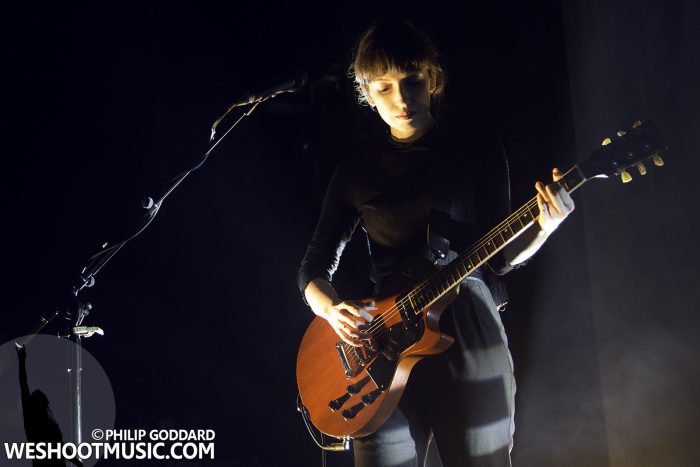 Louder Than War’s Michael Halpin watched Daughter live at the Academy in Manchester on Monday night. They are certainly masters of their craft.

Although Daughter’s laid-back, mesmeric style may not be to everyone’s taste, their intricate, well thought out music certainly lifted the boredom out of an autumnal Monday evening in Manchester. Their other-wordly musical creations taking the audience to an entirely different place. Clever lighting enhanced the reflective, introspective nature of Daughter who appear to be lovely people, humbled by the reactions they received from their Manchester audience. Granted they do not possess the fire or shot-in-the-arm that many say music needs right now but as escapism, Daughter definitely allow you to forget your surroundings.

Opening with ‘New Ways’ and ‘Numbers’ from this years ‘Not To Disappear’ album, Daughter received a warm reaction from their audience.

Daughter’s debut album ‘If You Leave’ was represented well also. Numbers like ‘Winter’ and ‘Youth’ being greeted enthusiastically by the pleasant audience. ‘Mothers’ provided the most heart-felt and emotional moment of the evening with the lyrics being genuinely difficult to listen to on a level that strikes a chord instantly within the listener.

More than ever before there is room for the likes of Daughter in popular music. Fan favourites ‘Smother’ and Shallows’ gaining a reaction that reflected exactly this.

An enthusiastically received encore followed in the shape of ‘Medicine’ and ‘Fossa’ and those who care for what Daughter do appeared to go home both happy and content.

Words by Michael Halpin. You can find more of Michael’s writing on Louder Than War at his author’s archive.
Photos provided by Philip Goddard of weshootmusic.com