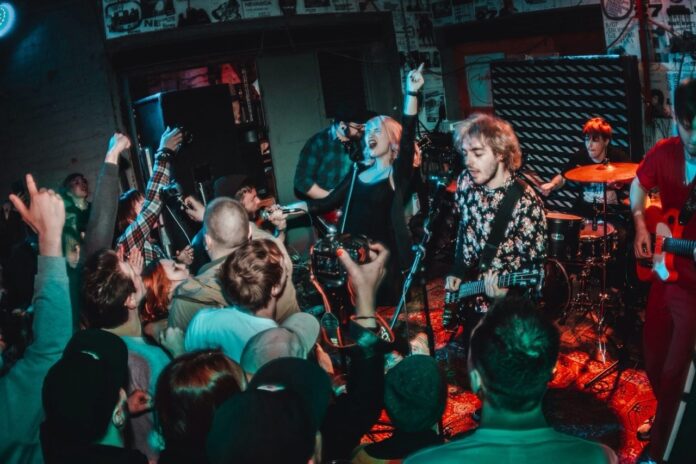 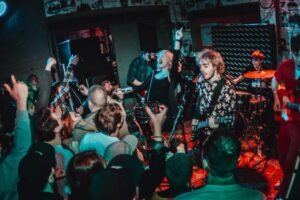 Daria Snegiryova is in her mid 20’s. She describes herself as quite an impulsive person saying: “I like contrasts.” Her mood is constantly changing and as Snegiryova notices: “I can love something just madly, or hate something – also madly. I’m only comfortable with the things I don’t really care about.” Despite such difference in her inner-state, her work on the debut Dasha Onzeroad LP sounds precisely consistent.

“Zvezdnoye nebo dlya tex, kto zhivet v gorode” [Star sky for those who live in a city] sounds like an extreme interaction of a variety of styles each of which doesn’t clash with the other ones. Like the molecules of oxygen that don’t touch each other. Snegiryova’s lyrics ranges from fall-in-love state to apocalyptic hate. She gets from whispering to a scream while the rest of the band has a change of musical line – from gentle tonalities to rapid chords. Her singing is dully in a way and she, herself, like one of those teenagers of the 2000’s, who grew up in a state of a constant depression. Partially true. Daria explains:

“At the very first shows I was quite shy and reserved. It affected the singing as well. Now I do feel myself a lot more comfortable…” – she says. Eventually, the project Dasha Onzeroad started as a meeting of two people. Like it always happens.

While attending Posledniy Tepliy Den [The Last Warm Day] festival in August of 2019, Daria met the future guitarist of Dasha Onzeroad – Jan Kustarov. “I was introduced to him by Seva from Bird Bone band.” – at that point Daria had just released her first single and had some amount of material for the possible EP. The friendship has begun straight away. Even though she admits: “We didn’t get along that time – probably because Jan was drunk (laughs). After a few months, he got back to me saying: “Cool! Let’s record something!”.

Daria started visiting Kustarov in his country house, recorded new tracks and got acquainted his family. “And It was Jan who offered me to put the band together!” – she says: “Initially, I thought about it as only a studio-project. It didn’t take us a while to put the whole band together. We found the bass-player straight away. An old friend of mine became our guitarist. Another friend took the place on the drum-seat. Even though he soon left the band. Now our lineup is settled down.” 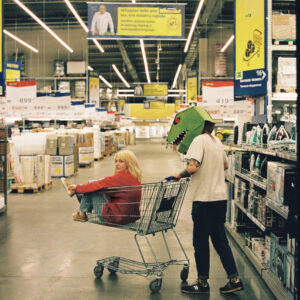 From then, it took sixteen months for the band to release the record “Zvezdnoye nebo dlya tex, kto zhivet v gorode” has become. “Just after the release of our EP in January of 2020 we started working on new material…” – at that point, the band was faced with the difficulties of the pandemic. “Nerves were shot…” – says Daria and I start understanding what provided the contrast of songs like “Beskonechniye Cadri” [Endless images] where Daria’s singing is interrupted by almost hardcore-like vocals by the band’s bass-player – Artyom Komov reflecting the uncertainties of the pandemic almost perfectly.

But there was another side of it. There’s always, right? Passing through this period of “rushing ourselves” as Daria says they decided to “Just let the situation go. Let it be like it would be.”

A lot of the songs were written by Kustavov and Snegiryova working together. She came up with vocal melodies, then the guitarist created the carcass of a rhythm structure, while ideas were slowly coming.

“I was looking for some resources while writing songs. There were lots of quarrels in between us. In Autumn we got from this all-consuming sadness keeping finishing what we’d started in Spring.” – notices Snegiryova. Following the words of the vocalist of Dasha Onzeroad, the band spend the whole winter finishing the recording.

Snegiryova stresses: “A lot of these songs got recorded in this home-type-of-atmosphere with Jan’s daughter – Polina, jumping and running around. Yes, we took more time then expected but now I can say that each song became something special to me. “

“Zvezdnoye nebo dlya tex, kto zhivet v gorode” was finished in the Spring of 2021 and came out in July. Daria comments saying: “Quite a nice month to get born. Shiny, wormy.” At the same time there’s another side of it on the record. The band doesn’t associate itself with punk-rock but there’s a part of it in what we’re doing. Combining post-punkish tonalities and festering the tempo, they develop the song-structure while staying the same. Dasha Onzeroad found the perfect proportion of elements of their sound that always remain in equal position. Partially, that’s the efforts of their vocalist. When I ask Daria about this quality of the band, she refers to one of the old conversations with the rest of the band-members saying: “Following their words, the reason for this is this “sand-ness” of my voice. Whatever that means.” 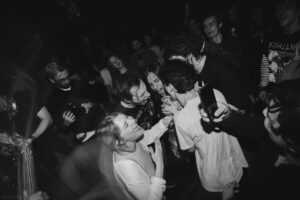 Initially, Daria was worried about it: “I took some vocal lessons –  to get rid of it. To sing clearly. But then, they all said: “It’s your thing! Do what you want on the shows but when it comes to the recording – squeak just like always!”. Quite ashy and reserved person, now Daria found her comfort zone – whether it’s recording or playing life. She admits that: “I feel much easier about playing shows with my old friends, play our songs. Step by step I learn to contact with our listeners and it works quite well, as far as I can see.”