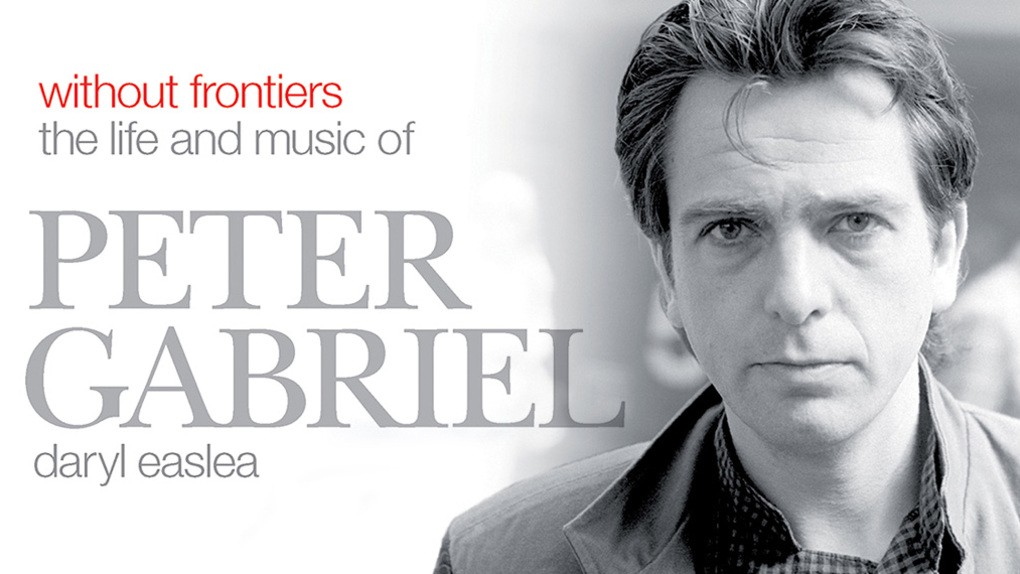 WITHOUT FRONTIERS; THE LIFE AND MUSIC OF PETER GABRIEL

Revised and updated version of Daryl Easlea’s 2013 in depth biography of a musician whose pace of musical output might be glacial but whose integrity and humility  remains of the highest order.

The world might have felt like it was shifting on its axis with the various goings on  in the five years since the original publication of Without Frontiers, yet within Gabriel world, not much has changed. Aside from  any tweaks to the original text, events since the first edition are quickly brought up to speed with the addition of a new chapter. Long term friend and early musical partner Richard Macphail, also adds a postword while getting in a handy plug for his own book; one that the majority of readers of Without Frontiers will have read or will now no doubt intend to.

The update also checks in with Brian Pern and the sudden development of the desert dry Gabriel humour via his occasional stand up routines – seen at various awards ceremonies near you including the occasional duo act with his oldest and best friend/worst enemy Tony Banks (he’s the one, not with the short fat hairy legs, but the hair) and who wishes he were more like Tony Pebble of Thotch.

Otherwise, Daryl Easlea proves the perfect guide through the Gabriel years of Genesis, the early solo days through to the worldwide success brought by So and the subsequent thirty (good grief – THIRTY!?) years since, that have seen Gabriel spreading himself very thinly while pouring himself into various film, Real World studios, world music, family and more projects. If you’ve ever wondered where he’s been since 1986’s So – apart from 2002’s Up album and his So anniversary/New Blood/Scratch My Back bouts of touring, here’s the place to update yourself.  ‘Expect the unexpected’ the tag line for the first Gabriel solo album back in 1977 might in hindsight have fitted his career very nicely.

The opportunity to marvel at the  complexity of the Gabriel character comes hand in hand with the  raising of smiles (at the title of the chapter on the Charterhouse schooldays – ‘Crying Or Masturbating. Or Both: Charterhouse’) and eyebrows (the throwaway yet immensely important  snippet about one time Gabriel keyboard player Larry Fast watching VHS film of the 1982 Six Of The Best reunion concert at Gabriel’s home. A notion that still tantalises fans about ever seeing that footage.)  Then there’s the  revelation that the famous Biko chant might have had its roots in a Genesis gig at Princes Risborough in 1970 – filling a gap during an equipment failure. And the fact that it was Mike Rutherford who played the electric sitar on the Genesis ‘hit’ I Know What I  Like when it seems to be presumed that  Steve Hackett , who instigated the riff, was the guilty party. Revelations indeed. Not much on the sex and drugs and rock and roll, Gabriel’s only guilty pleasure (aside from the numerous women he’s dated) is cooking the family turkey at Christmas even though he’s vegetarian.

However, for a man who according to both Phil Collins and Richard Macphail, starts most of his sentences with an “err…” or and “umm…” (sometimes both) Gabriel has the rare sense of articulacy. He may have suffered for his art – he’s portrayed by many friends and acquaintances as indecisive and as Mike Rutherford says  “always asking that question…wondering if it should be like that”  and the desire to have fingers in so many different pies. He’s not a completer yet remains a massively influential and fascinating character. Hence the ongoing speculation about whether (or not) the next book update might give Daryl something to celebrate in  coinciding with a new album. I wouldn’t bet on it.