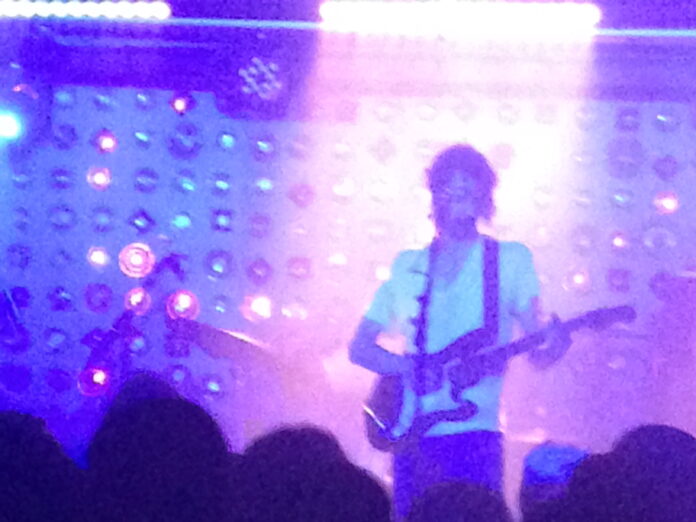 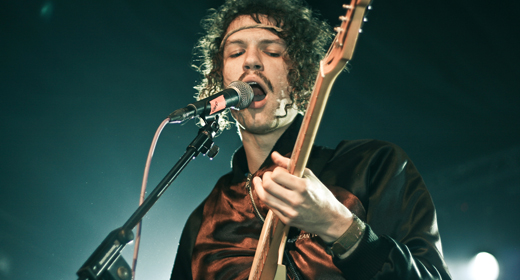 Darwin Deez – a regular on Britain’s live and festival circuits – garner critical acceptance wherever they go across our shores. Routinely then, like many indiepop casulties of the last few years, it’s taken their homeland of America years to catch up. Clive K Hammond witnessed the mayhem and their breakthrough moment over in New York City.

As a reviewer I have been blessed to see New Yorkers Darwin Deez many times. Each outing brought an ambience of excitement; these were the guys who made infectious indie-pop fit for the unbuttoned youth who were eagerly ready to consume its coolness. It’s never boring when Darwin Deez are in town. The uninterested outfits, hairstyles and mannerisms. ‘Hip’ isn’t really a requirement when the four piece announce a show.

Oddly, though, when they take to the Baby’s All Right stage of New York – a city millions of miles away in terms of Manchester’s brewing music scene – it’s in front of a crowd crammed into a venue ready for 200 people. Maximum. A very strange occurrence. Sell-out. Of course. But when routinely a band that fronts up to 1500 followers in Ol’ Blighty shifts back home to next to nothing – whilst carrying out their own soundcheck – a ‘here-we-go-again-another-kings-of-leon-whereby-they-are-embraced-by-us-but-not-by-them’ feeling kicks in. Bizarre.

Baby’s Alright is plainly becoming Williamsburg’s finest bar. An existence of merely years, the calibre and set-up is compulsive. Shimmering lights adorn the backdrop; an open view bar where the particular act can be seen; food, if required.

Everything is there for Darwin Deez. It’s unimaginable to think it’s not.

Tonight was a typical Darwin Deez set; everything the world – and in particular we – have become accustomed to. Frolicking dance maneuvers ranging from drunken shapes cut against Spice Girls to intricate, sweat lifting 80s tracks. There wasn’t a single soul unprepared for the recreational fun suggested.

Opener ‘Constellations’ – wildly in love with the jerking mayhem most 00s indie bands pride themselves on, it remained a beacon of dance-floor euphoria that allows the only outcome to be swift gyrating – was followed by ‘Up in Clouds’ – taken from their eponymous 2010 debut, the retention of loose floating melodies and brittle guitars continues; another beast among a catalogue of ardently hemmed tunes – and this was a temper that proceeded throughout. This inaugural release was the pulse of the evening; almost gone were the follow-ups.

‘Kill Your Attitude’ and ‘You Can’t Be My Girl’ shy away from the premise that has been set. These are songs that sound anti-Deez; more grit, more balls, less entertainment. There’s a real sense of maturation here.

But the confliction of their debut between sanguine settings and punishing lyrics endured; ‘Bad Day’ – willingly wishing a former flame to be unkept, it heightened the audience after a short pause between booze replenishing with yet more frantic bursts of driven guitar against a halved rhythmic feel – and ‘Radar Detector’ – perhaps the group’s most renowned track, it’s a blast of cycling vocals that declines to wilt leading only the sternest of dry NME reviewers to call it ‘alright’ – are finale worthy and concluders.

Uncanny. I’ve always envisioned the likes of Darwin Deez to be on a rollercoaster of consequential shows. Each time better than the last. And this continues to be the case. Just. Not as big an environment. New York may not be worthy. But. Manchester. Is.

All words by Clive K Hammond. More writing by Clive on Louder Than War can be found at his authors archive.