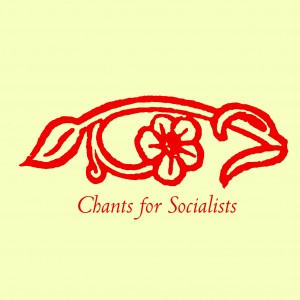 You could say that Darren Hayman is less a songwriter, more an archaeologist. His post-Hefner discography is full of forgotten or maligned voices, scavenged from the damp clay of the past and presented in sympathetic contemporary settings to sing to us anew. The ‘lonely, widowed women’ executed for witchcraft in East Anglia in the 17th century whose tattered ghosts haunt The Violence. The man ‘who doesn’t escape’ from crumbling concrete and urban frustration in Pram Town. The dogs sent into space as part of Soviet space programme in Little Squirrel, Little Arrow.

For his most recent project, Hayman turns to William Morris, the 19th century artist, poet, designer and social campaigner, whose Chants for Socialists pamphlet he came across while visiting Morris’s home (now the William Morris Gallery) close by his own base in Walthamstow. Morris is hardly an unknown but his politics, arguably, couldn’t be more unfashionable in our present austerity and immigration obsessed political climate, where pitching people and communities against one another for the enrichment of an elite seems to be the overarching mission.

Louder Than War readers may be familiar with Morris through his beautiful, medieval-inspired wallpaper and textiles designs or his revival of traditional production methods for textiles, which inspired, in part, the influential Arts and Crafts movement of the late-19th and early 20th century. And very lovely it is too. But Morris was also committed to freedom, equality and justice, believing socialism was ‘the cause’ that could improve the lot of poor and a working class languishing with few rights, bad pay and for the most part grim working conditions.

It is from William Morris the campaigner and political firebrand that Chants for Socialists springs. Morris’s texts are utopian poems, full of solidarity and humanity, nuanced rather than hectoring, evocations of the natural world rubbing up against hymns to the dignity of honest work and the fellowship of all men and woman. As Hayman says on his website, they are about “simple kindness and hope”. Suddenly these missives from the nineteenth century, which should be museum curios, seem incredibly relevant.

A little work was required to help Morris’ words jump the gap in time that separates us from him. Hayman wielded the red pencil, bringing the syntax up to date, removing verses and generally tidying the Chants up for a contemporary audience. Yet he retains the flavour of Morris’ flowing cadences, resulting in a set, which sounds modern and archaic at the same time. Even more strident pieces like All For The Cause are shot through with cracked lyricism. “The lips of loved and lovers/Will praise the fools and dreamers/All for the cause,” he croons.

Elsewhere tracks like Down Among the Dead Mean end up sounding a bit like Hayman’s own lyrics for The Violence, but with the eldritch paranoia replaced with a dreamy wit. “There’s liquor left so let’s be kind/And drink the rich a better mind/That when knock upon the door/They may be off and ay no more”. His old chum Robert Rotifer’s wonderfully arrangement – all stomping rhythm, brass band and choir – deepens the wistful vibe.

Hayman provides fairly unadorned backing for the rest of the tunes, recorded at three of Morris’s homes: the aforementioned William Morris Gallery in Walthamstow, Kelmscott House in Hammersmith (where Hayman used Morris’s Albion press to handprint the rather lovely record sleeves) and Kelmscott Manor in Gloucestershire, where he even got his hands on Morris’s own piano for added verisimilitude.

In general he leans towards a folky, slightly country-inflected style that allows his take on Morris’s words to stand out. The sunshine pop of May Day 1894 fairly breezes along, its evocation of springtime buoyed along by massed vocals of an amateur choir, convened for this album only by Hayman and consisting of anyone who was around for the recording dates.

The choir pops up on most of the tracks, to pretty good effect given their lack of formal training. Opener Awake London Lads is feisty, performed acapella as a vigorous overture for what is to follow. On the beautiful circling chords of The Voice of Toil they stick to the upper register, adding an emotional punch to the refrain, “Are we not stronger/ than the rich and the robber / when day breaks over our dreams,” which comes over like a message of hope in a ruined world.

This all comes together in The Message of the March Wind which, for my money is the highlight of this marvellous album. Its gauzy piano chords and drowsy fuzzed out guitar are perfectly matched by its otherworldly lyrics, which speak of winds blowing through the countryside bringing news of revolutionary unrest from London to the birds, beasts and flowers in the fields. “For the hope that none see / Is coming to light / Like the seed of midwinter / Unheeded, uncherished / Like the love that took us / Unwares and uncherished,” sings Hayman, his vocals half-somniloquy, half-incantation, their pure bloody poetry heightened by the dreamy choral back up. It is almost narcotic in its numbing warmth, Golden Brown meets Who Loves The Sun in a daffodil-strewn meadow under the first rays of a springtime haze.

As political albums go, Chants for Socialists doesn’t quite match classics such as Crass’s The Feeding of the 5,000 for righteous, barbed wire fervour. But that was never the intention. Too many supposedly ‘political’ songs are rubbish anyway, platitudes spouted by the privileged from their gated mansions in Surrey. Instead, Hayman gives us a balm for troubled times, a subtle reminder that other ways of thinking about politics and stuff in general are possible. Change can come when you least expect it. For now, hunker down and listen. For tomorrow’s uprising will be sweet.