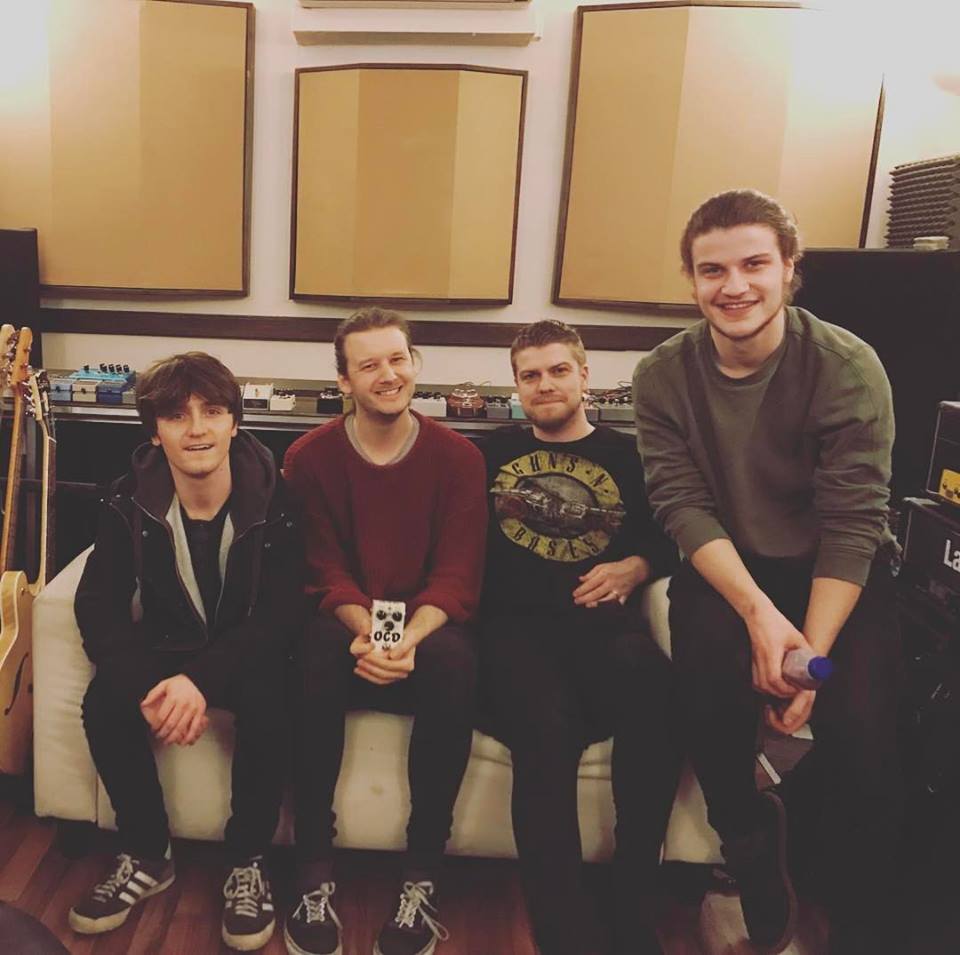 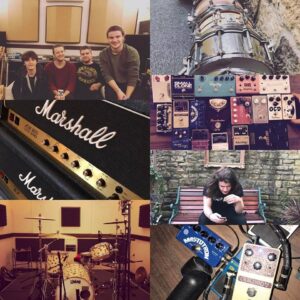 Louder Than War caught up with Manchester band Darma who have just finished recording their first album.

Roxy Gillespie asked Harry Corbett, Isaac Whitehead and Lloyd Whitehead some questions about the process and delved into the realms of fantasy to find out what makes the band tick.

Louder Than War: You shared a lot of the process of making the record on social media. Was it important to have your fans involved in the process?

LW: Definitely. Social media has made everything more inclusive now – gone are the days Led Zeppelin would disappear to a cottage in Wales for 6 months and nobody would know anything about what was going on. Also for transparency, there’s no bullshit, it’s just four guys eating, sleeping and living in a studio to create something amazing.

IW: Yes, absolutely. The fans are as big a part of this as we are, we want to include them in everything we do. After all if it wasn’t for them, we would be playing to empty rooms!

HC: Yeah, definitely, we wanted to involve our fans every step of the way. In today’s world there’s no room for mysterious bands keeping everything hush-hush. You’re either out there or you’re forgotten! We need to up our social media ‘game’ if anything. But as the gigs ramp up so will our content.

Louder Than War: You have been a very self-driven outfit so far. Did you take any advice on board from people outside the band on how the record should sound?

LW: Bob’s opinion obviously played a part. The sounds we want may not always translate well into a recording but other than that, not really. We’ve listened to people in the past and never been happy with the results – when you hear this, it’s exactly how we wanted it.

IW: Looking back on it no, we knew what we wanted to hear, and how we wanted it to sound, we took that to Bob and he absolutely smashed it, we are so proud of this album, it sounds incredible.

HC: We’d recorded our last two EPs by ourselves in our rehearsal room and for us to make an album was a big step, so we needed another set of ears to guide us along the way. Bob had been keeping tabs on us for a while and really understood what bands want from a producer. So it was a no-brainer! 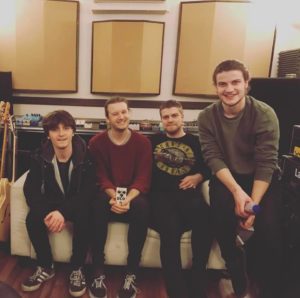 How enjoyable did you find the recording process?

LW: It has its ups and downs. As a bassist I sat there for the most part not playing anything and only really contributing ideas to the other two. When your time comes though, it’s amazing. Scary – that every little fuck up and bum note will be there for the world to hear for the rest of time – but that adds to it and you’re forced to up your game.

IW: It was brilliant, we learnt so much! After recording in Harry’s bedroom and coming out with two very good sounding EP’s it was mind blowing to hear the clarity of a professional recording, and Bob is such a nice guy, he was genuinely a pleasure to work with.

HC: Loved it! Recording in that studio was the best experience so far, it’s where we get to take a blank canvas and create our message to the world. I can imagine for the other two it got rather boring in parts but I was over there in the control room making sure everything sounded amazing.

Any juicy gossip or fisticuffs between you or did you have a pretty good idea of what you all hoped to achieve?

LW: Sometimes things can get heated with me and Isaac, but if you can name me a band with brothers in that has existed harmoniously for its entire existence, I’d be surprised. The arguments we have are always personal and never musical – kind of the flipside of most bands!

IW: Fisticuffs not so much, more of ‘Isaac do this rather than that’ and ‘Harry do something cool here’ although I’m sure Lloyd wanted to punch me at times! Also what Lloyd said, find me a band that has brothers in that hasn’t fallen out at least once.

HC: Them two actually get on a lot better than you’d think, most of the time we all get on quite well. We’re all on the same page regardless of any disagreements we may have. Once a band is all on board to achieve the same goal, you can conquer the world!

You worked with Bob Cooper at Crooked Rain Studios in Leeds. What made you decide to use him to engineer your album?

LW: He just gets it. There’s one song off the album that we said, ‘We want to do this live – no click track, no guide, nothing. Live’ and he went ‘Sweet! Let’s do it!’. He has this phonogenic ear for guitar tones and snare tunings, but when it comes to performances he understands that a track should move and breathe with the artists – there’s no quantizing or auto-tuning anywhere on this album.

IW: He came to one of our shows and we had a chat with him afterwards, he was so genuine and his knowledge of his studio and the sounds created in there is incredible, if you want something so specific even you can’t describe, Bob will suggest such a pedal and it will be everything you dreamed of and his snare tuning is to die for, eurgh!, I love him!

HC: His passion for our style of music, his quality of what he produces and the fact that he’s one cool dude. He gives it his all every day, I respected that a lot and thought we’d be a great fit in the studio. We were right!

Hopefully this will be your first album of many. If you could work with anyone living or dead in the future, who would that be and where would you dream of recording?

LW: Rockfield is the dream. Rockfield with Tom Dalgety, Bob and Butch Vig. We’d love our next record to be all out at Rockfield. Some of our favourite albums have been made there and the drum sound is always immense.

IW: Lloyd’s pretty much smashed it there!

Continuing the fantasy theme, who would you like to perform a guest spot on any future recordings?

IW: Dave Grohl on Drums. The one living man I’d give my throne up for!

LW: Probably what Isaac said. I don’t know if I’d trust anyone with the bass parts – maybe John Deacon. I’d love Matt Bellamy to do a Butterflies and Hurricanes-esque piano bit in a song – and maybe have Tom Morello co-write one with us.

HC: I want some backing vocals by John Frusciante. His ability for harmonies gives me chills. It’s a shame he’s gone all Acid house now. I’d also love to work with any of the guys from Tigercub, Dinosaur Pile Up, The Wytches, Deap Vally and Demob Happy. They’re making the best music right now.

Have you got a name for the album and details of a release date? If not when will we find out?

LW: We’re thinking late May/early June currently. Everything HAS to be in place – we can’t just throw an album out into the ether. As for a name – that’s a sticking point. How do people even name their kids?! I’m too worried naming the album might not sound right!

HC: We’ve made a killer album, we want to tour the legs off of it. We just need the money. If anyone would like to help our cause, send us an email! (haha kidding). Basically we need to get all the elements ready, then we’re gonna be everywhere.

Have you got any plans to tour around the release of the album?

LW: Definitely! The whole point of the album was to get gigs really. We enjoy writing and loved the recording process but gigging is where it’s at. We want to play everywhere so if you’re a promoter or band reading this – hit us up! We’re game.

HC: Touring is our number one goal this year. Getting people inside the venue to create some magic and change people’s lives would be the second goal. If we can make it financially viable so we can make another album, even better!

What’s next for Darma?

HC: How long have you got? We know what we want to do and we know what we have to do to get there – we’re currently looking for some backing to help us get to where we want to be. The dream is to live for the band and have it provide a living for us. We knew we needed material that sounded amazing – that’s ticked off. We just have to get it out there to the people who like what we do and build a loyal (and huge) fanbase.