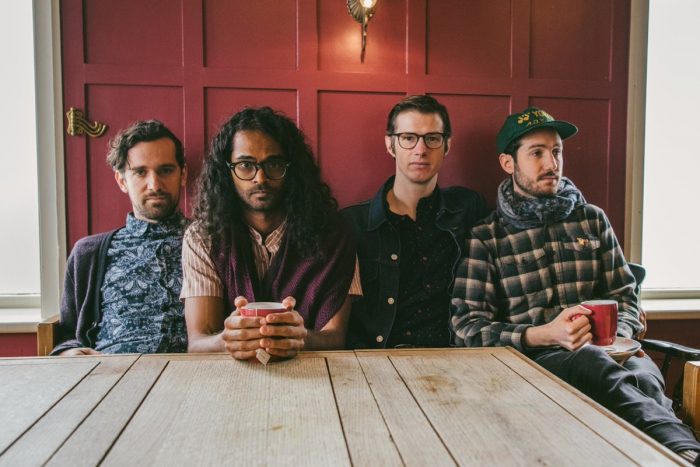 Darlingside comes from darling-cide, the act of overcoming sentiment and getting rid of rubbish that initially charmed you into thinking it was good. Considering how much he has grown to love the band over the last six months, is Jon Kean therefore about to slaughter them? Surely not?

You may distantly recall June (and where has 2017 gone while we’re at it?). The BBC were screening an up-and-coming festival, just down the road towards Shepton Mallet from Glastonbury (buggered if I can remember the name). Anyhow, to nail this anecdote to some kind of purpose, you may well have been still up and vaguely watching the coverage at 0100 on Saturday morning. If so, and you hadn’t had a festival-sized helping of cider, and therefore could still remember some semblance of your own name, the name Darlingside might have stuck with you.

Heading into the wee small hours, the Massachusetts-based quartet played Go Back live, in the rain, outdoors in the BBC studio. I know that rain is only wet stuff and it would only be mid-evening in Massachusetts, but they were scintillating. The best sets of the Friday had been somewhat hidden in the afternoon and early evening, or on smaller stages, so for indomitable die-hards who hadn’t been existentially finished off by Paranoid Android, Darlingside had something of the Lazarus factor. Soon afterwards, they sold out the Union Chapel in London, a night in its own right that can only have been a deeply spiritual experience.

Gathered around a single condenser microphone, as is their rather charming USP, they blend all of their voices, with dextrous ease, bringing 60s folk, bluegrass, indie rock and chamber pop. Go Back was one of the big songs from 2015’s Birds Say album. Three years on, their new album, Extralife, will wing in gloriously on February 23rd, with a launch show due at London’s Courtyard Theatre on January 30th.

The first release from their forthcoming album sees Darlingside contemplating not just the end of childhood and innocence, as they did in their previous album, but the eschaton – the last act of a divine plan that brings the end of the world. Rather than being the full-on harbingers of folk, they are twinkly prophets, more issuing reminders that we still have free will and might be able to head the endgame off by being properly alive. Too much of life’s script is composed for us by others, so “if we don’t write it, who will?” Similarly, “Nobody here still reads,” and with no-one reading or writing, life’s arithmetic does not add up.

Eschaton brings an extra dimension of electronica to their sound, existing somewhere in a triangle of The Buggles, Owl City and Nintendo. Add in their voices and the upshot is celestial, stratospheric. It’s up to you whether you risk clicking on the track below, but you might just end up in an expectant state of suspended animation until February 23rd, when Extralife can finally be yours.