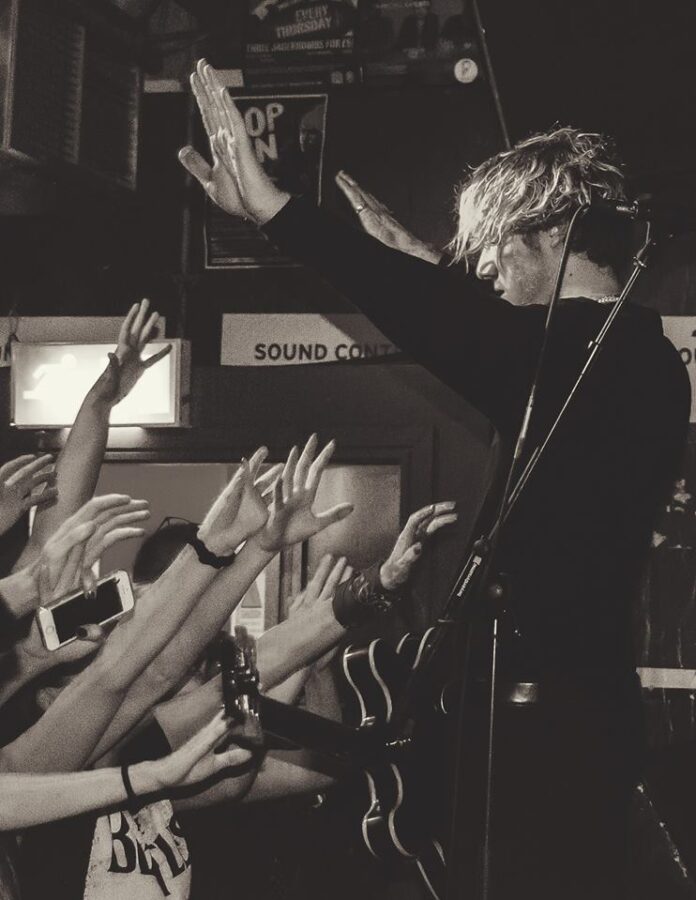 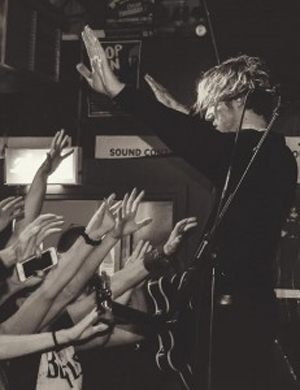 Blackpool trio Darlia play the final date of their UK tour in Camden’s Barfly. Harley Cassidy goes to check out the hype ….

It’s a really, worn out recurring theme that crops up in music publications all the bloody time – ‘Britain’s Next Big Guitar Band’. 9 times out of 10 it doesn’t work out and it leaves a messy heap behind, stagnating pitifully in their first EP. So, here at Camden’s Barfly, ‘the most exciting new guitar band in the UK’, touted by yours truly, Radio 1, are taking to the stage to Dick Dale’s Miserlou and yes, some kid next to me thought it was Black Eyed Peas’ Pump It.

If you’re going to try and make it in the UK music scene as an exciting guitar band you’re going to need at least a decent frontman. Palma Violets had it with Chilli Jesson and Darlia have it with Nathan Day. He’s mastering the skill of being captivatingly cocksure and it works. He flings himself around the stage with gusto, strutting and snarling for the camera as beads of sweat drip down his face, his voice sounding like it’s been steeped in the contents of a melting pot of genres from pop punk to 90s indie.

There are certainly enough bands being lauded left, right and centre as the driving force of the new music scene, saviours if you will, here to drag the music industry off its flattened arse and propel it to new heights. Are Darlia that band though? It’s hard to find where Darlia sit on this particular shelf; they have all the right components but nothing where you think, ‘man, I’ve never see this before’.

For some reason they’ve drawn some comparisons to Nirvana, which is kind of understandable in some ways: they have that whole quiet/loud dynamics thing going on, Day’s voice can absolutely batter a chorus and be controlled for a verse, there are Nevermind guitars all over the place and yeah, you guessed it, the frontman has blonde hair.

I’ve never saw a bassist get turned on by their own music more than Dave Williams. He nods and grins lustfully to the music in between swigs of beer whilst shirtless drummer Jack Bentham smashes the shit out of his set. It’s visceral, exciting rock music, there for heads to bang to, although maybe not the group of twelve year olds at the front flailing around. Napalm is greeted by cheers from the crowd who seem fairly attuned with the bands back catalogue.

The Barfly’s stage was made to be invaded (mainly due to shit security). Maybe I’m just seeing all the right bands at The Barfly (the last group was JAWs) but by the end of a band’s set, there’s always a throng of people surrounding them as the last note wails out. For Darlia’s set one guy stage invaded .… one guy. I mean that’s one more than a lot of bands but for some reason the audience’s hearts really weren’t in it.

It may be due to the fact that rather confusingly they left out the seemingly popular Choke On Bones despite cries for it, however, to compensate during the finale, Darlia seem to almost tease their audience. They meander their guitars softly into an unrecognisable riff before morphing it into a fully fledged attack on Queen of Hearts and the enigmatic howl of the chorus ‘Oh Aurora Borealis’ leaves most people departing satisfied with what they saw.