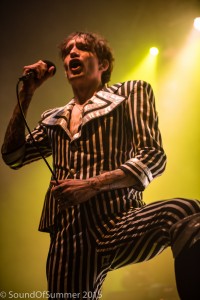 Thursday evening saw Alan Ewart head to Bournemouth’s O2 Academy to check on the progress of the Darkness, a band who are reformed, re-energised and playing some of the best shows of their career to date.

When you go to see the Darkness play live you have a good idea as to what to expect.  Loud clothes, falsetto vocals and a ton of energy are the Darkness’ stock in trade and Thursday was no exception.  The Darkness took the stage at spot on the advertised time to the sound of screaming guitars and blasts of blinding light.  Justin Hawkins hit the stage in a black and white suit that had trousers reaching to just below his knees and from the moment he arrived on stage it was clear that the legendary flamboyance was still very much in evidence.

The Darkness led off with Barbarian the opening track from their latest release “Last Of Our Kind,” arguably one of the most personal and intense songs the band have ever released.  I guess we shouldn’t be surprised by this, after all the tour is promoting the album.  What is perhaps something of a surprise is that the Darkness played no more than four tracks from their latest release.  Instead the vast majority of the set-list was made up of songs from the Darkness’ 2003 breakthrough album Permission to Land.

In the early days the Darkness flirted with the pop charts and as a result they have built a large and loyal cult following.  It was clear that many of those fans have followed the Darkness across the country on this tour as Justin shared in-jokes with members of the audience. 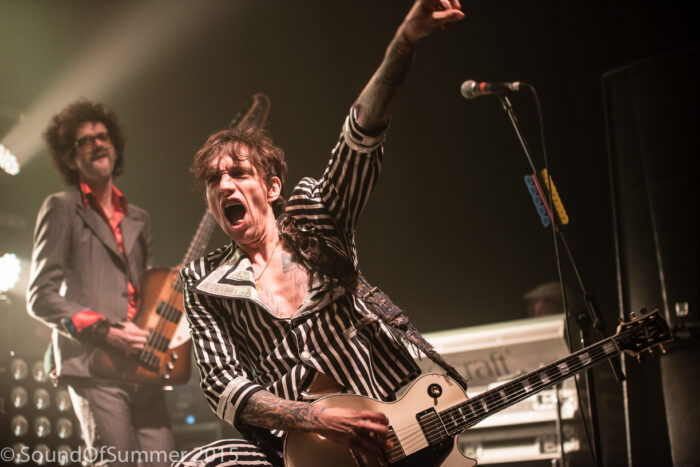 From the opening track it was clear that the Darkness had come for a good old pre-christmas knees-up as Justin encouraged fans to enjoy themselves.  Enjoy themselves they most certainly did as they sand along with Justin who was a bundle of energy as he leapt around the stage jumping on monitors, the raised drum platform and the speaker stacks.  As the evening progressed Justin reassured us by saying that he had been banned from climbing into the boxes at balcony level either side of the stage.  Thankfully on this occasion he didn’t attempt the climb.

The last time I saw the Darkness was when they played a secret set in the latest of the tents at this years Download Festival.  On that occasion they made their way to the stage through the crowd escorted by a phalanx of Vikings complete with shields and swords.  There was none of that on this occasion though we were treated to an inflatable santa and penguin during the encore. 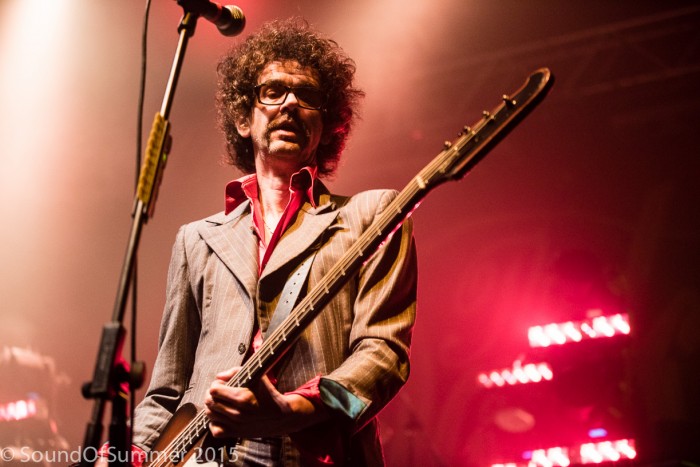 The Darkness are on a mission to bring big guitar riffs back into rock music and they did so with aplomb in Bournemouth.  Soaring riffs from Justin’s brother Dan competed with Justin’s vocal to be the dominant sound on stage and it was loud, the lights blinding as the crowd enjoyed an evening of pure theatre.

The Darkness’s shows are all about entertainment and for a shade under two hours the Bournemouth crowd were royally entertained.  The Darkness provided the sort of flamboyant and joyful performance that you rarely see these days.  Long mat they continue to do so.