Reykjavík’s Dark Music Days midwinter festival has now been a mainstay of the world’s contemporary music circuit for 40 years. But it feels particularly resurgent in 2020, as local hero and previous contributor Hildur Guðnadóttir brings home a pile of major film and TV awards.

Reykjavík’s midwinter contemporary music festival Dark Music Days (Myrkir Músíkdagar) reaches its fortieth anniversary and also its final year under the stewardship of Artistic Director Gunnar Karel Másson, who is moving on to oversee a swathe of Nordic festivals. Of course, this year’s Dark Music Days also coincides with the phenomenal rise to superstardom of Hildur Guðnadóttir. She’s long been a key figure in this intimate small-town scene, now suddenly she’s perhaps the most famous composer in the world, most recently adding an Oscar to her pile of major awards for work on Joker and Chernobyl. Hildur is one reason I came to Iceland. I came to catch as many shows as possible and experience the winter conditions. But I was also keen to dig into this hyper fecund moment in Reykjavík’s composed music, in the post Jóhann Jóhannsson era. Is there something explicitly ‘Icelandic’ in all this work and activity, or is it just a coincidence of talent?

For example, Hildur’s father Guðni Franzson is a central figure here and this week he conducts the Caput Ensemble in a church outside town, revisiting Gavin Bryars’ 2004 piece From Egil’s Saga. It was composed for the great Faroese bass singer Rúni Brattaberg, who is back to sing it again, twenty years on. The sound he makes is bloody wondrous. The concert has two more lovely pieces: Runner Of The Year is a work for chamber ensemble and exercise running machine, by young composer K.óla. The tempo is set onstage by a ‘fitness instructor’ who alters the machine’s speed for the soloist ‘runner’ to walk, jog, sprint on. It’s one of the simpler pieces and leans on its conceit but it’s fabulous fun. Veronique Vaka’s violin concerto Sceadu is all dense chords and rolling dynamics, to evoke a landscape seen from two different places. The orchestra is meant to be far away, the solo violin up close. It actually works. I stomp shapes into the snow outside feeling landmass-lonely.

Bryars himself came to town for the concert and he’s up for hanging out. I’m a bit starstruck but he’s good company; down-to-earth, funny and casually wise in conversation. Younger than on paper. During a Q&A at our hotel, he argues powerfully for an outward-looking manner of composition. For creating (at least some) works that are straightforward to perform (for example he advocates for scoring to include clues to assist less experienced choirs, such as ending a section on a note that singers will use to pick up from, when they next come in) as part of gaining access to as many potential performers as possible. He cuts through bullshit as only storied masters can. I could’ve hung out with Bryars drinking coffee all day but, just as I’m about to prod for Brian Eno gossip, he gets whisked off to look at a rumbling volcano. 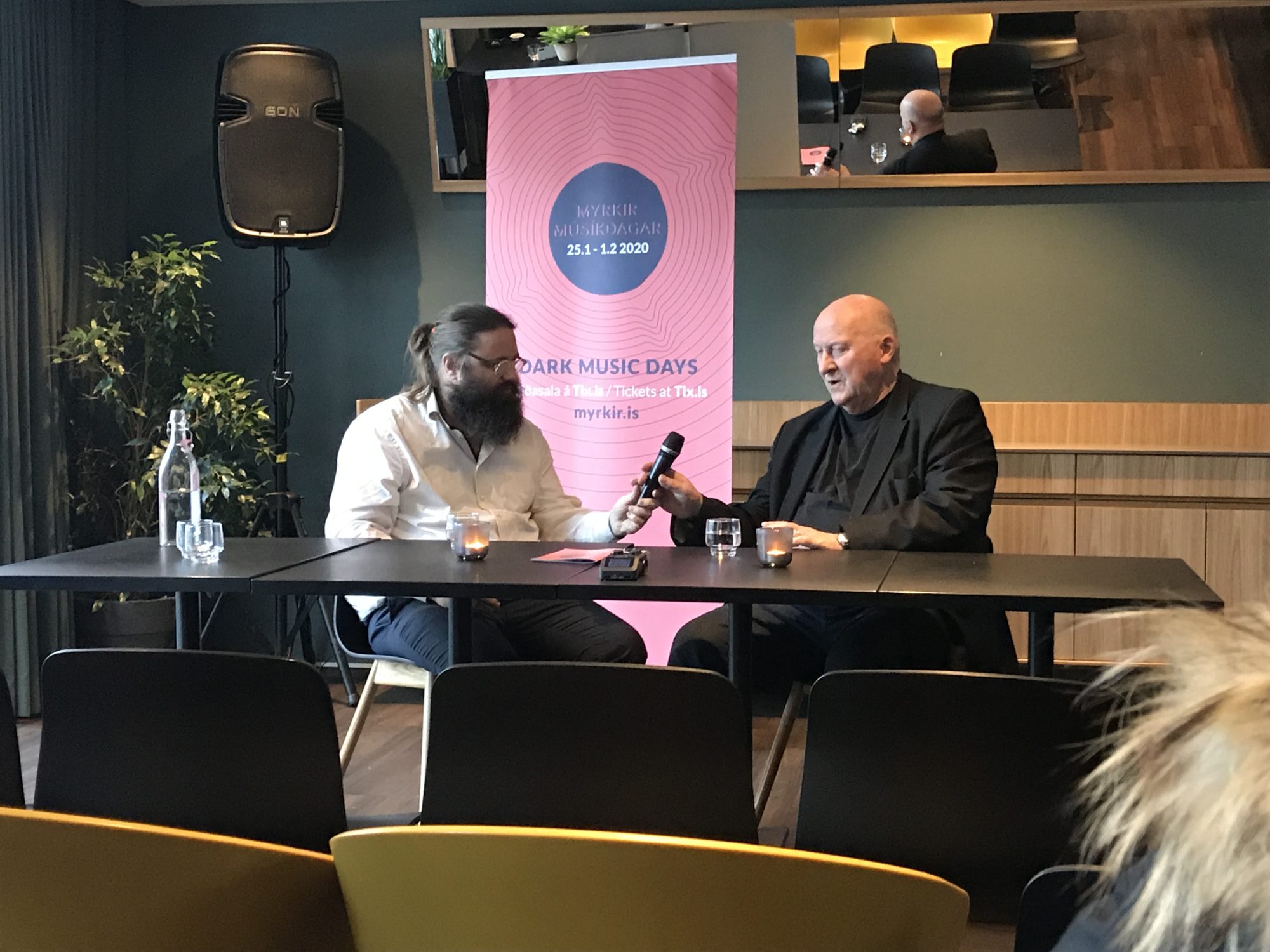 So: everyone knows everyone. Familiarity and comradeship here effortlessly cross the generation gap; in programming young and old works, grouping composers and also the social mix after-hours. It makes Dark Music Days feel venerable and bleeding edge, both at the same time. The breadth and range of the series is very impressive, despite focusing on the formally ‘composed’ end of the contemporary music world. The biggest shows (like Iceland Symphony Orchestra’s excellent evening of mainly local new works, or the closing night with Reykjavík Chamber Orchestra) take place in the city’s gorgeous signature venue Harpa Hall. A huge waterfront building, lit to grab sculptural attention, in the same ballpark as the new V&A in Dundee. But if they switched off those coloured lights, darkened, it would have the jutting angularity of a Star Wars Jawa sandcrawler. Everything here looks like Olafur Eliasson built it.

Umbra Ensemble’s intense performance of Blóðhófnir (Bloodhoof) in the small lakeside hall, Idno, is also transporting and has a timeless gothic noir, though it’s less surefooted. It’s a modern setting of Gerður Kristný’s award-winning poem cycle, composed by Kristín Þóra Haraldsdóttir. The piece reclaims an ancient male saga to imprint a woman’s perspective back onto it, Medea-ish. An English translation is projected up the wall, next to the original, yet soon I’m enveloped enough in the drama (and disinterested enough in the story) to stop bothering to read along and just allow myself to get lost in it. I do love how many women composers are being performed this week.

My outright highlight of the small shows is closer to my comfort zone of noise or even post-rock: Bára & Skúli are an improvising duo of bowed double bass (Bára Gísladóttir, whose hissing, tippy-tappy wave-like composition ÓS was played earlier the same night by the Iceland Symphony Orchestra) and electric bass guitar with a big pedal board (Skúli Sverrisson, who has made jazz, rock and scored music with Lou Reed, Derek Bailey, Ryuichi Sakamoto, Jóhann Jóhannsson and, yup, Hildur). Theirs is the after-hours heavy-arse drone kind of improv set, yet with enough clear melodic patterns and complex sonic flourishes to make the time absolutely fly by. They’re also a great example of the intimate, cross-generational creative openness that I’m scratching at: Bára, born in 1989, Skúli, 1966. They’re as good as anything I’ve seen in this genre for years. Apparently they’ve not toured as a duo but are accumulating recordings for a quadruple vinyl release. Yes. 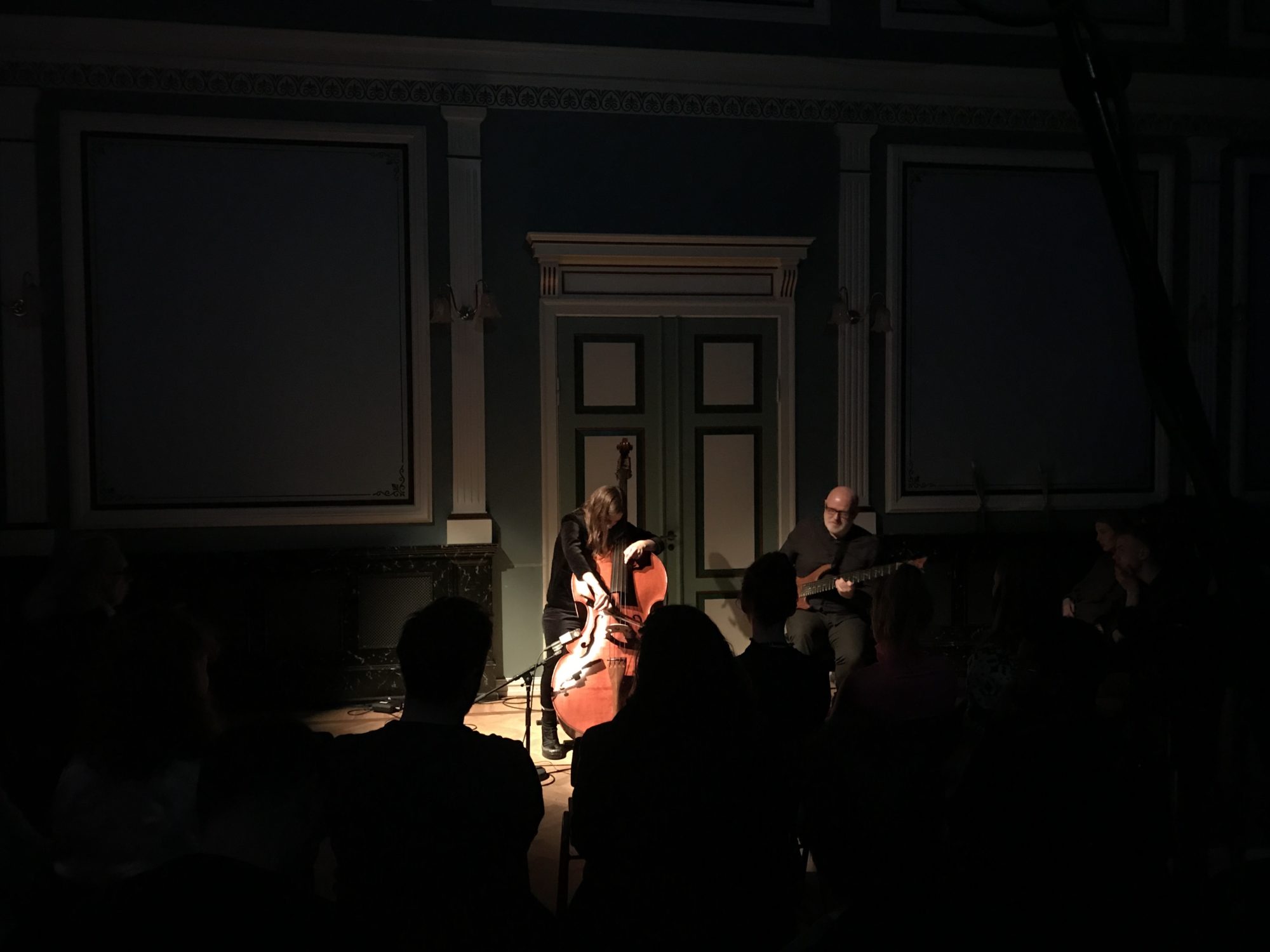 I also enjoy the delicate, self-consciously quirky Copenhagen-based Ekki Minna duo, British cellist Andrew Power and Icelandic accordionist Jónas Ásgeir Ásgeirsson. Their show includes blowing on large homemade cardboard comb things; tapping and blowing at their instruments; before climaxing with both musicians setting up a continuing unfolding loop, putting on angel wings and dancing in slow-motion around the hall. This is Áslaug Rún Magnúsdóttir’s piece A Lot Of Angels To Consider, and it’s funny, camp, yet at the same time very affecting. Opened up by the context, it feels to me as if they melt us all, via choreography, into another plain altogether. It helps that Idno is the loveliest little concert hall I’ve ever seen. The lake is frozen over, with a small section kept warm by an outlet of Iceland’s eggy-smelling geothermal water. Swans, ducks, geese gather. At this kind of festival, as our ears get attuned to hear anything as music, a load of large honking birds can easily become a constant avant-garde chamber ensemble, out there on the pond like a foyer show, every time we turn up for a concert indoors. It’s bewitching.

My favourite non-Icelandic discovery of the week is Pennsylvania-born composer and pianist Missy Mazzoli, new to me but clearly already with a big career in the USA despite not yet being 40. Two of her pieces are showcased at different concerts, on different scales. Both are succinct yet powerful, sophisticated bursts of emotional orchestration.

Back at Harpa, another moving moment out-of-the-blue is Reykjavík Girls Choir and its smaller, older sub-group Aurora, with two low-key choir directors making me think of the lead character in the film Woman At War and about how prevalent and radical such youth and community choirs are, across the Nordics. I saw a terrific school choir in suburban Copenhagen as well, last year. Here, the repertoire starts plain, rolls into richer and more complex, thickly ladled material than might seem possible for young singers. They cover Hildur here, too. In her choir director role, singer Hildigunnur Einarsdóttir plays it so low-key, she could almost be mistaken for one of her students. Then in Dark Music Days’ finalé concert later that evening,she emerges as a sensational soloist with Reykjavik Chamber Orchestra for the premiere of Kolbeinn Bjarnason’s unsettling, ambitious new piece Cannot Be Replaced. Hildigunnur is commanding, sensual; a stunning voice and presence. It’s a wonderful end, when I’d been distinctly unsure about this ensemble earlier in their set. At first they seemed under-prepared and out-of-sorts but by the second half they’re flying. 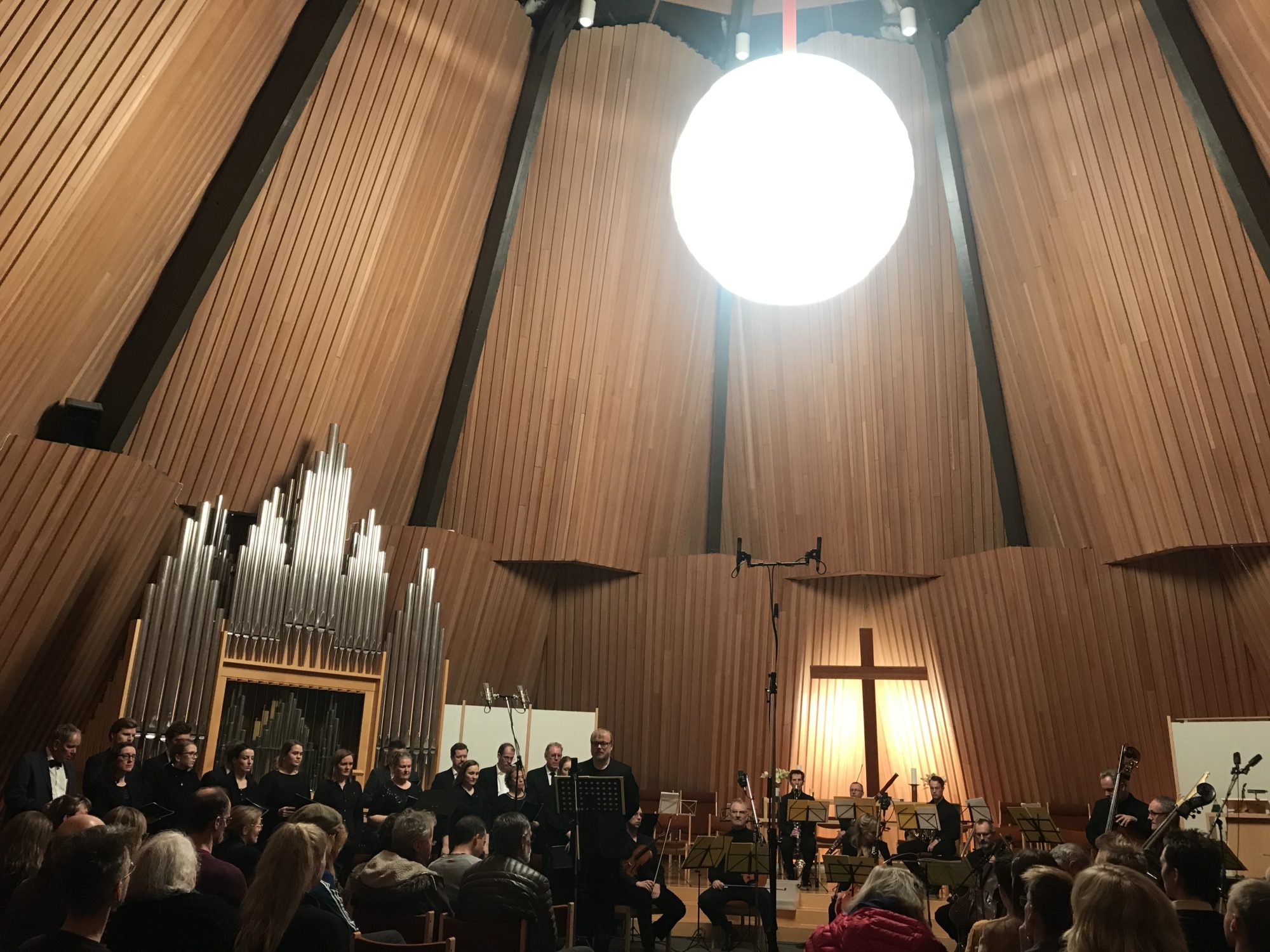 The festival holds a closing party at Idno, with branded cake and speeches. Clearly, behind the scenes, some of this whole shebang was held together with gaffer tape and will power. The honking birds outside sound drunk and relieved, too. Dark Music Days is an overwhelming buzz of a festival; clearly a major success here, both artistically and in audience numbers. Some of these shows are the most broad age-ranged music events I’ve been to since North Gate Jazz Club in Chiangmai, three years ago. But I am surprised how few international travellers showed up. Whether put off by cost, or by a misplaced sense of how cold Iceland may be in winter (nothing like the urban harshness of New York City, for example), they’re missing a treat. More than any city-wide festival I’ve been to, Dark Music Days deserves a bigger international crowd of literate ears and critical conversation, to show up and reap the rewards.

All words by Chris T-T.