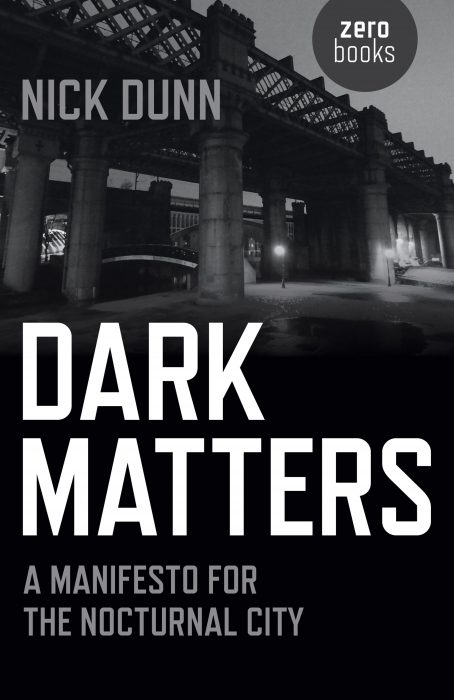 Nick Dunn used to sing with a great long lost Manchester band called The Obsession. He is now a professor and one of those academics who is thought provoking and impassioned and capable of great lines of thought that jolt you wide awake. His Dark Matters book is an adventure into the heart of the city at night – the time when the true nature of the beast reveals itself.

Professor Nick Dunn is Chair of Urban Design and Executive Director of ImaginationLancaster, an open and exploratory design research lab, at Lancaster University. He lives and walks in Manchester.

Dark Matters: A Manifesto for the Nocturnal City by Nick Dunn is published by Zero Books. https://www.zero-books.net/books/dark-matters

Read the extract below

The attitudes that beset so many of us regarding the night are borne of long-held beliefs, the origin of which demonstrates how little we still know and understand about the nighttime. Rooted in medieval practices, superstitions and fears, the contemporary hex of the city and its environs is most likely to be a very visceral but unlucky encounter with a pack of sport-branded classics rather than the invasive and shadowy hauntings of imaginary spectres and grisly halflings. This is the very essence of our worries, some of our deepest and, literally, darkest thoughts.
What is out there? Those noises, so readily dismissed in daylight hours suddenly take on an entirely different timbre. The easily understood and rationalized becomes jumbled and disorientating as the crepuscular fabric of night stitches us in space and time to something altogether more worrisome.

Urban areas are pathological. The nocturnal dowser can summon these neuroses effortlessly; such is the power upon our subconscious of nightfall and the city’s shadows. Our fears reside in there. Of course, contemporary depictions do little to assure us that the nighttime city isn’t full of the terminally sad, bad or mad.
News bulletins and headlines aggregate and skew the ‘night,‘ further exacerbating its otherworldliness. The crepuscular fabric of cities have featured in many film narratives, even providing the dominant character in films such as Mike Leigh’s Naked (1993), Stephen Frears’ Dirty Pretty Things (2002) or the fragmented interface between the CCTV scanscape and niches of impropriety depicted in Andrea Arnold’s Red Road (2006). The sclerotic set of conditions presented in each of these three films depicts a raw portrait of the world, bleak urban landscapes of rejection, exploitation and violence. Spatial interstices and latent networks, away from primary routes of circulation, enable the protagonists in the films to occupy niches within the city, but only ever as fragmentary and temporary habitats since with negligible comfort they are always surreptitiously urged onwards. A common theme across the three works is the subsumption of the characters by their immediate surroundings that serves to intensify the direct correlation between the materiality of the city and themselves; the effects of weathering and neglect present in both the built fabric and the psyche. Social and seemingly everyday experiences within fictional narratives, whether filmic, musical or written, cannot but feed our imagination.

Shabby and shadowy carbuncular pockets of the city are brought vividly to mind as we recall the drama of such stories unfolding before us, a phantom overlay onto real place. Nor do we have to see such events for them to resonate deeply within us. The ghosts of the city reverberate as industrial murmurs and metallic beats throughout LoneLady’s most recent and sublime album, Hinterland. Inspired by her home city of
Manchester, she constructs a post-industrial landscape of the mind wherein ideas have been ravaged by decay and decomposition, exposure to the elements and neglect. Yet, within these processes there is revitalization and replenishment. It is the very sense of abandonment and dereliction that enables explorations of the mental ruins and imperative to return to them repeatedly. There is recuperation within the broken and composition within the fragments. This is essential listening for the collapsing dreams of the twenty-first-century city. The cranking, motorik rhythms echo around as her voice maps out the landscape’s niches and wastelands. The craving for sanctuary and the need to find oneself through exploration of the liminal zones of the postindustrial city is woven through the fabric of the sounds, textures and tenderness of her songs. This is a love letter to a disappearing landscape.

Composting cities and the need to enable things to fail, perish and be redeveloped does not dovetail with unrestrained logics of late capitalism. Instead, empty sites that could support nonpermanent, creative and social uses are simply bordered off, surgically removed from existence by perimeter fences, surveillance technology and the warnings of 24-hour call-and-response. Consequently, the most frequent re-use and temporary occupation of urban spaces is as open-air car parks. This unimaginative and quick-fix intervention – often little more than a machine, some draconian threats wrought on signs and, sometimes, perimeter fencing – furthers our detachment from the city. It reinforces the notion that everything is to be consumed and space has a price. But what is the actual cost? One of the most difficult problems in trying to unravel this sort of development is being able to identify values beyond direct economic ones. Health, wellbeing, culture, nature, social relations are essential to us. Yet they are so often overlooked. Attempts to ascribe monetary value to these aspects have struggled to gain traction so far as the pervasive rapidity of the market is always able to twist and turn faster in response to any claims made against it.

If such spaces are out of bounds legally, the appropriation and illicit claims made upon them remain part of an ongoing tragi-comedy rather than Jane Jacobs’ gentle ballet of the street (1961). As for officially sanctioned strips of the city: the pavement and the pedestrian are coerced in the daytime, bonded within a double helix of restriction and entitlement, motion channelled, smoothed and conditioned. But at night, the urban landscape’s delineation is smeared. Lines are dotted rather than forgone conclusions, the possibilities for smudging their bold and italicized strokes lies here. Walking at night repositions boundaries, inner and outer, renegotiating and rerouting them, a new layer of script swiftly erased with the sun.