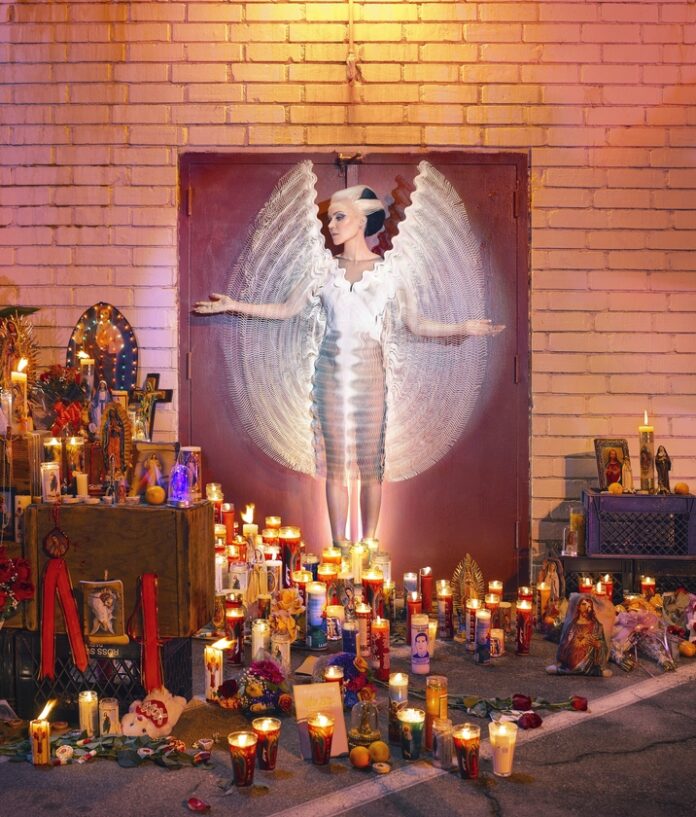 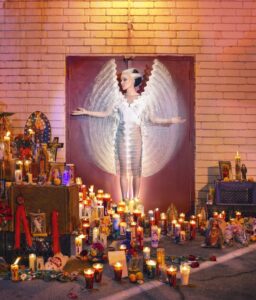 Friend of Bowie, millionaire heiress, high fashion icon and muse, her first album was produced by Tony Visconti concurrently with Blackstar. Encouraged by David she came to music later in life. Ged Babey agrees with the Times verdict: ‘Aristocratic glam fuelled by wit, character and a clear and abiding love of rock n roll’ and declares Daphne Guinesss to be Probably the Last Great Glam Rock Star.

I don’t want to hear about what the rich are doing… the truth is only known by guttersnipes.  Yeah, I know… I hereby betray every single punk-rock ethic I have ever held dear…  {Ged Babey is a self-styled Punk Writer..Ed}

Besides: There is nothing wrong with inherited wealth / if you melt the silver down yourself

I know I shouldn’t but I absolutely adore Daphne Guinness.  She is fabulous and probably the Last Great Glam Rock heroine – if only the audience for that kinda thing knew it.

She is like a fantasy-figure, superhero-sex-symbol made flesh:  Barbarella, Cleopatra, Boudicea and Monroe all-rolled-into-one, sent to finishing school and now finally ready to save us with her psychedelic chanson, intergalactic rock’n’roll and aristocratic disco.

I find her utterly fascinating and she has become my latest obsession. (Read her Wikipedia page and google the name, unless you know of her from Vogue, Tatler or the Society pages…)

Or just watch this, her first video from 2014, ‘directed by acclaimed image-maker David LaChapelle’. Extravagant, decadent and spectacularly ludicrous but… the song will get lodged in your brain.

So why does an incredibly wealthy middle-aged woman, a ‘socialite and fashion designer’ want to be a pop/rock star?

For the same reason as a young person with nothing does: rock’n’roll is escape-ism and the single most accessible, universal and important art-form we have.

Bowie will be as revered as Shakespeare, Dickens and Dali in hundreds of years time … or for as long as civilisation lasts.

Daphne Guinness isn’t making music for fame or money, she is already ‘one of the worlds best-dressed-women’, a ‘muse’, and an icon. She is ‘the Honourable’, her father a hereditary baron and descendent of Arthur Guinness the brewer who made the black stuff.

It’s no fault of her own that she hasn’t paid-her-dues or suffered-in-penury-for-her-art and these videos and others convinced me that her music is more than a vanity project:  2011, 2014, 2018 .

A young Daphne trained professionally as a Lieder singer, gaining a place to study at the Guildhall School of music before life for her took a left turn towards marriage and raising her children…

Her two previous albums are: 2016 debut ‘Optimist in Black’ – a bruised, Sixties-influenced affair and 2018 follow up ‘Daphne & The Golden Chord’ which saw Marc Bolan-obsessive Guinness and Visconti tip their cap in the direction of 70s Glam, assembling a band featuring members of Go-Kart Mozart and Roxy Music.

The music is flawless, they are peculiarly brilliant albums – Visconti’s arrangements floor you and Daphne is like an extraterrestrial Joanna Lumley playing Nico, with a cut-glass English accent and perfect poise. The songs are vivid, lush and phantasmagorical.  OK, at times they do descend into parody and cliche, presumably because no one had the backbone to say ‘no’ to Daffers.

The default setting is a kind of Grace Jones fronting Goldfrapp and some of the lyricism is overwrought.  But for every song which misses the target there is one which is classy, tongue in cheek and works . This one particularly makes the grade as a Visconti /Guinness classic.

Two things made me decide to trash my punk credibility and want to write about this new album: The last band I saw before Covid lockdown was Holy Holy (Visconti, Woody Woodmansey, Glenn Gregory…) who I didn’t think I would enjoy, but were exceptional: polished and utterly sublime.

Around the same time I learned of the death of an old friend. A beautiful woman who’s style icon was Audrey Hepburn. Immaculate and fragile, she hid her addiction for years until the demons caught up with her. They played ‘Dancing Queen’ at her funeral which I watched online.  She had the same cheekbones and features as Daphne I realised later – and she would’ve loved Revelations, which is Guinness’s ‘disco album’.

Couched in Visconti’s lush orchestrations, and for which Daphne cites both Gainsbourg’s ‘L’Histoire de Melody Nelson’ & J.S. Bach as inspirations – the album explores a French-flavoured disco sound, the band slipping into their white Repetto shoes to capture the nonchalant grooves of mid 70’s Gainsbourg, sprinkled with the dance floor decadence of Studio 54.

Looking Glass is new wave disco with elocution-lesson diction and a Nico does French disco vibe.

The lyrics of ‘Looking Glass’ – with Visconti’s velvet strings rubbing up against post punk guitars – probe the distorted filter of lives led out predominantly online; as Daphne puts it “A futuristic Alice In Wonderland scenario. Caught in a world which is like a twisted hall of mirrors – smart phones, tablets, laptops.”

The three-part video is another LaChapelle work of art… there is a wonderful piece here where Daphne talks about them.

Hallucinations is the gleaming centrepiece of Revelations. It sounds more like something from the ‘Golden Chord’ album, which I do prefer to this disco LP.  The guitar figure is to die for and the strings stunning, and it is Daphne best vocal performance.

At the album’s halfway point, ‘Blow Up’ counsels in emphatic terms against the dehumanising facets of “Being mesmerised by devices to the point of distraction” – bleeps blending with arcing guitar lines build into an outro with Daphne’s vocals built out of snippets of Morse code.

If, like me, you remember Sarah Nixey and Black Box Recorder with affection, then songs have a similar appeal…

Ziggy’s shadow is cast long across the New Wave zap of ‘Bright White Stranger’. “Bowie was a huge influence on me” says Guinness; “He mentored and encouraged me to pursue music. It was him that introduced me to Tony – the Bright White Stranger is his continual spiritual presence”.

Revelations is an album which appears to take itself very seriously, but can be thoroughly enjoyed as a beautiful time-warped anomaly in 2020’s decimated pop cultural landscape.

Guinness is so stylish and other-worldly – an art-school posh-bird in a massive gilded-cage, aware of her privilege and cossetted life,  a philanthropist and patron of the art of fashion, she deserves the creative joy of making music like any artist. (Yeah, all my ‘Eat the Rich’ tendencies successfully suppressed… ‘class war never changed history’ sang Vic Godard after all).

I would love to see Daphne working with other musicians outside of the Bowie circle. Like Nico she could perhaps employ the Blue Orchids as her backing band -their magical psychedelic garage is at its best and co-writing with Martin Bramah would be quite something.

What would be great too is if Daphne took on a role like Warhol with the Velvets: patronage of fabulous new uncompromising artists. Someone like  Jemma Freeman & the Cosmic Something because the updated 21st Century Glam vibe is already there.

The chance to interview Daphne Guinness fell through due to the album being postponed due to the pandemic, and I was a bit relieved (Yes, I am intimidated by wealth and beauty…) It seemed strange that she would want to talk to what is at its heart an online ‘punk fanzine’.(Sorry John).  Maybe she wants to find out if the truth really IS only known by guttersnipes?

Cynics might unjustifiably dismiss her as a Rock’n’Roll Lady Penelope trying to be Lady GaGa, but fuck ’em.  Daphne Guinness is majestically cool, a one off, and probably the Last Great Glam Rock Star we have.

Revelations is aristo-disco fun, but Optimist in Black and Daphne & The Golden Chord were the real revelations to me.

Buy Revelations from one of these places.