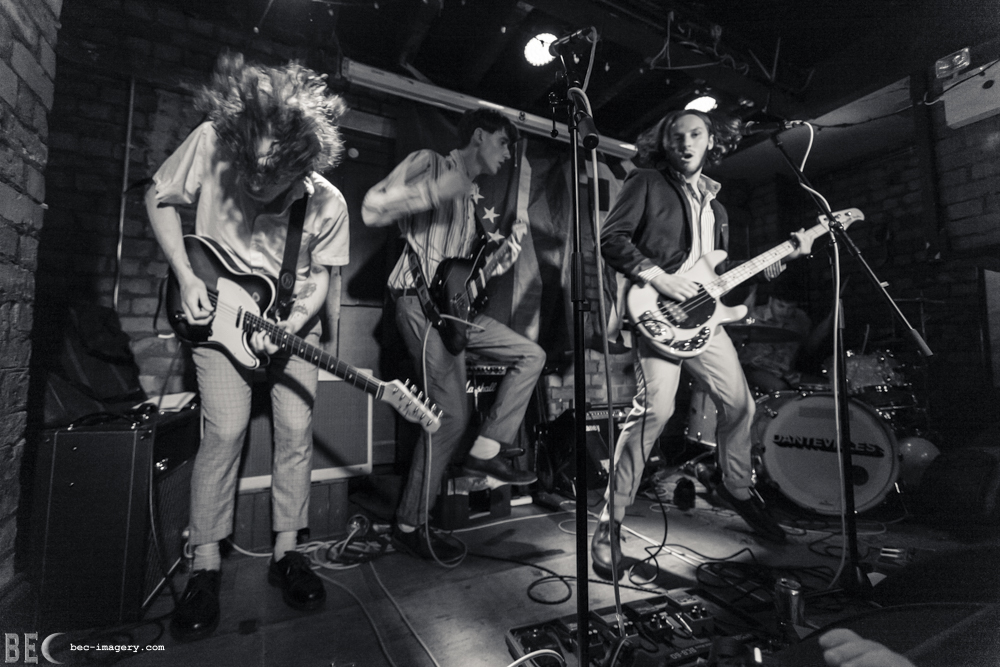 The Dantevilles brought the party to The Eagle Inn, launching their new EP, Welcome To The Theatre, with excellent support from Palava and Octopus. Roxy Gillespie relished the carnival atmosphere at this unforgettable gig.

The Eagle Inn is a little gem of a venue, tucked away at the Manchester edge of Salford. It has an intimate gig space and plenty of room to drink in the relaxed vibe after the music is over. Sadly, train cancellations meant missing most of a lively set by Palava. The last two songs were quality indie rock  – The Next Room and Unwanted had both energy and interesting lyrics, making for a great start to the evening.

Things took a dreamy turn when Octopus began their unique, trippy set. Mellow and melodic, they had a beautifully off-kilter sound. The set included their recent single Happy Today, which had hints of the Beach Boys in the shared vocals. Calypso and the last song Breathe immersed the crowd in alternative psychedelic sound. Distinctive and impressively otherworldly, Octopus are definitely ones to watch.

Balloons, a strikingly grotesque jester and plenty of silver confetti added to the party atmosphere as Dantevilles hit the stage. They have a high-octane stage presence, constantly bouncing around stage to the rhythm. The opening perfection of Confession had stunning vocals and sublime guitars from Jamie Gallagher and Paul Tanton.

The hard-core fans let their love of the music shine through from the outset. As Dantevilles truly got their funk on with Fool For You and the top quality Perfect Place, they went wild. With complimentary dual vocals from  Jamie Gallagher and Connor McNicholas soaring across the crowd and everything held together superbly by Alex Panidis’ drumming, the set was really on a different level.

Flavour Of The Month showcased McNicholas’ crystal clear vocals and lashings of laid-back indie-funk. The Fighter had the total feel of summer; a real high. By the time McNicholas came into the audience facing the rest of the band, the atmosphere was electric. Save Me A Dance and All Sex Is The Same continued the revelry, the crowd all in on the act, dancing and generally having the best time.

The amazing Soundscape from the EP is an epic track and was a highlight of the show. The air of Victorian circus and the music and vocals were outstanding. Then, Mr Punch the Jester joined the band on stage for Bloomin’ Flowers. The song with guitars and drums made in heaven sent the crowd into dance frenzy.

It was obvious that Dantevilles weren’t going to be allowed off stage easily. Responding to shouts of ‘One more song’, the band went into a huddle and came up with an oldie, It Might Be Tomorrow, which went some way towards satisfying the crowd. To be honest, they probably would have been happy for the band to play all night.

The post gig socialising continued in the welcoming environs of The Eagle long after the music finished. The set had left everyone on a high. With modern life seeming increasingly difficult, it was a welcome tonic. The world might be a dark place at the moment, but at least we have Dantevilles to spread a bit of warmth.

All photographs by B.E.C. Imagery. See more of her work on her Facebook page.