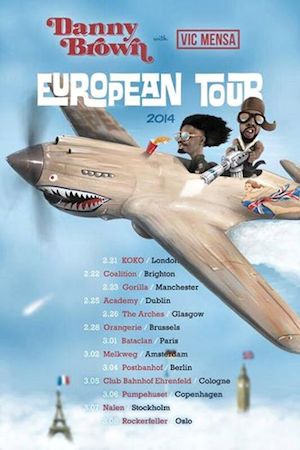 A definition of punk? Michael Bennett sees Danny Brown in Manchester and reckons he’s found it.

How does one define punk? Not punk rock, though there are plenty of three chord wonders old enough to know better staggering through Chron – Gen covers, misty eyed about Crass in the old days… It’s more of an idea of punk, of the outsider breaking in, standing against the old guard and the obvious. Not trying to impress, but impressive anyway.

Danny Brown, despite being a rapper, is different enough to matter, to notice, and he’s more punk than almost anybody working.

First onstage was Vic Mensa, a rapper from Chicago whose free download CD Innanetape, has done very good business. Vic bounded onstage like a drunken puppy, and pretty much maintained that level for the half hour he was on stage. Never allowing the set to flag, the audience loves it.  He’s got charm and style, but is only ever going to be the warm-up act for the main man himself.

Danny Brown is a cartoon. A cartoon that grew up mean and confused, so you never know which way he’s going to go. A mess of hair and busted teeth, his songs have more in common with Throbbing Gristle and dubstep than they do with club hiphop or R’n’B. He walks on the tiny stage and the place goes ballistic, a hero’s homecoming and the music – borne out of industry – moves itself; motorised, mechanical, the walls dripping sweat with the heat.

Whether it’s Smokin’ and Drinkin’ or 25 Bucks the new songs sound monolithic, the sub bass so loud I nearly threw up with joy. He has a huge grin on his face the whole time, seemingly surprised that the very white, very hip crowd know every word to every song. He has an attitude and clothing style, similar to Lydon, that suggests he cares, but mostly only about what he thinks. There is no concession to any sort of compromise or conformity – only beautifully violent, and very loud, music to give you joy and to make you think.

And you can’t get more punk rock than that.

All words by Michael Bennett. Find his Louder Than War archive here.