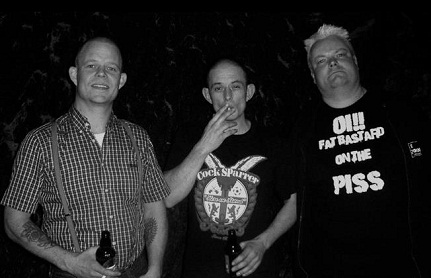 They have opened for RANCID and SPARRER at the LONDON Forum) have got a new album out soon. ‘As True As It Gets’ was mixed by TUE MADSEN, who produced and mixed the last 3 SICK OF IT ALL albums, THE HAUNTED, BORN FROM PAIN, yes even ROB HALFORD and a lot of other stuff – and has delivered a tight and tough album of street punk.

The band will be touring the UK in June.

6. June : The Flag, Watford (set up by: Watford Punk Collective).

and then back in August, when they will be the first Danish band ever to play THE REBELLION FESTIVAL in Blackpool!!!

TOP 10 Oi! / STREETPUNK ALBUMS
I´m not too sure about the order, it might differ a bit from day to day and I’m might have forgotten an album or a band………. For that I apologies!! BUT I sure as hell know that these bands are some of the greatest and most important in the scene from my point of view and are some of the bands that have influenced and inspired me the most:

This must be “THE” classic streetpunk album. Every song on it is a hit!! Every time I have seen Sparrer live an instant party kicks off. Everyone is singing along to every word of every song. Sparrer means so much to most people in the Oi! – streetpunk scene and they deeply deserve all the success and respect that they have got! We had the privilege and honour to be invited over to open for them and RANCID, at their 40 years birthday bash in London……………. and it don´t get, better than this!!