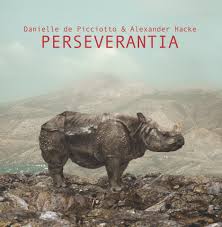 American-born, German expat artist and musician Danielle de Picciotto is the co-founder of Berlin’s Love Parade and the wife and longtime collaborator of Alexander Hacke, bassist for Einsturzende Neubauten. The partners in crime of the left field underground have been touring the world and creating an interesting series of art projects and releases that has culminated in this thrillingly dark work.

From the opening Love Foundation the album is a fully immersive work that combines brooding drones with neo soundtrack and eclectic instrumentation into a huge all consuming soundscape that is utterly hypnotic. The opener  really sets the stall – drenched in feedback – it’s one of those hypnotic drone things that in the right hands are so captivating – a perfect wall of beautiful noise that sweeps you away, a tsunami of feedback and spectral sound and it sets the tone for an album that has that between a rock and a hard place – and that’s our kind of place – of the dark end of days of Earth. This is that total meditative ooze of sound of bands like Earth and the chiming darkness of Ohm or any of the outer outfits who are existing in deep space far away from the 12 bar shackles of ye olde rock.

Of course we would not expect less – Danielle de Picciotto and Alexander Hacke have a combined CV that weighs 60 tons. Alexander is the loyal lieutenant  in Einstuzende Neubauten – their bass player and producer who has been making sonic sense of that outfit’s genius visit since he joined as a teenage tearaway back in the days when Berlin still had a wall. Danielle grew up in the New York post no wave meltdown and relocated to Berlin where she brainstormed the Love Parade whilst still operating in the art underground. When the pair of them fell together sparks were gonna fly and they certainly did with them travelling the world like some kinda high decibel Bonnie and Cyde – releasing a series of records and playing esoteric concerts and living out of suitcases and on their wits.

There have been releases from them before but nothing like this – this takes them into the triple AAA premier league of the 21st century music underground – that kind of rolling epic darkness currently occupied by Swans and pioneered by Neubaten themselves – there is plenty of doleful, dark, rolling slow dark drones and metal percussion, there is tribal drums, dreamlike vocals, slowed down growling poems, oozing guitar feedback and this all pervading atmosphere.  There is the Indian classical percussion of the title track and its dark black yoga vocals and Aghori skull vocal drones, and that heart of darkness, dark matter trip that is so perfect for these times.

This is a beautiful and thrilling record. A record to get lost in and a totally immersive 21st century psychedelic experience of drones and dark atmospherics that sums up the persistence and steadfastness of its title.