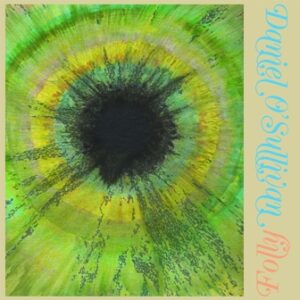 Folly is the second album by Daniel O’Sullivan (Grumbling Fur, Ulver) under his own name. Written about the time of the birth of his son and the passing of his friend Ian Johnstone, Folly is the work of an artist making sense of those two significant life events. Simon Tucker reviews.

The time of the male singer-songwriter has been and gone. Swamped by plodding masculinity and tired tropes it had become the sole concern of pub-bloke bores and buskers. Those brothers Gallagher who still hold so much sway over the minds of many young men are still out there of course with one retreating back to his basic meat and veg guitar anthems and the other going Slade-on-disco and including someone playing the scissors (admittedly this last fact is quite interesting). HOWEVER…..

Look around and you will see that the field of male singer-songwriters is now littered with interesting artists twisting the form and creating a new language with it. Artists such as Ezra Furman, Bill Ryder-Jones, Euros Childs and John Grant are taking from the history of pop music and adding a modern twist, stripping it of its tedium and imagining a world where Wild Wood was not used as a map for the future. In the middle of this clutch of progressives we find Daniel O’Sullivan.

O’Sullivan is known for his work in the fields of experimental music with Grumbling Fur and Ulver to name but he has ventured into “solo” arena before with the acclaimed 2017 album VELD and now we get its follow up in the shape of Folly. Recorded and mixed in Wales by Thighpaulsandra (Coil, Julian Cope Band, Spiritualized) Folly was written around the time that O’Sullivan’s son was born and his friend Ian Johnstone passed away. With this knowledge it is easy to see the thematic threads of Folly and its creators intentions as littered throughout there are couplets describing birth and metamorphosis. The duality of life and death and the human condition is what holds Folly together but you will have to dig closer to find the specifics as O’Sullivan’s lucid half-spoken (with moments of pure lift off) lyrics and Thighpaulsandra’s production create a dreamscape that blurs edges and births shadows. This technique allows for dynamic moments to appear throughout Folly like when the words “Can a mothers’ hand hold on too tightly?” suddenly pop out on Time Elapsing Blue or when you’re pleasingly surprised by the sudden switch into the traditional with piano led The Diamond Vehicle which opens with “When you and I awake / and not a second late / for you and I conduct the way we ride this wave..”An opening set of words that bring home the joyous feeling of waking up and the first thing you see being your newborn child.

Folly is an album full of warmth and lush experimentation which makes it a work that whilst thematically grounded in the classic birth / death conflict adds an otherworldly feel which allows it to exist in its own universe. The mixing and production by Thighpaulsandra is perfection allowing the breadth of scope which is O’Sullivan’s vision to come to life in a vivid way. Every instrument appears exactly when it should and every element is allowed its moment in the sun.

There is a classicism to O’Sullivan’s writing that allows Folly to show moments of influence without being bogged down under the weight of history. This influence appears scattered throughout with Honour Wave being an heir apparent to the Eno of Another Green World or the Doves skittering take on anthem textures of Penny Rag. What is wonderful about these moments is they help a listener lock onto things they know and are comfortable with which in turn makes it even better when O’Sullivan throws in the more experimental side of his nature like the spine tingling moment on Rattleman where the rug gets pulled out from under your feet by O’Sullivan who suddenly shifts tempo and style halfway through the song, creating a piece of music that actually conveys a sense of grace and danger akin to a Rattlesnake itself.

Daniel O’Sullivan has in Folly created an album that belongs in the pantheon of celebrated adult pop. If this album was released thirty years ago it would be lauded by every corner of the music press and just because the times have changed it shouldn’t mean peoples reactions should as well. Folly belongs at the table with your Hunky Dory and your Rubber Soul, your Harvest and your Blue. It is a supremely well crafted, well recorded and well executed batch of songs that is an absolute joy to listen to.