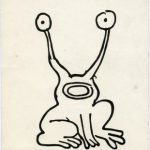 We here at Louder Than War have a soft spot for Daniel Johnston, as, we imagine, does everyone who knows (of) the man. Indeed, just a couple of days ago we put the stream of his new album on our Tumblr blog. Now here’s a review of a recent gig by him, one of his typically intimate shows.

I’ve written about this artist before within these precinct walls, and due to his mental health issues, I didn’t think I’d ever get to see him live. A friend- fellow Brighton fan and music addict- whom had also ‘blogged’ about Daniel, then contacted me to tell me that Daniel was playing in Brighton, and indeed had bought me a ticket- chuffed? You bet ya!

I didn’t know much about st. Bartholomew’s Church- other than its impressive brick exterior (tallest steeple/spireless church in England, I believe) which dominates the local area and is pretty stark, rumoured to be built to the dimensions of the Ark- it is not a beautiful building, but pretty awesome (in it’s proper non-American meaning).

I also hadn’t realised that it was still a functioning Church, so having Daniel Johnston there, with his inner battles with Satan, gave the night an extra edge.

Walking past the Church to get a pre-gig beer, I was surprised at the queue already forming- as I’m used to venues filling quite slowly these days, even to the point of people not being particularly worried about missing the support acts- a practice I’ve never quite understood. When I came out of the pub, with Lee and his 12yr old son (first gig for him- great way to start a life of gigging), not much later, the queue had almost reached us!

Then it dawned on me- it’s in a Church, Churches have pews, people will be filling from the front, darn!

Not to worry, some of the lovely people I would meet tonight through Lee had reserved some seats, third row- excellent.

Inside the Church was pretty impressive too- such a big space, and had me thinking how the well known fragility of Daniel would deal with this.

Support came from Brighton based British Sea Power performing an acoustic set. I’ve never really had anything to do with BSP, not for any particular reason either, I had recently read about their Krankenhaus nights in Brighton, which feature a very varied rota- table tennis tables, bearded ladies, readings- that kind of thing, and their involvement here, and willingness to try any break moulds, has me interested in them.

So, I didn’t recognise what they played, but it was all very pleasant, none-the-less. They played for 30mins or so and left the stage.

After a Tea and Biscuit interval, Daniel wandered onto the stage. With his grey jogging bottoms, grey jumper and coat- he fitted the image of anti-star I thought he would. There were half a dozen or so bottles of water on the table next to him, they remained untouched as he kept cracking open the Coke cans.

He had a tiny electric guitar, looking fairly ridiculous next to his large frame, he flicked through his songbook and began.

The opening track ‘Lost In My Infinite Memory’ sets the general tone of Daniel’s work- it’s lo-fi, and with it’s lyrics of ‘I love you all, but hate myself’ delivered without any angst or irony, it’s not the nihilistic ‘fuck you’ of angry youth, but the very sad result of many inner battles. Daniel is brutally honest, there is such a warmth toward him from the audience, he obviously knows love and beauty, but doesn’t see it within himself. I’d read a review that live he walks a tightrope between genius and freak show- I saw none of this tightrope here, I saw genius. With both hands involved in his guitar playing (he plays in a unique way, he has a very urgent, clipped strumming style, he plays chords, and sometimes re-positioning his fingers- interrupts the flow. It adds to the Daniel Johnston Experience) his documented ‘shakes’ are not too apparent. And, indeed, he seems more together than I was led to believe, although he clearly isn’t entirely comfortable (I don’t think he ever looked AT the audience).

This short solo set lasted a few songs before he walked off stage- there are no ‘Star’ tendencies at all with Daniel- he walks on and off stage as if there is no one there, and he’s just going about his normal day.

BSP return for the second Johnston Set- now renamed Texan Sea Power (Johnston is from Texas),
Johnston walks back on stage to more warm applause, and starts with one of my favourites ‘Don’t Let The Sun Go Down On Your Grievances’. With the band behind him, he shows more confidence, although, now not occupied with guitar playing, his hands are shaking, fairly uncontrollably it seems. But he is definitely having fun now.

“What do you want to hear?”Â, he asks
“Speeding Motorcycle!”Â comes the reply from the band.
“Very good”Â exclaims Daniel- the obviously pre-arranged banter working, but the effect was humorous, not stilted.

A sing-a-long was introduced- “it’s short, but, join in if you want”Â says the ever more confident singer, and launched, without accompaniment, into ‘Funeral Home’:

“there you go”Â he says at the end. The audience responded with laughter, and Daniel seemed pleased with his comedic efforts.

He threw in a Beatles cover- Lennon’s “You’ve Got To Hide Your Love way”Â from Help!, a few more tracks I didn’t know, which I will investigate, the brilliant “Walking The Cow”Â of the ‘Hi! How Are You?’ album, and of course the wonderful “Casper The Friendly Ghost”Â.

Back to the hand shaking- when he removed the mic from the stand (bopping himself on the chin in the process, almost predictably), he proceeded to sing with the mic between both hands, but the main impression I got was that of an effect- with the mic rapidly moving to and fro infront of his mouth, I was reminded of Gibby Hayes from Butthole Surfers on “Hurdy Gurdy Man”Â, a kind of vibrato(?) effect, and gave his voice a different feel.

There was also something special about Daniel singing in a church, under a crucifix, the words “Rock and roll saved my soul”Â, although, fittingly, he didn’t sing any of his religious or Satan tunes.

Off he walked again- only to return, fumble through his books, before closing them and saying “I should know this one by now”Â, and finished with the beautiful “True Love Will Find You In The End”Â.

Off he walked for the final time to much applause, and it was over.

I was very impressed with the performance, and felt touched by a genius at work.

Much of his early output was recorded at home on a cheap mono cassette deck, and so very lo-fi, hearing these tunes performed with a band, especially with the acoustics in the church, gave them a whole new lease of life- and wonder if he would ever re-visit the tunes and re-record them in a studio.

Or would that destroy something rather unique?

All words by Guarin Tees whose blog, Precinct of Sound, you can find here