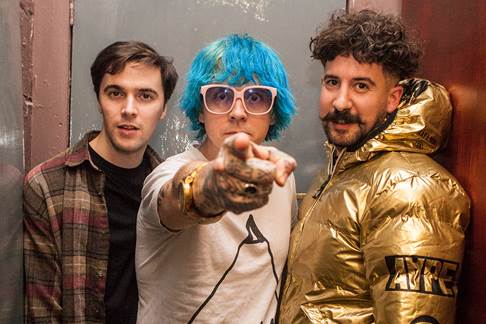 Louder Than War premier the new video from post-punk / shoegaze trio Dancehall who are gearing up for the release of their debut LP.

‘Droners’ is the new single from acclaimed trio Dancehall who, with their mix of shoegaze fuzz and post-punk drive, have been garnering praise since they released two singles in 2017. ‘Droners’ is so named due to the fact the song was created with a single guitar note which was treated tape delays still using the bands three-take self imposed rules.

Lyrically the song focuses on what lead singer Tim (ex-Kill Kenada) describes as “the torture of being in love and all the fear, self-doubt and anxiety one goes through on the journey of companionship, lust, passion and the uncertainty when you place your life in the hands of another”.

‘Droners’ is a marked swerve from the bands previous singles and whilst the overall effect is more dreamscape in feel it still retains the gnarly bite that has helped gain the band such positive praise.