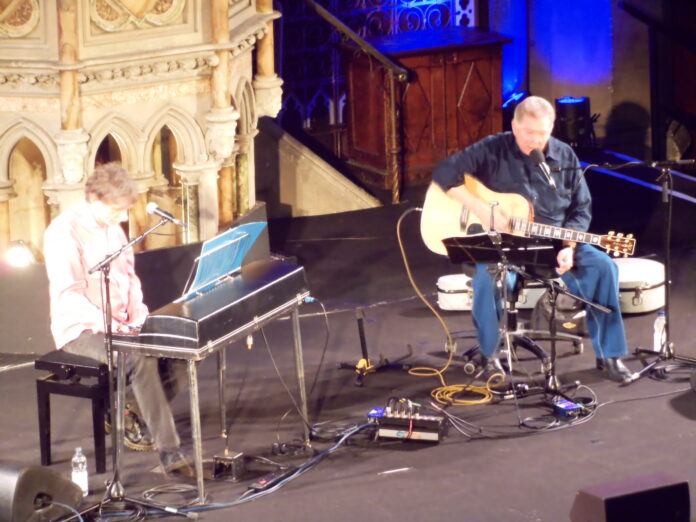 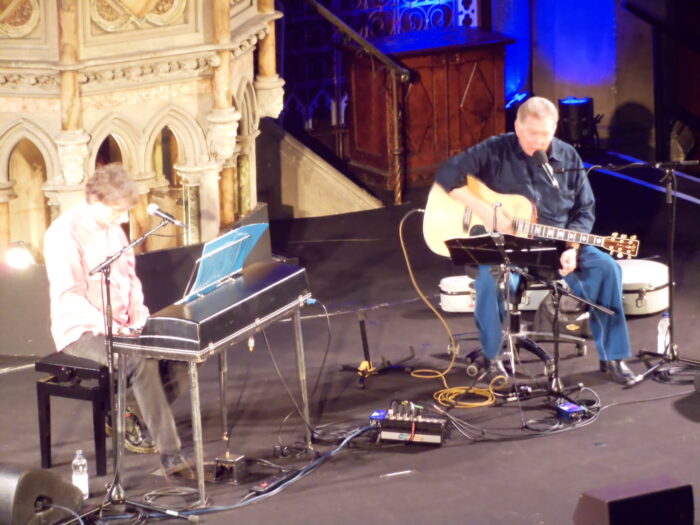 The legendary Memphis songwriting duo make their return to London on the eve of the reissue of their live album Moments From This Theatre. Louder Than War’s Craig Chaligne reviews.

It had been a while I had been as excited as that by the prospect of attending a gig. Dan Penn and Spooner Oldham’s live album “Moments From This Theatre”, recorded in Dublin in 1998 while they were touring with Nick Lowe hasn’t been far from the turntable for the past year and I couldn’t wait to see the two US Soul songsmiths. It will  be reissued by Proper Music on the 31st of July as a two-fer with a Live DVD from a show recorded at St James Church in 2006 and a short UK was booked during July to promote it. They surprised some audience members by starting the gig at 10 to 8 which means quite a few folks missed the first couple of songs. Starting with “I’m Your Puppet”  a 1966 top ten US hit for James and Bobby Purify they followed with “Sweet Inspiration” originally recorded by the girl group of the same name in 1968. The church like atmosphere of Union Chapel was the perfect setting for the sparse arrangements and Penn’s fantastic voice. Penn’s simple but effective guitar playing was well complemented by Oldham’s equally tasteful touch on his Wurlitzer electric piano. For who has already heard “Moments From This Theatre” or seen them live, the setlist was pretty familiar but there was still some new songs thrown in with the inclusion of two numbers that were first released in 2012 on the excellent compilation “Dan Penn – The Fame Recordings”.  The jaunty “I Do” had its tempo slowed down and came out as wizened version of the original demo while “Take A Good Look” retained a feel similar to the original version.

Both of our hosts southern drawls were a bit hard to grasp from the top of Union Chapel but we were treated to some excellent back stories of the songs played during the evening. “You Left The Water Running” was introduced by Penn’s recollection of Otis Redding nailing the song on a first take late one night at Fame Studios.  A rendition of Penn’s first hit song “Is a Bluebird Blue” saw him thanking his wife (present in the audience) for keeping his feet on the ground after the song charted. Penn’s two masterpieces written in collaboration with Chips Moman : “The Dark End Of The Street” and “Do Right Woman, Do Right Man” got an airing. Both Penn and Oldham’s individual songwriting careers were showcased during the gig. Oldham sung “My Goodness”, the A-side of a one-off solo 45 issued in 1968 and “Lonely Women Make Good Lovers” that he co-wrote with Freddy Weller (“wish I had been in on that one” quipped Penn). Penn got to sing a few tracks from his 1973 album “Nobody’s Fool” and his 1994 masterpiece “Do Right Man” (including the excellent “Memphis Women and Chicken” that saw both men competing on who did the best chicken impression). Citing old age as a reason to avoid the rather lame ceremony of the encore, they finished the gig with a heart wrenching version of “Zero Willpower” and left the stage after a standing ovation.

For more on Spooner Oldham and Dan Penn you can check their official websites : www.spooneroldhammusic.com and www.danpenn.com and their page on Proper Record’s website.