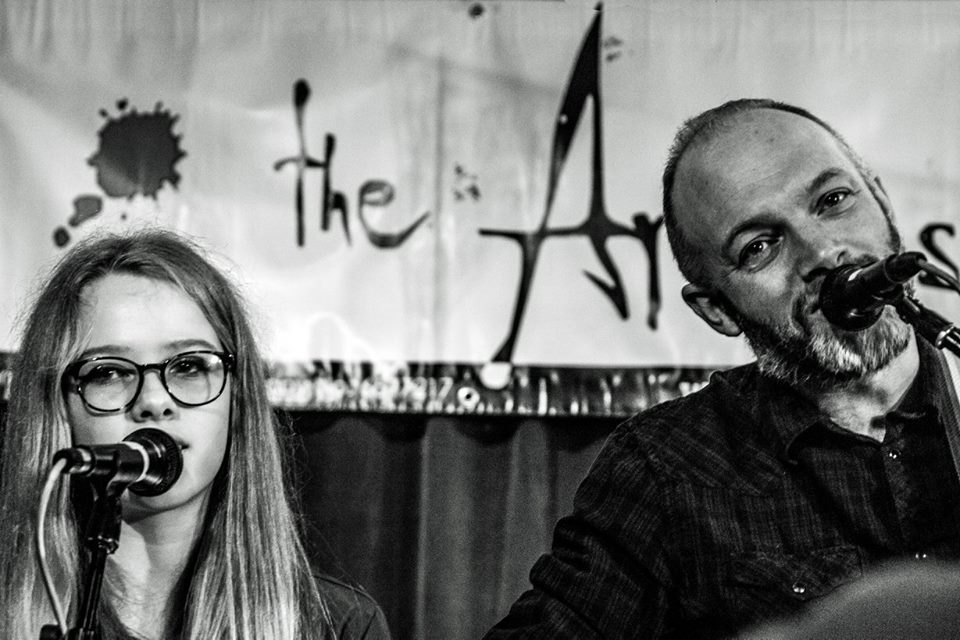 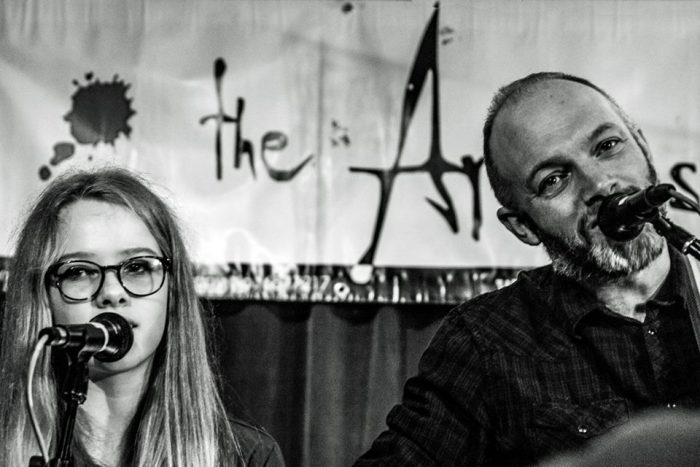 Following a ‘controversial’ LTW album review. eloquently replied to by Tom Robinson himself, he was invited to the album launch, but it probably got lost in his bulging mail-sack as he didn’t show.  He missed an emotional and near-perfect performance as Sue Blackwood reports.

Dan O’Farrell is an eloquent lyricist, whose words can pack an iron punch inside soft, leather gloves. His take on modern life, in its asinine variety, is laid out as a series of snapshots of the human condition, from the sharply perceptive viewpoint of a knowing, sometimes baffled, observer.

These are songs that quietly command attention in economically precise language and with nothing superfluous to requirement in their composition. The politics are passionate without being preachy, the reflections upon life’s lessons learned expressed with wry sensitivity and without mawkish sentimentality. Like all the best storytellers, Dan knows how to weave a good tale, consistently hitting his mark with a deftly engaging, razor sharp wit.

Until the end of last year, Dan fronted popular local band Accrington Stanley, formed when its members were still at school and who played and toured together over the next 30 years, finally deciding to play their final gig in December 2016. When the band you’ve grown up with suddenly is no more, it leaves a rather sizeable gap and the question of where to go next looms large.

In September 2016, Dan joined forces with former Accrington Stanley band member Chris Walsh (drums and percussion) and local double bass legend Rick Foot, to form The Difference Engine. From the outset, things happened very swiftly and with clear purpose. Their debut album was recorded live, within a month of the trio’s formation and after just two rehearsals, at Rob Sansome’s Factory Road Studios in Eastleigh. All songs (bar one) were sung live by Dan. They wanted to catch the same atmosphere of their first rehearsal, when Dan’s songs were suddenly given the dynamic and playful ‘oomph’ that he’d long been hearing in his head. Various friends were co-opted the same day to come and add flute and string parts to three of the songs. They describe the day as being one of “marvellous chaos”.

Having recently reviewed the album for ‘Rock Regeneration’ website  here, I was eagerly anticipating the live launch of an exciting collection of songs, which took place before a packed house at Southampton’s Art House Café – a tiny venue, which allowed for a cosy, intimate atmosphere. It turned out to be a performance of such sterling quality that I felt extremely lucky to have witnessed it.

Two support acts kicked off the night’s events: Calum Lintott and Lucy Kitchen. Calum is a young, solo indie performer with an engaging, laid back style. Having previously played with a full live band, he says he enjoyed getting out of his comfort zone and playing some acoustic in front of such an enthusiastic audience. The room loved him and the vibe was chilled and relaxed. 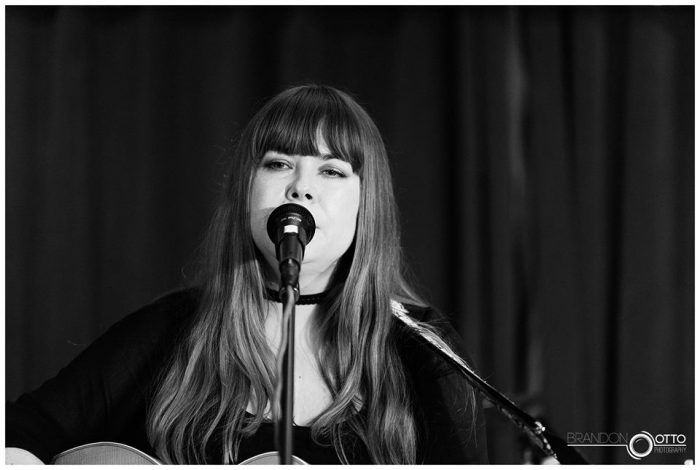 Lucy Kitchen was equally well received by an enthusiastic crowd, at least half of which appeared to be members of a loyal fan base. Her voice was rich and warm, with trace elements of both Sandy Denny and Eliza Carthy, within a compositional style that bore echoes of Nick Drake.. The room was held captive by her gentle, mesmerising folk-tinged songs of love and heartbreak.

When The Difference Engine took to the stage area, there seemed barely room for the musicians amongst the assorted instruments and equipment. Everyone who had played on the album was there to play live on the night – resulting in a sound that was no less than perfect.

The set opened with the trio performing a new song, ‘Death Rattles’, a sober reflection on becoming aware of the inevitability of one’s own mortality. They were then joined onstage by three members of the ‘Rosaline Strings’ section, Mary Hyde, Louise Owen and Philippa Baldwin, for “Problems Inherent Within Global Capitalism”. This is a mournful lament on the bald-faced lie of ‘trickle down’ economics and the basic disparity of wealth distribution that characterises one of Capitalism’s greatest broken promises – society’s wealth circulating amongst a small, self protecting few in the upper echelons, while greater numbers of homeless people subsist on food banks in poverty. The song ends on a note of quiet plea for change – a shift in perspective. The timpani and two violins lend the song a slightly eerie, melodic lilt, played to truly stirring effect in this live performance. 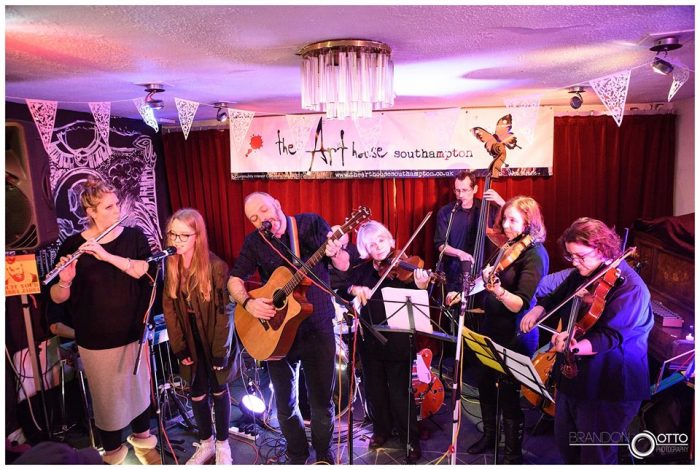 The ruefully sad ‘Broken By Love’ is accompanied by Rufus Grig (Cellist & guitarist with Accrington Stanley) on glockenspiel and Mike Davies on the intriguing sounding pedal steel, which he also played on ‘Anhedonia’, ‘Why I Don’t Do Covers’, ‘Your Facebook Feed is Not The World’, and the second new track of the album, ‘Easterly’. The pedal steel was joined by the Rosaline Strings section and Rufus for love song with a difference, ‘Light in Your Darkness’ and the beautiful “Rosaline Wins”, an alternative perspective on Shakespeare’s tragedy of the teenage ‘Star Cross’d Lovers’. Nancy Tomkins on flute gave the melody a lovely Renaissance sound.

Dan’s daughter Ruby sang a lovely choral accompaniment on this song, which had apparently come about by happenstance at the recording stage and worked to perfection. This song built to a rousing crescendo at its finale, Dan’s “proud Dad” face, as he sang alongside his daughter providing a touching moment.

The sound quality was exceptionally good on all of the songs, to the same high standard as on the cd. What came shining through, in particular, was how extremely happy everybody clearly felt to be up there performing their songs before a live audience. Dan, Rick and Chris all had beaming grins across their faces for the entire performance.

They truly rocked out, delivering every song with gusto and passion and a little something else – the X factor that gave the night a truly magical atmosphere. Something has definitely gone right here, which Dan describes thus: “The stars aligned and everything fell into place…I feel really at home with these guys. They got my back”.

All words by Sue Blackwood whose author profile is here.

Sues review of the Difference Engine album is here on the excellent Rock Regeneration website.