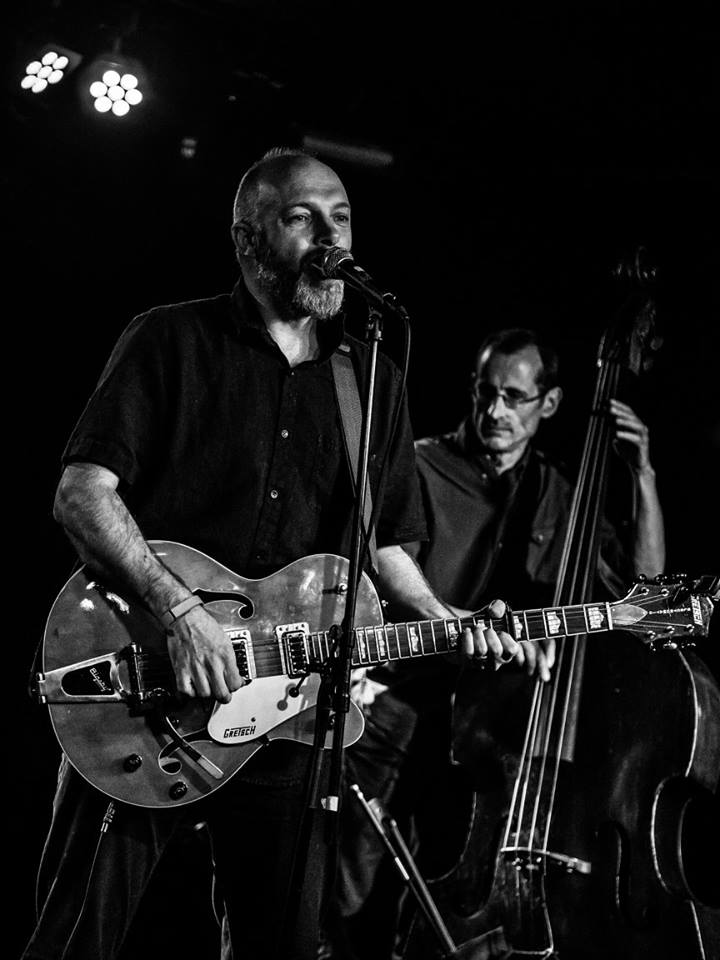 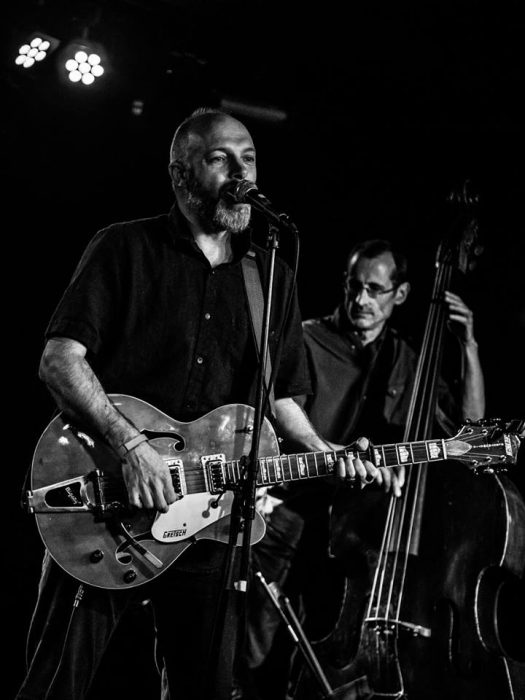 Henry Baroche makes his Louder Than War debut with an idiosyncratically swelegant review of a great night at the ‘Heads.

The first time I ever saw The Talking Heads, Southampton, was from the peripherals of my vision as I trekked through the outer lying area of Portswood, this thriving and growing city strange to me then, since I had yet to make it my home. The exterior was rugged, a sturdy pub/venue that had been chiselled by heavy guitar strings and punk memorabilia to emerge from within the non-descript brickwork of its suburban surroundings.

It was the name that lodged in the tourist’s log of my memory, though my liking of that spiky New York four-piece was to ill prepare me for the various delights of one of Southampton’s most iconic and revered venues. Now housed in new lodgings, amidst the similarly non-descript residential area of the Polygon within the centre of the city, it continues to attract a diverse and acclaimed array of artists, from Jazz to Folk, Punk to poetry. Last night’s show, in honour of the vinyl release of ‘Dan O’Farrell & the Difference Engine’ by the group of the same name, was no different.

Before you climb any further down this article, from paragraph to paragraph as rung to rung, I would like it to be known that it will be a piece that will not feature as an aid to describing these three acts under review any comparisons to other artists or bands; nor will it dabble in genre terms or categories. Though it may help the inner ear to construct a soundtrack to the words of the reviewer, it can, in my opinion, sometimes exhibit a flagrant laziness, and I have spoken to far too many frustrated musicians about the inadequacy of labelling to do the same on this occasion. Thus, I hope, it will demonstrate a respect for the unique talent on display.

Much like last night’s venue The Talking Heads, its man-of-the-moment, Dan O’Farrell, is a local legend found under new circumstances. Described in an article for The Quietus from 2013 as ‘possibly the smartest Southampton songwriter’, O’Farrell has the reputation of an elder statesman on the Southampton scene combined with the earnest excitement of a teenage frontman performing outside of his bedroom for the first time.

Despite the acclaim of the work amassed by former cult band Accrington Stanley, whose 20 year catalogue includes two albums, Fathom and Lovehood, ranked amongst the top 100 of John Peel’s online archive, he is a man of humility and renewed creativity, as the busy schedule and stellar debut album of new outfit The Difference Engine attests to. And unlike an elder statesman, laying out his laurels of a Thursday night to let others bask in the stale sweat and busted ear-drums of successes past, he and his Difference Engine keep not the company of old friends and erstwhile support acts on last night’s bill, but choose instead to synchronise their artistic hunger with two young and highly acclaimed local acts, fulsome four-piece Shy Boy and divine duo Lucas & King.

The centre-piece of the night’s musical plans is without question the vinyl release of the simply titled ‘Dan O’Farrell & the Difference Engine’, and with the physical expansion from plastic to vinyl, so too sees the typical line-up of drums, double bass and guitar/vocals expanded to include an orchestral compendium of delightful accompaniment. We are treated to a string quartet, pedal steel and glockenspiel, amongst other instruments, throughout this eclectic evening, though not before it begins with Lucas & King. 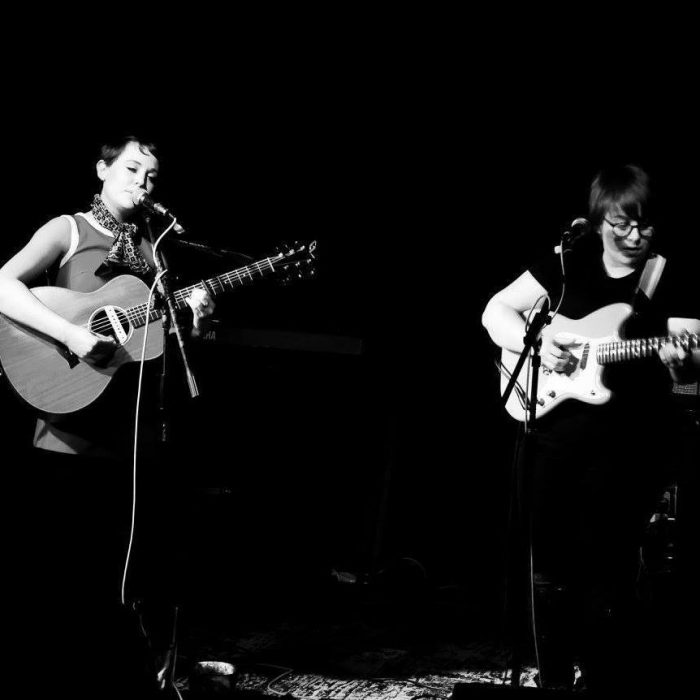 Playing to a half-full room, no mean feat for 8pm on a Thursday, Bo Lucas on guitar/lead vocals and Hayleigh King on lead guitar/vocals coax the collective ear into an attuned standstill. ‘Married Now’ is a beautifully-crafted and engaging opener, King’s rolling guitar aping the purposeful gait of a bride gliding down the aisle, with Lucas’s conspiratorial vocal, that leaps in the song’s bridge to the vaulted heights of any church rafters, singing from afar. ‘What If I’ steps upon firmer fertile creative ground still, its irresistible elegance crying out for a mournful horn section that is nonetheless not required, what with its gorgeous melody riding atop more expert guitar work.

Throughout their half-hour or so long set, Lucas holds the stage with a doll-like grace and balletic poise, holding the audience’s attention with the aloof confidence of a basement beatnik – who wouldn’t be confident with a voice like that? King is ever reliable for a subtle placement of the rhythm track, or a gilded guitar lick or two. She is also relied upon for wry and unabashed sarcasm between songs, commenting that expecting the worst to happen is a common-sense comfort, ‘cause, hey, if you knows it’s gonna happen, that ain’t so bad.

The dark and mournful, and a wilful acceptance of those colours in life’s palate, form a predominant thematic colour scheme in the songs on show tonight, not least their closer, the stunningly stark ‘Truly Not Yours’. With King carrying the cradle-rock of the rhythm and melody atop the strings of her guitar, Lucas intensely incants lyrics that are of a refreshing and bold frankness. It is a perfect encapsulation of their set and sound, one that feels timeless and fresh at one and the same time, with enough charm and allure to fill any sunrise or drain any sunset. Expect a new EP over the summer months. (https://lucasandking.bandcamp.com/)

This Thursday night is evidently one for the songwriters, for the lyricists, if our opening act are anything to go by; that the front bar is hosting a monthly poetry open-mic seems all too fitting. Shy Boy ascend the few feet to stage-height, and are found there in the absence of their lead guitarist, double-booked for a show with another band. (With the current richness of Southampton’s music scene in its various forms, this was bound to happen at some point.)

I have seen Shy Boy on a number of occasions, and in a number of different guises: from a full four, to a three minus their drummer, to last night’s outfit of drums, bass and guitar/vocals. It is a formation that may see the typical harmonic guitar-work of Jack Wilson missed, but one that conversely brings the excellent harmonic bass-work of their bassist, Dan Kelly, to the fore. He is palpably liberated by the space on-stage and within the structure of their songs, and his playing is a joy to behold. 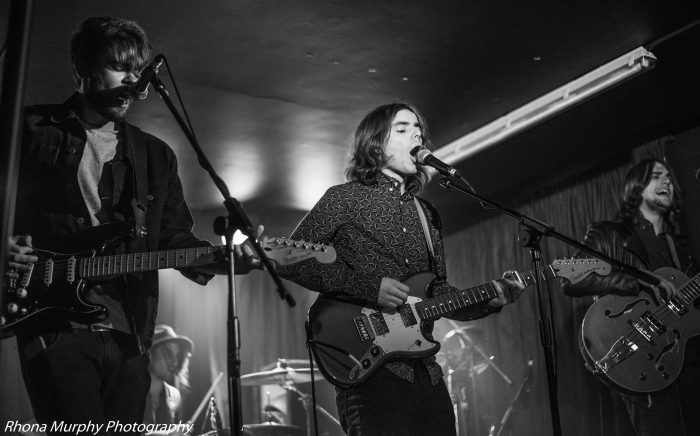 The strength of Shy Boy’s song writing is equally palpable, from the economic re-use of chords to function clever changes, to the exquisite use of harmonies. Opener ‘Childhood Lobotomy’ is a fascinating soap-opera of a song, and ‘Fire Burns Bright’ flickers with a brooding swagger before erupting in full fantastic flames for the chorus, delicately navigating the embers of verse and bridge all the while. Louis Duarte’s drumming is varied and intelligent, and Owen Hackett’s guitar and vocals remind us, along with his relaxed and jibing air in between their songs, that we’re in very good hands with Shy Boy. Their current EP is ‘Here’s to Hoping’. (https://shyboyband.bandcamp.com/album/heres-to-hoping)

And with the clock ticking on for 10pm, and attentions starting to turn to whatever Friday entails for our audience, O’Farrell’s cultured collective make their entrance to keep us firmly rooted in the fertile orchard of the present, forgetting the daily grind that even he must submit to (he is an English teacher). The room is two thirds full and in strong voice for their arrival, and responds well to a generous helping of tracks from the debut album. Among the clear and glinting favourites is ‘Rosaline Wins’, a gorgeous reframing of the lost labour of Romeo and Juliet’s love, whose melody indeed has something of the triumphant about it; so too is it the song which gives tonight’s string players, The Rosaline Strings, their name.

‘England’s So Ugly’ is another well-received number, and a true testament to the complex yet fluid artistry of Dan O’Farrell’s lyricism. It recounts a story one might think does not require a second telling, that of the refugee plight and its vivid horrors, complete with differing on-air points of view and carelessly adorned newspaper front-pages. For songs such as this, one might be forgiven for thinking that O’Farrell had borrowed it from the writings of one of his particularly bright students, so full of admirable word play and near-stream-of-conscious earnestness is it.

This generation’s voice on politics appears predominantly to belong to the hip-hop influenced artist, from Akala to Kate Tempest. O’Farrell manages to address the problems of our time with sensitivity, controlled anger and empathy, and without seeming contrived, with that all important sheen of keen honesty delivered at a breath-taking pace clothing a performance that is compelling and, above all, thoroughly human.

‘Why I Don’t Do Covers’ is an entertaining and witty addition to the trio of upbeat and rousing numbers that see the carpet being whipped up from beneath us and the set drawn to a raucous close. As the applause and cries for an encore refuse to abate in the ears of the performers now in the wings, it appears that there is still enough sugar on the floor to see us through another few tunes (we know by now that they won’t feature “ironic takes on Taylor Swift or Beyoncé”), and O’Farrell and the variously faceted and differing engine that has so magnificently driven his set of songs return to offer shades of dark and light, and then we have our end to this thoroughly excellent Thursday night. Congratulations all ‘round to Rufus Grig, Michael Davies, Mary Hyde, Louise Owen and Phillipa Baldwin, plus regular Difference Engine members Chris Walsh and Rick Foot; and, of course, Mr. O’Farrell.

As I catch up with him briefly at the ‘merch’ table, where he is holding court to a growing number of fans and well-wishers, I embrace him and congratulate him on a fantastic evening’s entertainment. He beams, and exudes the extra layer of sweaty humidity that is the musician’s spoils of victorious war with the oft harsh climate of live performance.

If ever there was an exposition of the eclectic creativity and tenacious artistry of Southampton’s music scene, Thursday 18th May 2017 at the Talking Heads was it. And whether young in years or in spirit, all three acts have an exciting future ahead of them.

(And so I made it through this article with scarcely a name-check; certainly, fewer than you’ll find on one of the tracks on ‘Dan O’Farrell & the Difference Engine’, available on iTunes and Spotify; and, of course, now on vinyl.)