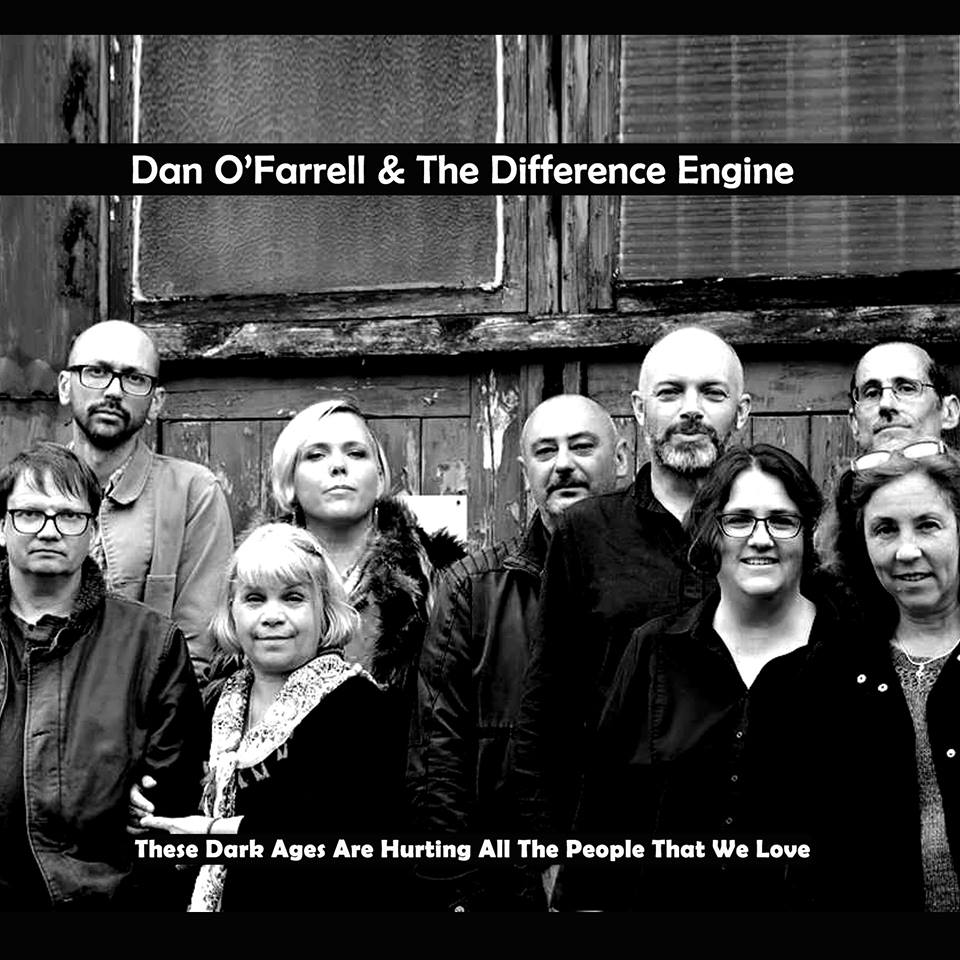 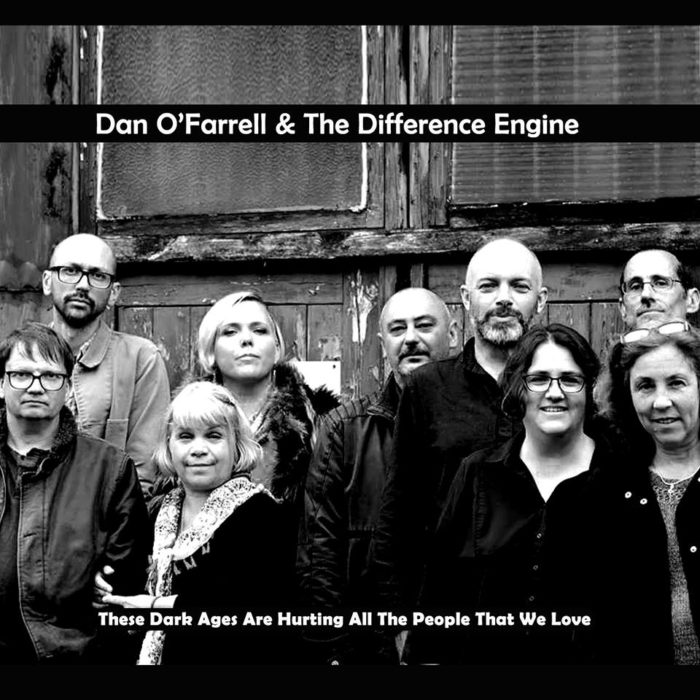 Dan O’Farrell & the Difference Engine:  These Dark Ages Are Hurting All The People That We Love  (Humphry records)

Still ‘playing the long game’ former Accrington Stanley singer and his new band release second album.  One of the best songwriters in the UK,  says Ged Babey, but still overlooked by the BBC and the Biz.

My reviews are too long (they say). Well, look at that album title.

Dan O’Farrell is a brilliant songwriter. One of the best in the UK.  He’s kinda Morrissey meets Michael Stipe via Billy Bragg and Jonathan Richman – without consciously copying any of them …But I have to add to that list Paul Heaton, as there are at least three occasions on this wonderful new LP where I was reminded of the Beautiful South…. (not that I like them… I have ‘street cred’ to keep up, my wife used to play them in the car a lot) … I mentioned this to Dan.

I like Paul Heaton’s range of topics, without ever, to my knowledge, really exploring his stuff…but I admire his ability to smuggle complex and political ideas into seemingly blithe and simple pop-songs.

Well, that’s the review written.  Dan O’Farrell has an unerring ability to smuggle complex and political ideas into seemingly blithe and simple pop-songs.

Anyone who has seem any of his 100-odd gigs in Southampton and its catchment area over the past 18 months knows that Dan is The Man: a thoroughly brilliant fellow in person and on stage.  His extended band are wonderful musicians who frame his songs exquisitely;  despite resembling the American Gothic Family Xmas Gathering when photographed in black & white.

This second album balances the personal and political even better than the first and has a natural flow – the time spent sweating over the right ordering of the track listing worth the effort.

The video to Death By 1000 Cuts a great piece of self-parody with the band locked in the perfectionist leaders garden shed,  being forced to practice to death.

Because O’Farrell is a teacher you always learn something from his songs.  I now know how to pronounce Quixotic correctly.  ( Key-otic not Quick-sotic!)

Amusingly various media platforms have labelled the album ‘Explicit’ – due to a solitary swear, in the title of ‘Shit Basket’.  It’s the only whimsical song on the album and steals the musical intro to Streetbands ‘Toast’.

O’Farrells songs have been described as wry and sardonic and do have a very English reserve about them, but on this albums songs Dan does seem to have found a way of expressing himself in a more direct and soulful way.  There are still some cynical and melancholic moments  but These Dark Ages is a more rounded, complete work.

‘True North’ is an un-ironic love song with a proper chorus.

‘Death by 1000 Cuts’ lyrically, plays with the idea of ‘love as a battlefield’

‘Through A Glass Darkly’ is a love song to alcohol, “which seems slightly less humorous the more I drink…”

‘What Can I Do?’ – is a song-writer’s lament. How can I change the world when I also want to address baser concerns?

‘The Revolution Will Not Be Trivialised’ –  the album’s ‘centre-piece’ It was written in a state of political despair  Why aren’t people angrier? Are we drugged?Dreaming? Brainwashed?

‘Shit Basket’ –  A palate cleanser. Rick says it contains his absolute favourite of any of my lyrics – ‘unfolded towels cause ineffable sadness’

‘Escape’ – a wispy dream of a song. My soundtrack to the forthcoming apocalypse. Head for the hills…

‘Ghosts’.  It’s about time and memory.

‘Safe House’ – My Trump song. Dangerous times. Anyone decent is being chased into the shadows – particularly in America, but everywhere really. Can we rebuild from here?

Cold Circuits’ . About modern loneliness, despite all our inter-connectivity.

When I reviewed the bands first album I lambasted BBC 6-Music and their Introducing policy and none other than Tom Robinson replied in the comments.  Quite a coup I thought. At last, someone taking notice, not necessarily of me and my opinion, but of Dans work .  A couple years on and the Difference Engine are still at the back of the BBC Introducing queue.  6-Music fawn over Damon Allbrans latest post-Brexit self-indulgent nonsense and the nation yawns.

These Dark Ages Are Hurting All The People That We Love is a warm, kind-hearted album about love in hard times, passion and compassion.  Musically it has more of a swing that the debut. The string section and lap-steel are no longer just embellishments but fully part of the songs.  And they are really great songs; crafted, literate, considered.  The musicianship accomplished and gently under-stated so that what you come away with are words of hope, words of wisdom and a message of love – that it will hopefully conquer all, if we keep our fingers crossed.

the album on Spotify

all words by  Ged Babey