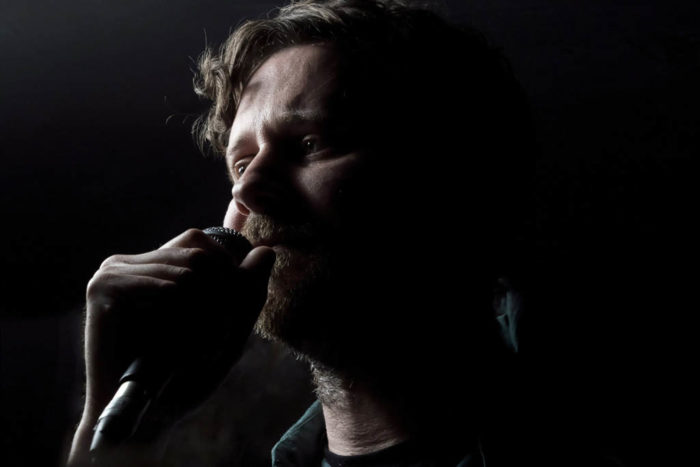 Dan Mangan brings his pop-folk-country to the people of Manchester leaving sore throats in his wake. A night of the unexpected fun from down in the Basement.

“I’ve got a moustache hair up my nose,” the singer says as he stops halfway through his mid-set acoustic number. The crowd keep singing while Dan Mangan sorts out his nasal intrusion.

It’s Saturday night, and while YES bar upstairs moves and shakes to the sound of disco, the Basement is a quiet introspective place.

Dan Mangan is exactly the sort of grown-man-next-door Canadian I’ve come to expect from this sort of show. My wife, also a Canadian but without a beard, has taken it upon herself to open my ears to the music of her native land. As a result, I’ve seen my fair share of half-arsed acoustica, bearded banjo players and plaid shirts. It’s been, on the whole, tiresome.

Not so tonight. From the opening number, Dan grabs the crowd by the proverbial and delivers a show that, gauging by the number of smiles, goes down a treat.

Even the bloke next to me, who looks like he’d come from a cage fight, sang along as Dan and his band delivered a set full of oldies, and newbies.

Shortly after Road Regrets, I realise that I, having been dragged along by my wife, am in the minority. I drop my jaw and wiggle it around a bit, pretending to know the words lest I be found out

…is an odd place for such a show, and I can’t help that feel Dan and his band would be better suited to a place where they can mic up the drum kit without losing the texture of the acoustic guitar or vocal. Considering the limitations however the sound was pretty good.

For about three numbers which I (or rather, my wife) couldn’t place Dan’s band leave the stage and the frontman serenades and takes requests. Once more, the crowd sings and I mouth along like a lemon. 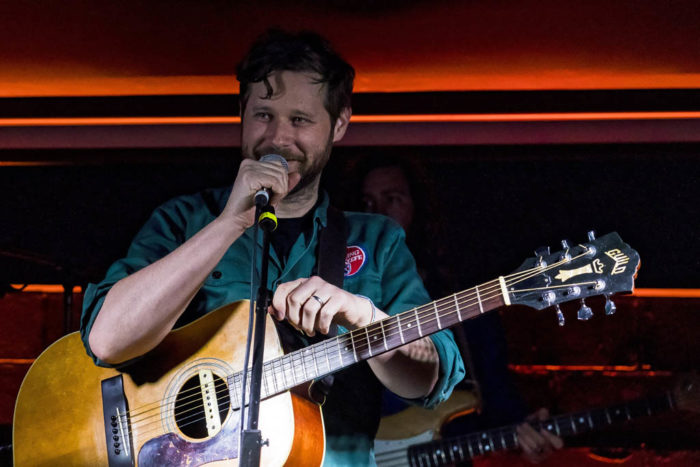 When the band return…

…they make their way through Basket, Fool for Waiting and the uncharacteristically upbeat Haunted by a Melody before playing Peaks and Valleys – a song about support act Steven Adams and his wife Sally.

“For the record, Steven’s wife is called Sadie, not Sally.”, Dan says about his two friends, “but Sadie doesn’t rhyme with valley, so I had to change it. She’s suffered for the song.”

One of the things I really liked about this show was how personal his relationship with the crowd and his support act were. Pretty much everyone in the room had a connection to a song or two – and Dan is humble in his delivery.

“I never thought, when I wrote these songs, that years later people across the ocean would be singing them back to me.”

For the closer, Steven joined the band onstage and Dan asked the audience for a chair to stand on. He then mounted said chair and brought out a device called ‘the hammer’ – essentially a pole with a lamp on it.

With two hands clutching his microphone, and about 10 hands holding his chair in place, he flicks the light on and teaches the audience their lines.

“If you feel like you’ve got a harmony in your loins, go for it.”

The whole thing is a bit unexpected, odd even. A bloke on a chair holding a lamp which highlights all the scrappy looking faces staring up at him was not what I imagined when I came in here. But hell, everyone else seems to dig it and when the band joins in the final crescendo is just about beautiful.

A note on the support…

We sadly arrive after Steven Adams has finished his set as apparently, the timings on the door changed last minute. Sorry, Steven – we’ll catch you next time.

You can find Dan Mangan on the interwebs, here, and on Facebook. You can also find Steven Adams (the folksy singer one, not the basketball player), here.

Pictures by the talented Mr John King – you can find more of his lovely work here.

All words by Toby Cryne. More writing by Toby on Louder Than
War can be found at his author’s archive. He doesn’t tweet.