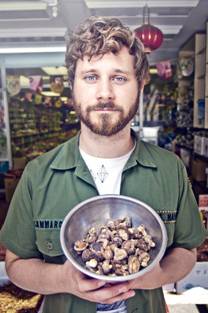 In light of Springsteen’s new single dropping, it’s a bit of a folky day at Louder Than War Towers*, so we thought we’d mention that indie folky beardy type (I know, sounds shit/Bon Iver-ish from that description, but he really isn’t) Dan Mangan is heading back over to the UK from Canada for a bit of a tour.

*We don’t have an office.

Dan Mangan will be returning to the UK in April, and will be releasing ”ËœRows of Houses’ as a single on March 19th. There’s a video for the track below.

After rounding off 2011 with a stellar performance at End of the Road’s Christmas Shindig at Cargo in London, Dan Mangan will be returning to the UK in April for an 8-date tour, kicking off in Brighton on April 27th. The full list of tour dates can be found below. Mangan will also be releasing new single ”ËœRows of Houses’ taken from his critically-acclaimed album Oh Fortune on March 19th.

Inspired by the film Stand By Me, ”ËœRows of Houses’ will be released on March 19th through City Slang. Stirring, deep and dabbling with themes of mortality, the track is one of the Polaris Music Prize-nominated Canadian’s darker efforts and its accompanying video reflects these ideas, many of which appear throughout ‘Oh Fortune’.

Having performed at numerous festivals from Glastonbury to End of the Road and joined the likes of The Walkmen, The Decemberists and Okkervil River on tour; Dan Mangan will be playing the following UK dates: