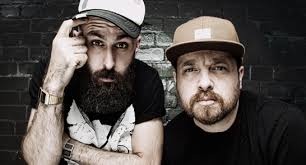 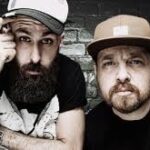 The joint is literally jumping.

From one end of the tent to the other there is a seething mass of joyous humanity celebrating the Brit hip hop fused duo Dan Le sac and Scoobius Pip dealing out their joyous but with a great cutting political edge music that incorporates a whole mish mash of styles reflecting the great record collections of British youth in our multiracial multicultural society that can embrace hip hop, grime, American hardcore punk, industrial music post punk and even Mogwai into one melee of sound of their own making them UKIP’s worst nightmare.

They do all this in such a joyous way that they are utterly infectious and the songs pour out built around Dan le Sac’s great battery electronics where he embellishes the breakbeats with his own finger popping drum clicks and noise squelches. Dark droning bass lines combine with killer beats that are built to dance to without every pleading and the party is on.

This is a party that brings the melancholy and the darkness of a November small town British night to its table and the lyrics reflect this. If British rap used to struggle because it was trying to copy the big brash American fat cigar bragging Scoobius Pip show just how it can be done with lyrics that detail his own life and fears and victories with a infectious and yelping Essex accent that sounds so familiar but has a perfect delivery as it deals a very British humour to make its point in that grand tradition of great British poets like John Betjiman, John Cooper Clarke etc – our own lineage of rap in a sense.

For two guys and one set of keyboards and a settee and a couple of books to read form in their stage set- the pair of them make a fearsome racket- they have the power of Minor Threat who get a mention in their lyrics and the rainy day dark heart of Joy Division and the pounding dance floor sensibility of the Prodigy who they quote in the end of set astonishing beat freak out from Mr. Le Sac.

They deal out a very British self deprecating humour and powerful message- this is the real England- a good place with good people doing good stuff and the perfect party band.