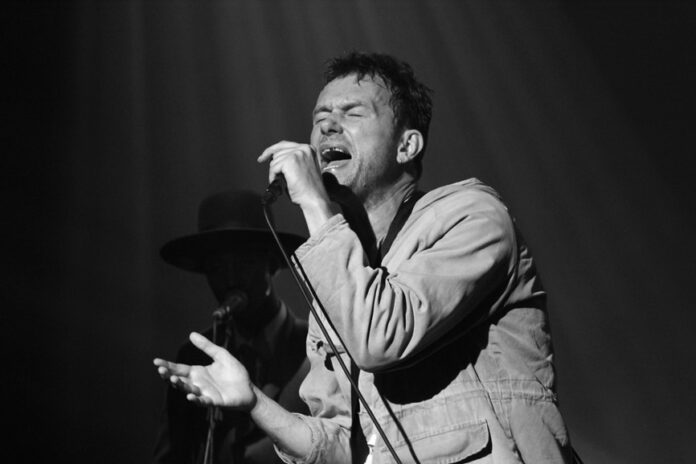 Oh Damon you are so damned good.

Last Sunday, Buenos Aires played host to one of the most awaited events of the year “El Superclásico” between River Plate and Boca Juniors. Last night (October 6th), Teatro Gran Rex, an Art Deco style theatre opened in 1937  and one of Buenos Aires most important venues, played host to one of Britain’s finest, BLUR’S frontman DAMON ALBARN. The theatre has 3,300 seats and it is one of the city’s most important venues for the staging of international shows.

The tracks ALBARN played during his elegant 85/90-minute set came from different albums – from DAMON’S work with Britpop icons Blur, his project with Jamie Hewlett GORILLAZ, THE GOOD THE BAD & THE QUEEN and also his debut album “Everyday Robots”.

ALBARN was accompanied on stage by his backing band THE HEAVY SEAS. In a way, it was good to see that he isn’t just playing his most popular songs every night, the setlist is usually mixed up from gig to gig to keep it interesting so the songs tend to vary. For instance, this time, ALBARN included “END OF A CENTURY” instead of “POISON”, track he’d played at previous shows.

The pacing of the set was really good, it seems he deliberately decided to play the quieter, slower songs at the right times to change the mood of the night. There was such a good vibe in the crowd and Damon and the Heavy Seas on stage were clearly enjoying themselves, smiling a lot and giving genuine thanks for the crowd’s appreciation. I guess it was just as good as we expected it to be as the Argentine crowd LOVES DAMON ALBARN. During the quieter songs there was hardly any noise, just the occasional “I love you Damon!”.The place was pretty intimate too as he played at TEATRO GRAN REX which despite being a relatively big theatre, it still maintained that intimate atmophere.

With the whole of his debut solo album, EVERYDAY ROBOTS, DAMON ALBARN is placing himself  in the role of thoughtful and reflective singer-songwriter, an aspect of his personality that may go ignored at times when you look at BLUR or even GORILLAZ. This is a much more personal and intimate show than the BLUR ones for sure.

ALBARN came on stage and greeted the audience saying “BUENAS NOCHES!” before setting the mood of his first gig  in Buenos Aires with “LONELY PRESS PLAY” song taken from his debut Everyday Robots, a beautiful ballad which seemed to let everyone know what the night was gonna be about. Then it was the time for “EVERYDAY ROBOTS” an amazing song which tries to explain how we have evolved into “Everyday Robots” being so immersed in technology “We are everyday robots on our phones, in the process of getting home…” Technology is so amazing and useful but there are times we allow it to completely take over our lives, don’t we?

The whole thing was very intimate as his debut album itself. Talking to Aitor Throup (Albarn’s creative director) a while ago he revealed to us “I wanted to show the inside of ALBARN. The fact that everything is out. That everything is exposed. And that’s how his record is as well, it’s really personal. It’s really bearing everything out. So it’s all about him, it´s all about bearing him exposed”

There were very special moments throughout the night at TEATRO GRAN REX for example when he sat on the piano to delight the audience with a version of “PHOTOGRAPHS (YOU ARE TAKING NOW)” followed by“KINGDOM OF DOOM” song by that superband he formed THE GOOD THE BAD AND THE QUEEN also on piano.

Guess that as usual ALBARN was in a very good mood, he seemed happy and he was very talkative even telling some stories in between songs, telling the audience he was very fortunate to be there and to have had the chance to play in several places in Latin America. He even thanked them for having him there. Amazing!

Then it was time for some GORILLAZ tracks like “EL MAÑANA” and “DON’T GET LOST IN HEAVEN” which paved the way for a beautiful piano version of BLUR’S “OUT OF TIME” . Electric guitars back again for “ALL YOUR LIFE”joined again by THE HEAVY SEAS onstage and the second “Buenos Noches” before the sort of obligatory encore saw ALBARN returned to the stage to play a piano version of “END OF A CENTURY” but before that, he took the time to introduce a boy from Iceland who played the trumpet during the song. Guess this was the funniest bit of the gig, ALBARN started singing “SEX ON THE TV, EVERYBODY’S AT IT, THE MIND GETS DIRTY AS YOU GET CLOSER TO THIRTY…” when he stopped for a bit and went “Oh F#####” and immediately stood up. The thing is he realised he’d started singing the second verse not the first. He sat on the piano and then joked saying the band hadn’t played for two months and they had to rehearse and then the jetlag and all that and he got a bit confused and sang the second verse instead…”I’m terribly sorry about it” laughed and said “It actually starts like this “SHE SAYS THERE’S ANTS IN THE CARPET…” and everybody started singing along for the hundredth time.

As the song was about to finish, THE HEAVY SEAS were getting ready for another highlight of the night “CLINT EASTWOOD”. This time ALBARN introduced M.ANIFEST, everyone gave him a big hand and the fun started again … DAMON ALBARN started playing and the crowd started singing in unison …“I AIN’T HAPPY, I’M FEELING GLAD I GOT SUNSHINE IN A BAG …”
Now something Ihave always wondered is: “Why does a large crowd of people singing in unison never sound dissonant ?” I would certainly like to know that but well…it did sound great definitely. One of the highlights of the night , at least for me and some of my mates. Then, back again to the quieter songs, this time MR TEMBO, a track dedicated to a baby elephant DAMON ALBARN met in Tanzania.

The music was great, the performance was brilliant and ALBARN…what an artist and frontman the man is! He’s so good, so damned good. He did almost everything, sang, played piano, played acoustic, electric guitar, jumped, danced, walked on stage and went absolutely mad at times. THE HEAVY SEAS were absolutely brilliant as well, bunch of great musicians: former GORILLAZ and BEADY EYE’S JEFF WOOTTON on guitar, MICHAEL SMITH on keyboards, PSM on drums and SEYE on bass guitar) and although DAMON was the star of the night, everyone gave the band a big hand.

We can be sure about one thing ALBARN, as well as other Britpop icons, has influenced a generation of new musicians for years and having seen what we saw last night in Buenos Aires we can assume that he will continue to be a major influence for years to come … the doors of the Gran Rex were opened and that cool October Monday night brought us back down to Planet Earth but in sweaty tees and in need of a nice cold drink.

So thank Rock Music for that and see you soon Mr Albarn!

Three Changes (The Good, the Bad & the Queen song)

Photographs (You Are Taking Now)

Kingdom of Doom (The Good, the Bad & the Queen song)

Out of Time (Blur song) (Solo)

All Your Life (Blur song)